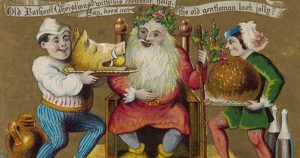 A yule log softly illuminates a dim living room, emanating warmth from the comfort of its hearth. Mistletoe hangs unsuspectingly upon smiling doorways. The great evergreen tree sits decorated in the corner of the room with an assortment of stars, bells, and lights, busy winking back at their joyous families. Illuminate a spread of wrapped gifts. A nativity scene hangs above the fireplace, and all are at peace. This is the typical Christmas scene around the Christianized world. But these traditions have a time stamp, and though the birth of Christ is at their point of celebration, it is not how it started. The Winter Solstice, the coming of Spring, and the anticipation of a bountiful harvest are where these rituals take root. Across Europe, this time of year has been celebrated for centuries and has taken many names. Just like a gift lying under a tree, the traditions of Christmas were left to us by our predecessors to enjoy. Although they may not be as vivacious and straight-out debaucherous as they once were, their light guides our way out of Winter and into Spring. US Ghost Adventures showcases these Ancient Christmas Traditions for you below.

Gift a tour with US Ghost Adventures this Christmas!! 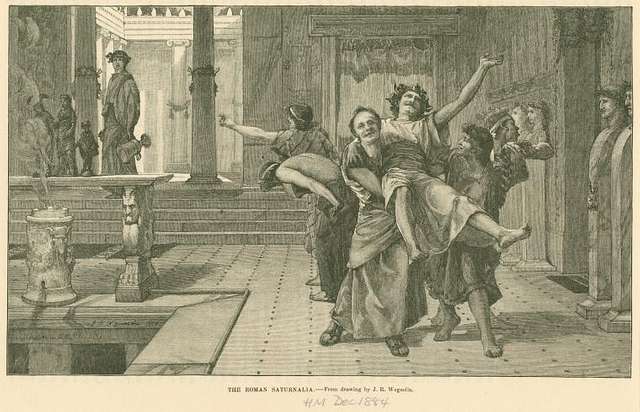 The feasts are one of the most enjoyable and generally most regrettable as time passes. Copious amounts of food are piled high every year. Liquor intake, along with the calories, rises as well. In the Roman days, centuries before the birth of Christ, this time of year was known as Saturnalia. Saturnalia was a festival held in honor of the Roman God Saturn, the God of agriculture, abundance, and time. Social norms and proclivities were thrown out the window. Great feasts, parties, and celebrations were held to honor the harvest of the previous year and the year to come. Documentation of the festival began in 217 BCE, but it likely began well beforehand. It was first practiced by pre-Roman farmers. In Roman mythology, Saturn is known as the God that gave humankind the knowledge of agriculture. As such, it was continuously one of the liveliest festivals in Roman history. Originally only one day, December 17th, but by the late Roman Republic, it had blossomed into a weeklong holiday.

Slaves became masters and vice versa. Gambling was rampant and lecherous activities were encouraged and welcomed. A mock ruler, “the lord of misrule,” would be crowned yearly. Upon taking their place on the “throne,” they would spread social chaos across the festival in any way possible. Gifts were given, such as candles, terracotta statues, and sweets, at the end of the festival, a time known as “Sigillaria.” These traditions carried their way into the Anglo-Saxon version of the festival, The 12 Days of Christmas. As the Roman Empire became Christianized in 331 CE and the birth of Christ was officially dated to December 25th, Saturnalia slowly merged into “Christe Masse,” or Christmas. Although not falling under the same name, the acts of gathering, feasting, and celebrating close to the Winter Solstice were practiced all over Europe. The Roman Catholic Church was aware of this, marking the celebration of Christ’s birth at the Solstice to sway new followers into the fold. These glutinous feasts are still held by most in the Christian world.

In territories further north of the Roman Empire, the Gaelic and Frankish countries of Europe, and the Scandinavian Norse lands, the Winter Solstice was met with just as much jubilance. But for these northern revelers, Winter meant little sunlight, cold weather, and harsh conditions. Agriculture came to a standstill, and animals that could not be fed in the winter, such as cattle, were killed and devoured along with large amounts of Ale. This time of year for the Nordic people of the north became known as Yule. Dating back thousands of years, the pre-Christian tradition of “Yuletide” became associated not only with the dates of the winter solstice but with the entire winter season. English Monk and Historian Bede documented the earliest reference to this time. He referred to it as “Giuli,” it was a time period that designated the beginning of the Winter Solstice and the proceeding two-month period. By the 10th century, “Yule” and “Christmas” had become one when the Norse king Haakon The Good, returned to Norway from England as a Christian. In many countries with Norse lineage, the word Yule and its cognates are used to reference this time of year. 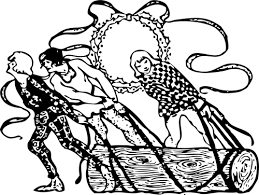 The “Yule log” is one of many traditions that stem from the merging of “Yule” and the “Christe Masse.” A log was kept lit during the dark Winter months to bring good luck in the New Year. It was often decorated with hand-carved runes and other adornments such as pine cones, ivy, and sprigs of holly. Rubbed with salt and wine by unwashed hand, these logs were burned for twelve hours and could not be stoked as long as the family was at the dinner table. Ghost stories were told around the log, and the storytellers’ shadows were interpreted to predict fortunes in the New Year. The ashes were kept for further blessings. The remnants of the log were saved in order to start next year’s fire. The evergreen tree was also a sign of good fortune. Evergreens were brought inside as precursors to modern Christmas trees.

Ancient Christmas In A Modern World 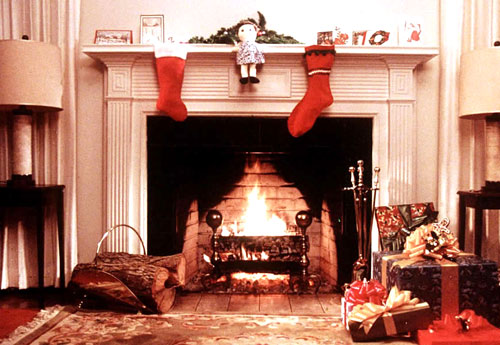 While Christmas may look a little different today, it is not too far off from the equinoctial celebrations of Christmas past. As Christianity spread, these ancient traditions merged under the celebration of the nativity. Its length has varied across different times and cultures; one-day, a week, and then on to twelve. Coming back full circle to our simple, singular modern day. Perhaps revels should rejoice, as history often repeats itself. We may have a twelve-day holiday yet again! But for now, the needles of the ancient evergreen grow further and further away from its roots. Luckily US Ghost Adventures is here to bring the 25 Days of Christmas to your minds and hearts. Continue reading on with us for more Yuletide facts and tales!