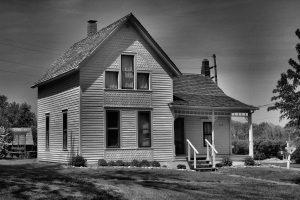 It was a quiet evening in 1912, and a family was at home for the night. A father, mother, four young children, and their two sleepover guests were enjoying their peace and each other’s company, unknowing that it would be the last time they would ever see each other alive. Read on to learn more about the infamous Villisca Ax Murder House.

Josiah Moore, his wife Sarah, their four kids Herman, Katherine, Arthur, and Paul as well as two young guests Ina and Lena Stillinger were brutally murdered in the family home in a grisly case that shook the small town — then it went cold. Some of the more unsettling details from the crime scene, aside from the brutality of the killings, include a door locked from the inside, linens covering the windows, and even a hidden attic. When investigators searched to find who could commit such a heinous act, all of their leads were dead ends. Despite numerous suspects, two trials, and even a confession, the case was never solved.

It was the summer of 1912, June 10th to be exact, when a stranger broke into the sleepy Villisca, Iowa home and bludgeoned its eight sleeping inhabitants to death. Joe and Sarah Moore were asleep upstairs, while their four children were in a room just down the hall. In a guest room were the two Stillinger sisters, there for a sleepover.

Shortly after June 10th turned to June 11th, someone entered the home through the unlocked door – which was not uncommon, as the town was considered safe and friendly – and took an oil lamp from a table. They turned the lamp down low, only supplying enough light for one person, they made their way through the home, hunting. An oil lamp in one hand, an ax in the other.

Ignoring the Stillinger sisters at first, he made his way up the stairs, guided by the flicker of the lamp. Creeping past the room with the children, the stranger visited Mr. and Mrs. Moore’s bedroom first. Then the kid’s room, then the Stillinger sisters downstairs. As quickly and quietly as the stranger came, they were gone — taking keys from the home and locking the door.

The sun rose on the home the next morning, but the house lay eerily still. Neighbors became suspicious as the home was usually filled with life. They alerted Joe’s brother, who came to take a look inside. He let himself in with his own key, and discovered the entire family had been murdered, the home soaked with blood.

Police Arrive On The Scene

Police determined that the Moore parents had been murdered first, which is no surprise as they were the only ones who could have defended themselves and the children against the attacker. The ax used to kill them had been swung with such force and held so high above the head of the killer that it gouged part of the ceiling out above the bed. Joe alone had been hit over 30 times. The children weren’t in any better shape, as was Mrs. Moore.

The state of the bodies wasn’t what concerned police the most, however, as a certain sort of ritual was obvious after searching the home.

After murdering the Moores and the Stillinger sisters, the killer had done a sort of ritual, one could say. He had covered the parent’s heads with sheets, and the Moore children’s faces with clothing. He then crept through each room of the home, covering all of the mirrors and windows with any cloth and towel he could find.

There was even a two pound piece of bacon from the fridge found in the living room with a keychain. The killer had even washed his hands in a bowl of water before leaving the property.

Once police, the coroner, and a minister had arrived at the home, word of the crime spread around the town. Officials told townspeople against going inside the home, but once the investigation was over, over 100 people entered the property to see what had occurred. One of the townsfolk even stole a fragment of Joe’s skull as a sick keepsake. (Perhaps they should have investigated him!)

As for the murdered, investigators had close to no leads. A few efforts to search the town and the surrounding acreage of countryside were made, but with the five hour head start the killer had, he would have been long gone. Bloodhounds weren’t able to detect any scent, either since the crime scene was completely demolished by curious townspeople.

A few suspects were named over time, although none of them panned out. One was Frank Jones, a local businessman and competitor of Joe Moore. Joe had worked for Frank before starting his own rival farm equipment business. There was also rumors of an affair that Joe was having with Jones’ daughter-in-law, although these claims are unfounded.

The second suspect seemed much more likely, and even confessed to committing the murders, even though he later recanted that statement as claimed he was beaten by police until he confessed.

Lyn George Jacklin Kelly was an English immigrant, with a long history of sexual deviancy and mental issues. He even admitted that he was in town on the night of the murders, also admitting to fleeing town the morning the bodies were discovered.

He was small in stature, quiet and meek. Doubts were raised in his involvement, but there were certain factors that made him the perfect candidate. Lyn was left-handed, and it was later determined that the murderer was also left-handed due to blood spatter patterns. He also had a creepy history with the Moores, as many had seen him watching them while at church or while running errands in town. A dry cleaner in town even claimed to have received bloody clothing from Lyn a few days after the murders. Lyn also requested access to the home after the murders, posing as a Scottish Yard officer. Seems like a likely suspect, right?

After an interrogation, he eventually confessed to the murders, detailing the crime. He almost immediately took back his statement, and a jury refused to him due to claims of police brutality. For years following the murders, investigators looked into every possible lead. Was this a single act, or the work of a serial killer? Could it have been someone traveling through?

Villisca Wasn’t the Only Stop

Reports of similar crimes started to creep in from all across the country. They weren’t quite as gruesome, but they did involve an ax and an oil lamp set to burn at a low light at each crime scene. Despite the commonalities, no actual connections could be made. The case ran as cold as the killer’s heart, and the home was boarded up, sitting quietly at the end of the street while life goes on around it, undeterred by the tragic crime that was committed within its four walls.

The home has switched hands a few times over the past century, and the reports of unexplained phenomena just keep coming. disembodied laughter and children’s voices play over and over like a record, repeating the last night of the lives of the kids in the Villisca home. Unexplained screams, movements, and even a strange fog have also been reported. Unusual behavior of visitors to the house also points to possessions occurring at the home.

The house is a paranormal hotel these days, where groups of six or fewer can book an overnight stay in the home. The owner of the home, Martha Linn had her own comment to share.

“I feel like there’s something there… If indeed there are spirits, you have to realize that six of them are children… I don’t know if the murderer still exists there, but there have been a few things that’ve happened that aren’t exactly calming… but I don’t like to dwell on it.”