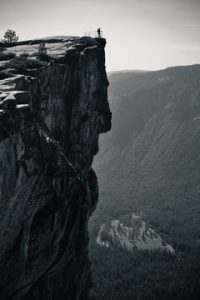 A haven of sycamore trees and gorgeous landscapes, Turnbull Canyon is a four mile loop trail near Whittier, California and is part of the Puente Hills Preserve. The canyon is in the northern part of the preserve with a creek that runs down the center, giving life to the native grasses and sagebrush that dot the hills.

A quiet respite from the hustle and bustle of Los Angeles, one would think the canyon was a place for rejuvenation, but that assumption couldn’t be more untrue. The canyon is home to more than just a few local legends, tragedies, and ghostly residents.

A Brief History of Turnbull Canyon

In the early Spanish Colonial Period, several Tongva Native Americans were supposedly put to death at Turnbull Canyon for rebelling against the Spanish and Franciscan Friars at the nearby Mission San Gabriel. As a result, the canyon was given the fitting name ‘Hotuuknga,’ or the place of darkness and death.

Turnbull Canyon was named after the Scottish immigrant Robert Turnbull after buying the canyon from Quaker businessmen in the 1870s. He later sold the land back to the Quakers in the 1880s for a profit, but Turnbull’s luck ran out shortly after when he was murdered in town. The Quakers decided to name the canyon after Robert in his honor.

Oil exploration and drilling creeped into the canyon in the later 1890s, and in November of 1900, two oilmen were chased out of the canyon by two very large cougars, perhaps a foreshadowing of the events to come in the canyon’s future? Or maybe it was Native spirits, protecting the canyon from the environmental destruction oil drilling causes.

A Rocky Past With Native People

One of the most popular reports coming out of the canyon is that of Native American spirits that haunt the canyon, livid that their land was stolen from them. In the mid 1840s, there were numerous conflicts over the ownership of land all throughout California — Turnbull Canyon was no different. California belonged to Mexico at that time, and the United States as attempting to annex it. In earl 1845, William Workman became captain of a group of Europeans and Americans serving Governor Pio Pico in his fight against Governor Manuel Micheltorena in the battle at Cahuenga Pass during the Mexican-American war.

Following the victorious battles, Pio Pico was appointed the governor of Alta, California and he awarded William Workman 49,000 acres of land, which included, you guessed it — Turnbull Canyon. Workman did not get along well with the Gabrielino tribe people of the area, who were the original inhabitants of the canyon. Even before Workman claimed the land, Spanish conquistadors invaded the area with brutal force, shooting tribesmen as they tried to defend their women and children.

Given this tragic history, it is said that the spirits of the Gabrielinos haunt the canyon, angry and willing to chase anyone out who enters the canyon. The sound of yelling and the beat of war drums have also been reported.

Robert Turnbull arrived in California in 1873, where he lived until he was murdered in 1888. He was a shepherd who moved to California in an attempt to make a living selling real estate. The first plot of land he purchased was located in Los Angeles near the Macy Street Bridge, now known as the Cesar Chavez Bridge. (This little detail is important later.)

It’s reported that not long after his arrival, Turnbull started to be known as the town drunk. People he did business with and his friends stated that they had never seen him completely sober. His drunkenness would later become a leading factor to his murder.

Around the same time that Turnbull was buying up property, the owners of the Temple-Workman Bank were poorly managing their business. In 1875, the economy of the state of California was so terrible, they were unable to meet the demands of the townspeople. The bank was closed in January of 1876, and plans to foreclose the property were set forth. William Workman ended his own life a few days later.

Turnbull was later appointed to an advisory committee that was attempting to get the townspeople their money back. Due to his connections, he was able to purchase land for cheap. He bought the canyon, because it was a great place for him to raise his flock of sheep for the wool that had made him wonderful profits.

In 1885, two Quaker men, Aquila Pickering and Jonathan Bailey were searching for land in California to start a new colony. They purchased the land surrounding the canyon but when they saw that the canyon had an active stream, they approached Turnbull to attempt to buy it from him. Turnbull refused.

For two years the Quakers made him offers, and in June of 1887 they presented their highest offer, $30,000. Finally, Turnbull accepted.

On January of 1888, Robert Turnbull spent the evening drinking. On his way back home, he fell from his horse and was arrested for public drunkenness. The next morning, he returned home beaten and bloody. He could not remember how he had gotten into such a horrible state. As a a result of these injuries, Turnbull suffered a brain aneurysm that the town coroner said was the result of a blow to the head. The aneurysm caused Turnbull to fall from the Macy Bridge, right by his first plot of land, and his body was found in the L.A. River. Seems like a cut and dry case, except the coroner stated that Turnbull had been murdered. This was no accident. Who would want to kill Turnbull? That’s a mystery that still carries on to this day.

The sun, nestled in the peaks of the canyon, a soft breeze and a peaceful view… one would never imagine the tragedy that struck the canyon in 1952.

On April 15th 1952, the L.A. International Airport control tower lost contact with Louis Powell, the captain of flight 416. The plane was expected to land in Inglewood sometime around 3:30 a.m., but it never made it to its final destination. Several calls were made to Captain Powell and the crew, but a response never came.

Around 10 a.m. that same morning, a rancher was driving around Whittier Heights when he saw smoke rising from the hills of Turnbull Canyon. Concerned, he climbed to higher ground and saw flames all over mangled pieces of steel, smashed into the hillside. It was flight 416.

The reason why the plane had crashed is because Captain Powell decided to fly 10 feet below the suggested altitude. It had been extremely foggy that morning, and he wasn’t able to see where he was flying. As Powell navigated the canyon practically blind, its wing scraped the side of the canyon and spun out of control, bursting into flames upon impact. As authorities cleaned up after the crash, they figured out there was twenty-nine people on board at the time of the accident. All of them were said to have died on impact.

People visiting the canyon today report seeing billows of smoke, as well as the sounds of ‘bombs going off,’ which can be assumed is the sound of tons of steel hitting the hillside.

Another legend exists in the canyon, known as Hell’s Gates. Stories of satanic worship, cult meetings, and skeletons of ‘unbaptized babies’ are reported, but hold no weight in truth. The dusty trail does leas to a barbed wire fence with ‘No Trespassing’ signs, piquing the curiosity of those in search of the unknown. Rusted chains hold a gate shut, and overgrown desert brush blocks the view of what lies beyond. Unfortunately, the answer to that question does not lie in this article. Some say it’s the foundation of an orphanage, some say an abandoned mental asylum.

True Horror Stories of the Canyon

One story that is based in complete fact, is that of Gloria Gaxiola. She was shot in the head by two of her ‘friends’ on Turnbull Canyon Road before she was accidentally dragged for four miles to Hacienda Heights. Her body was found at the crossroads of Hacienda Boulevard and Colima Road. It’s said, that unknown to her killers, her foot was stuck on a seatbelt, and when the door was closed and the car was driven away, Gloria was dragged along with it.

Three suspects were named and arrested, Abraham Acuna, Mathew Garcia, and Victor Monge. Gloria had been friends with the three, and they were all convicted of first-degree murder.

Their reasoning? They were worried that Gloria was going to testify against them for a robbery they had committed, and decided that killing her was the only way to prevent that from happening.

The following year in 2009, Christine Martinez was stabbed and slashed with needles and left to die in the area. In March of 2011, another woman was found in the canyon’s ravines. Parts of her body were missing. Her identity has yet to be uncovered.

The dark energy of the canyon is palpable. Visitors who come from the views don’t stay long, and report the feeling of being chased out of the canyon or watched intently. Who are the spirts in the canyon? Could the victims of all of these tragedies be stuck here? Why is the canyon home to so many unfortunate circumstances? As we end this article with more questions than answers, perhaps you’ll just have to visit the canyon and find out for yourself.

The Ascension to Hell: The Haunted History of Turnbull Canyon