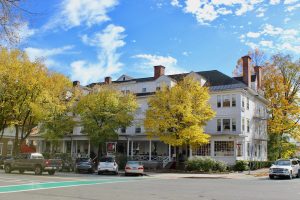 A charter member of the Historic Hotels of America since 1989, The Red Lion Inn dates back to 1773. This historic inn has been one of the most frequented in the Berkshires for generations upon generations. According to tradition, the inn first appeared on the corners of Pine and Main Streets in downtown Stockbridge, Massachusetts, during the early 1770s. It started as a quaint tavern and inn, created by Silas Pepoon, but it soon prospered with the traffic between Boston and Albany.

The Red Lion Inn, like other historic inns in Massachusetts, had connections to the Revolutionary War. Protests occurred at the Red Lion in regards to the British Parliament’s Acts of Intolerance amid the buildup to the American Revolution. Soldiers affiliated with the Continental Army even passed through The Red Lion Inn once the fighting had started.

Below you’ll learn the stunning history of this Inn, the stories of those who passed through it, and the hauntings that remain to this very day — and after your virtual visit to the Red Lion Inn, join us for an in-person ghost tour of other Massachusetts haunted hotspots on our Boston or Salem tours!

Following a few previous owners, Charles H. Plumb purchased the inn in 1873. He renamed it the Stockbridge House, and Charles and his family immediately set out to renovate the site. New sections were added onto the building, which continued on to an ever-growing number of guest rooms. The Plumbs also brought bouts of decorations and antiques to furnish the Stockbridge. Much of the items brought into the inn were found by Charles’ wife. She obtained loads of colonial-era decor that added to the building’s fascinating history and heritage. Ghostly rumors continue to swirl at the Red Lion, which has been visited by scads of ghost investigators and mediums. The most unexplainable activity occurs on the fourth floor, where both cleaning staff and guests have seen a “ghostly young girl carrying flowers” and “a man in a top hat.”

The Red Lion Inn website states: “The Red Lion Inn is an iconic landmark whose warmth and character express timeless tradition while its vibrant personality brings to Berkshires luxury hotels. We are located in Stockbridge, MA, in the heart of the Berkshires. It’s home to the iconic Red Lion Inn as well as Maple Glen, a 17 room guesthouse that features an unexpected twist on modern country. Many charming village houses are also located on the property along with several unique lodging options such as our turn-of-the-century Firehouse.”

By the 1800s, The Red Lion Inn was capable of hosting about one-hundred guests. Things were looking up for the Plumbs with their successful inn until tragedy struck in 1896.

A structural accident destroyed the Stockbridge House in 1896. Fortunately, the Plumbs and their neighbors managed to save the decor and furniture from the inn, although the bones of the building itself were significantly damaged. The Plumbs refused to give up on their pride and joy and set out to restore the inn. It was amazingly rebuilt in just a matter of months, reopening the following spring. It soon was back to its original glory and sparkling reputation when it hosted five different U.S. presidents, including Grover Cleveland, Theodore Roosevelt, and Calvin Coolidge.

The Stockbridge House remained for ninety years, eventually falling under the ownership of the Plumbs’ distant relatives, the Treadwell family. The inn remained virtually unchanged during this time, but when the inn was facing real estate developers, Jack and Jane Fitzpatrick stepped in and purchased the inn in 1968, saving it from becoming lost to modernity.

They continued to renovate the inn, being sure that it would continue operations for years to come. They even changed its name back to The Red Lion Inn in honor of its history. The Red Lion Inn has remained a crown jewel to Massachusetts since its beginnings, and while most guests come and go, some have evidently stayed after their death as well.

Phantoms of The Red Lion Inn

Surprisingly, our journey into the hauntings at The Red Lion start on the popular review site Trip Advisor. More than one review was left about room 301 and the unusual activity that occurred there during a couple of guest’s visits. One review stated that the bedsheet was tugged during the dark hours of the night, and another reported the feeling of their toes being pulled on as they lay in bed. The sound of footsteps and someone sitting on the bed are also reported.

A third review told of disturbances during the night in the form of strange apparitions and covers being tugged from the bed. The apparition usually seen in room 301 is of a tall man in a top hat and period attire. He is said to vanish into a white mist before he dissipates away.

Perhaps the best way to experience the hauntings of the Red Lion Inn is to stay a night yourself!

Room 301 isn’t the only nook of the Red Lion Inn that houses resident ghouls. One strange story in the inn’s visitor booklet reports an incident during a guest named Sheryl’s stay. Her report says that in April of 2003, she was awoken by someone standing over the bed. She glanced at the clock, 1:35 a.m. Sheryl ended up falling back asleep after the encounter with the entity, and in the morning, she noticed that their daughter had left them a message stating that a thunderstorm had knocked out the powerline to their house, causing a dangerous shower of sparks. The time of her call? You guessed it — 1:35 a.m.

Other miscellaneous encounters include cold spots throughout the inn, knocks on the walls, disembodied voices, and unseen giggles.

Strangely enough, there are other Red Lions all across the globe that have reports of unexplained happenings. The 17th century Red Lion Inn of Wiltshire is believed to be haunted by a former innkeeper, while the Red Lion in Gloucestershire features the spirit of a woman named Anne. Red Lion Square in London is where the apparition of Oliver Cromwell is reported, and the Red Lion Hotel in Yorkshire houses a phantom man. What is it about the name ‘Red Lion’ that attracts visitors from the spiritual realm?

These days, the Inn is running business-as-usual, welcoming guests from all over through its doors and providing visitors with a cozy stay. The inn provides a truly restful stay, even with the ghosts — if you don’t mind a little bump in the night, that is.

Even with all of the reports of ghostly activity, people flock to the Red Lion Inn, in search of a quiet respite and a chance at an encounter with an otherworldly guest (or two!) Would you ever check in to a night at this historic inn? Have you ever visited, and did you experience anything out of the ordinary during your stay?

For more reading on America’s haunted inns, check out our article about Concord’s Colonial Inn!