The Lively Ghosts of Red’s Place 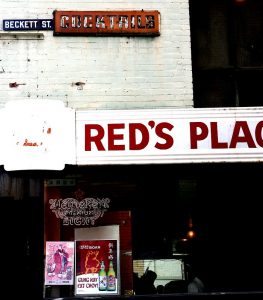 Red’s Place is a local sports bar with a friendly vibe. Often called the “Cheers of Chinatown,” this historic pub has a long and enduring relationship with the surrounding community. Being right in the path of the annual Chinese New Year parade, the bar’s staff and patron often participated in the main festivities, a tradition that continues to this day. It’s one of the oldest bars in Chinatown, first opening its doors in 1960. But its heritage is much older, occupying space that was home to several family-owned businesses throughout the 1800s. The space was home to a barbershop, saloon, and cigar shop. Throughout its history, the space was known for its ties to underground gambling dens. The basement at Red’s Place isn’t open to patrons, but it still houses some remnants of its seedy past, including old teller booths. With such a long history, it’s not unusual that Red’s Place is said to be haunted by the locals. They say the spirits of the gamblers are still alive and well. The sounds of people hooting and hollering, as well as tables and chairs being smashed, are occasionally heard echoing from the basement. Some have even seen old-timey gamblers walking through the basement door without it opening. The ghost of a man smoking a cigar is often seen behind the counter, presumably a remnant of the old cigar shop.

Before the Cheers of Chinatown

Red’s Place first opened over 60 years ago, but the history of the building is much older. Locals say the first business on 672 Jackson Street was actually a barbershop, which occupied the space in the late-1800s. Next came a cigar store, which was open until at least 1927, according to historic photos of the building. Sometime over the next few years, a saloon opened up in the building. This was the beginning of its seedy history as a hangout for gamblers. While it’s unknown for sure whether or not the gaming continued when the bar became Red’s Place, the teller boxes, among other telltale artifacts, remain in the basement to this day.

First opening its doors in 1960, Red’s Place occupies a prime space on Jackson Street, which helped attract both tourists and locals alike. It was right on the route of the Chinese New Years parade, giving patrons a chance to be directly involved in the festivities. One year, paradegoers lit hundreds of thousands of firecrackers on Jackson right in front of the bar, kickstarting a tradition that continues to this day.

Red’s Place became a household name in the community. Locals made it their go-to bar, while well-known San Franciscans went out of their way to grab a drink there.  Foodies never pass it up while visiting the city. Mythbusters co-star Tori Belleci and New York restauranteur Eddie Huang have both made appearances at Red’s.

Today, you can find Red’s staffed by friendly servers, all eager to serve you a drink and have a chat. The bar retains its old-school charm, and the exterior looks almost identical to the old cigar shop. The patrons and staff of Red’s maintain their Chinese New Year traditions, lighting firecrackers and joining the parade when it passes by. The bar continues to attract sports fans, and patrons pack into the small space whenever a big game is on.

The Haunts of Red’s Place

Given the building’s century-long history, it’s no wonder that Red’s Place has garnered quite the haunted reputation. There are dozens of ghosts in Red’s, many of which are connected to the building’s seedy past. While most who hang out at the bar just go for a drink and some banter, a few patrons claim to have had a brush with the supernatural.

Red’s Place still maintains ownership of the basement, which is where the gambling once took place. Many of the artifacts from those days still remain. Its common knowledge among supernatural experts that ghosts and spirits often maintain connections to the living world via objects that were important to them while alive. It’s also the case that spaces with a strong sense of history also retain old memories and attract ghosts.

Many patrons claimed to have seen spirits coming in and out of the basement, walking straight through the locked door as if it wasn’t there. Some of the staff even believe they’re customers, until they disappear into thin air. Some come up to the bar to order a drink, only to disappear when the drink arrives.

The ghosts are known to be quite rowdy at times as well. Patrons and staff alike have heard loud noises coming from the basement. Yelling, arguing, and tables and chairs being tossed around the room. You know, the typical sounds of angry gamblers trying to one-up each other. It’s as if the poker games never stopped. For the ghosts of Red’s Place, the games are still going.

There’s also another ghost haunting the historic bar. A man with a thick mustache and tophat has also been spotted hanging out behind the bar. He’s usually seen smoking a cigar, leading many to believe that he was the owner of the old cigar shop. He’s quite friendly, but he still spooks the patrons and staff of Red’s. He usually appears for a split second before vanishing, having left many people startled and in shock.

San Francisco is one of America’s oldest major cities, and so, one can expect no shortage of haunts! The infamous Alcatraz is teeming with all sorts of spirits, with ghosts rumored to be behind cell doors opening and closing on their own. According to museum staff, the infamous prison was haunted even when it was in operation. There are stories of prisoners hearing moans, chains rattling, and whispers. The beautiful Whittier Mansion is a remnant of the city’s early days. Once home to a wealthy family, the sprawling building is now purportedly home to several ghosts. But seeing as the mansion is still a private residence, it’s not wise to just knock on the door looking for ghosts. The Nob Hill Inn was once a townhome in a luxurious neighborhood. Today, the inn is known for a practical joke-loving ghost. Though the spirits tend to stay on the socially acceptable side, tenants and guests have all fallen victim to their pranks. Want more haunted San Fran? Check out the top ten most haunted spots in the Bay!