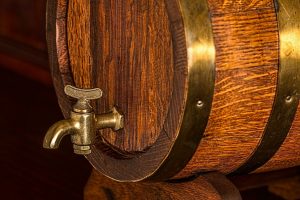 The Barbarossa Lounge is a unique bar where patrons can indulge themselves in a relaxed setting inspired by the golden days of the Barbary Coast. The bar features classic drinks from the Mediterranean, like Grog, a favorite among pirates and sailors during the 17th century. But that’s not all you’ll find at the Barbarossa Lounge. The building is one of the oldest in San Francisco’s financial district, and rumors say that it just might be haunted…

San Francisco is one of the oldest cities on the Pacific Coast, with the first Spanish settlers landing here in 1776. But the city didn’t grow until the California Gold Rush in the 1840s and 50s, when the population exploded in just a few short years. Since then, San Francisco has become one of America’s most unique cities. Chinese immigration, the Summer of Love, the tech boom, and a thriving LGBTQ community have made the city what it is today. But the Bay Area has some dark secrets… it’s absolutely haunted!

Since 1863, Alcatraz Island was used to house military prisoners and POWs from the Civil War. The strong, cold current made the island uncomfortably frigid and difficult to escape from. Starting in 1933, the island became a federal penitentiary, housing high-profile criminals like Al Capone and Machine Gun Kelly. The island is filled with haunted folklore, with the ghosts of prisoners said to still reside within the prison’s brick walls. Staff and visitors alike have reported moaning noises, the sounds of chains rattling, and strange shadow figures moving through the building. According to historians, reports of ghosts date back to when Alcatraz was still a functional prison.

There are several other famous haunted locations in San Francisco. The ghosts of hippies, gold prospectors, and victims of the 1906 Earthquake are said to roam the city streets at night. What awaits you in the City by the Bay? Only one way to find out!

The Barbarossa Lounge is a trendy bar that blends Mediterranean influence with San Francisco’s luxury atmosphere. Located on Montgomery Street, or the “Wall Street of the West,” the lounge is right in the heart of the city’s financial district.

The Barbarossa Lounge is inspired by the culture of Barbary Coast, or North Africa under Ottoman rule. Many of the drinks are named after famous musicians, dancers, and criminals of the era. The bar also serves beer on tap, scotch, and wine by the bottle.

The signature drink of the Barbarossa Lounge is Grog, a classic Mediterranean drink popular with sailors and pirates during the Age of Discovery. Grog is a mix of spirits, citrus, and water. While it sounds tasty, it actually had a practical use. The citrus kept sailors from contracting scurvy, and kept the water from going rancid at sea. Patrons can have their Grog with whatever spirit they choose, though it goes best with whiskey or bourbon.

Is the Barbarossa Lounge Haunted?

The Barbarossa Lounge is located at 714 Montgomery Street, one of the oldest buildings in the area. The building was one of the few survivors of the 1906 San Francisco Earthquake. During the 19th century, it was used as a jailhouse, keeping some of the city’s most notorious criminals within its walls.

With all that fascinating history around the building, one has to ask; is the Barbarossa Lounge haunted? While there aren’t any bonafide ghost stories, the building’s long history means that it just might play host to some interesting spirits. Who knows? Maybe you might catch the ghosts of some old criminals sitting at the bar, drinking a glass of Grog as they plan their next crime.

Being in the heart of San Francisco, the Barbarossa Lounge is a short walk away from some of San Francisco’s notorious haunted hotspots. After grabbing a drink at the Berber-themed bar, why not go for a walk and spot some spirits?

Red’s Place is one of the oldest bars in Chinatown. Established in the 1960s, the bar quickly became a neighborhood hangout. Being right in the path of the original Chinese New Year parade, the staff and patrons often took part. One year, parade-goers set off hundreds of thousands of fireworks in front of Red’s, solidifying the it’s spot as an unofficial part of San Francisco’s Chinese New Year parade. The tradition continues today, though the bar’s busiest nights are during the biggest sports games of the year.

Red’s Place is also quite haunted. The space predates the bar by nearly a century. The building also hosted several other businesses, notably a barbershop, saloon, and an illegal gambling club. Both patrons and staff report seeing several ghosts presumably connected to the building’s past. The spirits of old gamblers have been seen walking straight through the locked door leading to the basement. Some have heard loud noises emanating from the basement as well. The spirit of the cigar shop owner has also been spotted hanging out behind the bar.

The San Francisco Art Institute is one of the city’s premier artistic institutions. Founded in 1871, the SFAI was a place for art and culture to thrive in the Bay Area. Unfortunately, the campus was destroyed in the 1906 Earthquake, but the Institue was saved by its insurance policy. The SFAI went on to give birth to some of the world’s most renowned artists, photographers, and photojournalists.

Many claim to have come face-to-face with some terrifying haunts in the Art Institute. According to some, the campus is built upon the graves of those who died during the California Gold Rush. The construction of the SFAI was marred with all sorts of paranormal phenomena, such as tools being moved or outright disappearing. Students also claim to have heard screaming, moaning, and phantom footsteps in the halls at night. The school’s tower is also said to be haunted.

Lombard Street cuts through the city of San Francisco from East to West, but the most famous section is the instantly recognizable block between Hyde and Leavenworth, featuring eight hairpin turns down a narrow stretch of steep road. It’s one of San Francisco’s most visited attractions, with millions of visitors yearly. But this block of Lombard Street also hides a dark secret…

At the bottom of the windy road lies 1000 Lombard Street, a verifiably haunted abode. In the 1960s, the house was home to Pat Montandon, a socialite known for her wild parties. After a particularly wild night, a tarot card reader placed a hex on the home. Shortly afterward, a deadly blaze took the life of one of Montandon’s close friends, who was staying in the house at the time. Two of Montandon’s close friends then committed suicide shortly afterward.

Today, it’s generally accepted that the house at 1000 Lombard still holds the curse left by the tarot card reader. Although, the house doesn’t get much attention, considering the crooked streets of Lombard steal most of the attention.