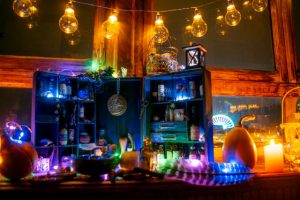 The Bamboo Hut is a low-key Polynesian-inspired bar among the many hotspots on Broadway. The chill pub hosts DJs, bamboo and tiki mask decor, and colorful drinks inspired by the Pacific Islands. The bar sits on the border of Embarcadero and Telegraph Hill, just a few miles away from several haunted hotspots.

Today, the area known as San Francisco was once inhabited by the Yelamu tribe, who were part of the greater Ohlone peoples. They lived spread across the Bay Area, with their territory stretching from the Bay all the way down to Big Sur.

The first Europeans were a Spanish mission that arrived in 1769 and claimed the area for Spain. The Spaniards built a fort in 1776, called the Presidio of San Francisco. Today, the fort is part of the Golden Gate Recreational Area. While the fort never saw any actual battles, it served as a launching point for the Spaniards, Mexicans, and Americans in various military campaigns.

After the Mexican Revolution in 1821, San Francisco landed in Mexican territory. The settlement began to expand beyond the military installation and was named Yerba Buena, after the herb that grew abundantly in the region. American settlers congregated in the area, increasing American influence. During the Mexican-American War in 1846, the city fell into US hands.

The city exploded during the California Gold Rush. Settlers poured in from all over the country, and beyond. San Francisco’s population skyrocketed from 1,000 to over 25,000 in just a few short years. Companies like Levi Strauss, Ghiradelli Chocolate, and Wells Fargo sprouted up to cash in on the economic boom. The Gold Rush laid the foundation for the modern-day Bay Area.

During this time, Asian immigrants became a major cultural influence. San Francisco’s Chinatown became the country’s largest, and remains so to the present day. Chinese immigration faced heavy backlash, being discriminated against at both the social and legislative levels. Where race riots attempted to scare the Chinese communities out of the city, the Chinese Exclusion Act put a clamp on Asian immigration altogether.

The San Francisco we know today is an eclectic mix of a wide range of cultural influences, from the 1960s Summer of Love, to Asian immigration, to today’s tech boom. The city is also a worldwide hub for LGBTQ culture. But the city is also surprisingly haunted, and the ghosts of San Francisco’s past still haunt the streets to this very day.

The Bamboo Hut is a lively bar on the border of Embarcadero and Telegraph Hill. Locals and tourists alike are attracted inside by the alluring lights, soothing music, and Polynesian decor. Some say the Bamboo Hut is lowkey, while others describe it as a sort of nightclub.

The Bamboo Hut describes itself as a neighborhood tiki bar loaded with history. The walls are lined with bamboo, carved tiki masks, various sea creatures, and a canoe hanging from the ceiling. At the entrance to the bar is a massive waterfall feature topped with a huge tiki head. The owners of the bar claim the tiki head dates back to the 1940s.

The Bamboo Hut first opened in 1997 as part of another bar, the HiBall Lounge. It became its own establishment two years later, setting the stage for its vibrant future. Today, you can enjoy classics like the Mai Tai or a Flaming Volcano Bowl under the colorful lighting while enjoying smooth Polynesian Pop music.

While the Bamboo Hut isn’t haunted, some of San Francisco’s most haunted hotspots lie nearby. Below are a few that are within walking distance from this neighborhood pub.

Established in 1871, the SFAI was built to foster San Francisco’s budding art scene. After surviving the 1906 Earthquake, the SFAI played a role in the inception of several new art movements of the 20th century, including Funk Art. Numerous successful artists and photographers studied at the Institute, and it also played a role in kickstarting the city’s punk scene.

The SFAI is rumored to have been built on the burial ground of those who perished in the California Gold Rush. Their spirits are still said to haunt the school grounds. The campus tower is also a hotspot for all sorts of ghouls. Many students report strange entities upon visiting the tower.

Red’s Place is said to be the oldest bar in Chinatown. The bar first opened up shop in the 1960s, when it began its long tradition of taking part in the Chinese New Year parade. Over the years, Red’s Place became a neighborhood staple, attracting both tourists and longtime locals. Today, you’ll find friendly staff waiting to serve you a beer, and crowds of sports fans packed into the bar during the big games.

But Red’s Place hides a dark secret. The building’s history stretches all the way back to the late 1800s. The building’s seen gamblers, a barbershop, and a cigar shop. The ghosts of the gamblers still haunt the building and are known to cause a ruckus in the basement.

The Whittier Mansion is a remnant of the early days of San Francisco when the elite used to build their mansions high up in the hills. Completed in 1896, the mansion has survived numerous earthquakes, including the big one in 1906. The mansion served as a homebase for the German consulate, and later, the American government. Today, the home is a private residence and is known for being potentially haunted.

The ghosts of Whittier Mansion stem from the many owners the building had throughout the years. The ghost of a butler is known to haunt the mansion. He’s said to be short and bald, and roams the halls late at night. The spirits of Bill and William Whittier also haunt the mansion.

Faxon D. Atherton became one of the wealthiest traders on the Pacific Coast, often traveling all the way down to Chile to buy and sell wares. He bought a huge parcel of land in Valparaiso Park upon which he built his mansion. Atherton had a son, George, who took ownership of the house when he got older. Eventually, Atherton died, and George took a dangerous sailing trip that cost him his life.