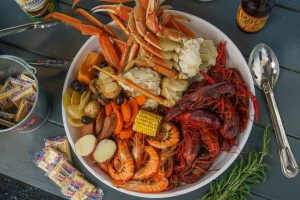 Salem has a long history with tragedy to spare. The Salem Witch Trails left their negative energetic imprint upon the area after 25 people were accused of witchcraft, tried, and killed in 1692. (19 of them were hanged, one crushed to death, and five died while in jail) The horrors of the Witch Trials can be felt along Salem’s city streets to this day, the quintessential east coast town left in a state of grieving for those lives lost.

The building that is now home to Turner’s Seafood is actually built atop the land that was once Bridget Bishop’s apple orchard. She was one of the accused and was the first person executed in the summer of 1692. Bridget was a larger-than-life character, making her an easy target for accusations of witchcraft.

In 1831, Lyceum Hall was built on Bridget’s land and hosted a number of historical figures such as Frederick Douglass and Alexander Graham Bell. The Great Salem Fire destroyed much of the town in 1914, including Lyceum Hall. It was replaced by the brick building that exists today.

Much of Essex Street itself is infamously haunted, which isn’t surprising considering the history that envelops the city. Turner’s Seafood is also known to be a ghostly hotspot, with reports of unexplained activity coming from guests as well as staff.

The most-reported phenomenon is that of an apparition of a woman dressed in a long white dress. She’s been reported since 1989, and is known as the “Lady in White,” but Salem’s residents have a feeling she’s the spirit of Bridget, keeping a close eye over her land. Visitors to the restaurant report seeing Bridget at the top of the staircase, and others have said they catch glimpses of her in the mirrors around the restaurant.

Strangely enough, an overwhelming scent of apples is reported throughout the restaurant, on the sidewalks, and even in the alleys behind the buildings surrounding Essex Street… all of this occurring where Bridget’s apple orchard once stood.

Bridget’s spirit has even attracted the attention of popular ghost hunting groups and television shows, as well as smaller investigative groups and ghost enthusiasts.

Even though her end was tragic, Bridget does not seem to hold any contempt for the citizens of Salem or the visitors who come to learn of its past. According to recent reports, she seems to enjoy playing games with visitors, even stealing silverware to the point where the staff will have to bring a new spoon to guests five times in a single meal.

Salem has grown since its dark past of hysteria and wrongful death. Places like Turner’s Seafood do not profit off of the names of the lives lost, but instead, aim to provide an amazing guest experience and the best cuisine on the east coast. Regardless of its bright and appealing appearance, Turner’s Seafood seems to always top the lists of most haunted restaurants in the area, and tourists and residents alike flock to Turner’s in hopes of seeing Bridget herself.