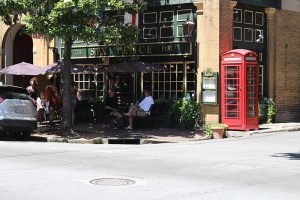 Savannah is regarded as one of America’s most haunted cities. As the oldest city in Georgia, it’s no surprise that the spirits of the state’s southern past call Savannah home. The entirety of Savannah is brimming with historic charm, from its cobblestone streets to the Spanish moss hanging over hundred-year-old oaks. Ghost hunters and foodies alike flock to Savannah for its ghostly past, and spirited cuisine (no pun intended)

A Tidbit of Pub History

Nestled within Savannah’s Historic District is Six Pence Pub. In Savannah, ‘Wally’s Sixpence’ was the place to greet new friends and old, to shoot the breeze and take a load off. Wally and Doris were the original owners of the pub, and even though they were from London, Georgia’s southern charm rubbed off on them. They were well-known for being some of the most friendly folks in the city, making the locals feel at home in their pub. Wally was a talker and loved to chat with the patrons while Doris made the pub’s food at home in her own kitchen. Six Pence Pub is known for its unique vibe and traditional British cuisine, but the pub is also known for its resident spirits.

Employees are the main targets of the ghosts in Six Pence Pub, with most reports coming from staff of the establishment. Reports of randomly nursing lightbulbs, sudden drops in temperatures, and pans being thrown off of the counters in the kitchen. Some staff have suggested that the spirits are past patrons demanding another round of drinks, while others say that it has to be the pub’s original owner, Wally, keeping watch over his life’s work.

The claim that the ghosts are past patrons seems to hold true, because sometimes glasses will fall from the bar and beer taps will turn on and off by an unseen hand. Maybe the spirits are tired of waiting for service and are trying to pour their own drink!

While it’s hard to pinpoint why the bar is so active, it could be because the Six Pence Pub is just eighty yards from a mass grave at Madison Square. During the Revolutionary War, two major battles were fought in Savannah. Both were equally bloody, and the area around what would become Madison Square saw heavy casualties. It’s even rumored that the area was the burial site for the dead soldiers, except some of those soldiers weren’t dead. The wounded and sick were thrown into the pits and buried while still alive.

The most daunting experiences in Madison Square are the shadow people. Many simply see them out of the corner of their eye, and they can easily be mistaken for a bird, raccoon, or other creature that might be roaming around late at night. But it soon becomes apparent that these entities follow their victims around the square. There’s one in particular that can get uncomfortably close, though it usually vanishes once approached. Like the rest of the shadow people, he’s all black and has no distinguishable features.

Regardless of their origin, the spirits at Six Pence Pub are active as ever and waiting for you to visit!