Queen Elizabeth II : A Darker History of her Palaces and Castles 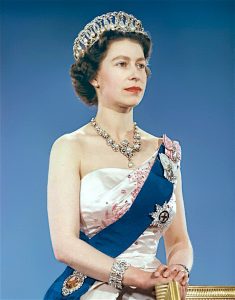 The world was recently shocked by the news of Queen Elizabeth II’s death. She was the Queen of the United Kingdom and other commonwealth realms from February 1952 until her recent death on September 8th, 2022. Her 70 years and 214 days reign is the longest of any British monarch and the longest recorded of any female head of state in history.

Elizabeth resided at the world-famous Buckingham Palace during her life and reign, and with centuries of history behind its walls, it’s no surprise that Queen Elizabeth shared her palace with some ghostly residents. Let’s dive into Queen Elizabeth II’s history as well as the history of Buckingham Palace and some of Elizabeth’s other properties, to figure out just who could be residing in them after their death.

History of the Queen

Elizabeth II was born on the 21st of April in 1926 in Mayfair, London as the first child of the Duke and Duchess of York. Her father acceded to the throne in 1936 upon the abdication of his brother, King Edward VIII, making Elizabeth the heir to the throne.

She was educated privately at home and began to undertake public duties during the Second World War, serving in the Auxiliary Territorial Service.

In November of 1947, she married Philip Mountbatten, a former prince of Greece and Denmark — their marriage lasted 73 years until his death in April of 2021. The two had four children together, Charles, Anne, Andrew, and Edward.

After her father’s death in 1952, Elizabeth was just 25 years old when she became the Queen of seven independent countries including the United Kingdom, Canada, Australia, New Zealand, South Africa, Pakistan, and Sri Lanka.

She remained a constitutional monarch throughout many political and world changes including the decolonization of South Africa and even the withdrawal from the European Union.

Queen Elizabeth II faced occasional sentiment and media criticism throughout her reign, especially after the death of her daughter-in-law, Diana, Princess of Wales in 1997.

Elizabeth’s history is so extensive, that we can’t fit all of it in this article. Her accomplishments, her story, her criticisms, and questions left unanswered after her death. To dive deeper into Elizabeth’s life, check out this page here. For those of you who are itching to learn about Buckingham Palace and the reports of hauntings that occur there to this day, read on. 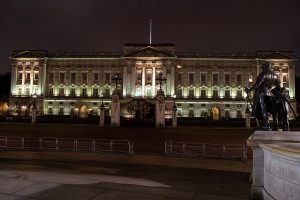 Throughout her life, Elizabeth’s family has acquired more than a few palaces and properties — some of them are said to be ridiculously haunted, with centuries of history behind their walls.

Queen Elizabeth II’s London residence, Buckingham Palace, has belonged to the royal family since 1703. Centuries of history spill from its brick and mortar walls, but some of its ghosts date back to before that time, including a monk that is said to haunt the rear terrace, where a monastery once stood.

King Edward VII’s private secretary, Major John Gwynne is also said to have stayed in the royal residence, he also died there after committing suicide after a divorce with his wife.

Windsor Castle has made headlines for years, but especially recently for hosting royal weddings — where some spectators were not on the list. The royal residence is said to be haunted by many ghosts, including King Henry VIII, George III, and even a young guard who shot himself on the Long Walk.

The ghost of Queen Elizabeth’s mother is also believed to roam the library in her heels, as visitors report hearing the click and clack of high heels when no one is in the room.

One of the more popular ghost stories out of Balmoral Castle in Scotland is of John Brown. He was the servant and friend of Queen Victoria, some stories even claim that the two fell in love, but just couldn’t be together due to circumstances. He’s said to roam the castle grounds wearing a kilt.

Hampton Court Palace in London is said to be one of the most haunted, with at least two of Henry VIII’s wives haunting the property. Jane Seymour, his third wife, died at the palace just days after delivering their son. It’s said that a very pale figure is seen on the stairs at the palace, which leads to the room where Jane died.

Henry’s fifth wife, Catherine, was beheaded for adultery in 1542 when she was just 19. Her ghost is said to repeat that very moment that she was arrested and ran down the hall, screaming for the King’s mercy.

This palace has been in the family since the 17th century, so of course, it has its fair share of strange happenings. One of these phantoms is said to be King George II — at the time of his death, he was waiting for news from his troops during the Seven Years’ War. He is said to have died staring out the window saying, ‘Why don’t they come?’ The story says that he is still asking to this day, a phantom seen in the windows.

Before Prince Harry and Meghan Markle settled down in California, they moved to the U.K. countryside into Frogmore Cottage. The cottage is not far from the bodies of Queen Victoria and Prince Albert, who are said to visit the gardens of the cottage every now and again.

A few more of the royal family’s properties are believed to be haunted, including the Tower of London, where many gruesome royal deaths occurred, the Palace of Holyroodhouse, where a murder and explosion occurred, Sandringham House, where poltergeists cause mayhem, Amner Hall, where a Catholic man who was killed at the Tower of London is said to wander, and St. James’s Palace, where an apparition with a slit throat appears to visitors.

The death of Elizabeth has truly shocked the nations of the world, her reign changing the face of the planet itself. Queen Elizabeth II was beloved by countless people worldwide, especially at home in the United Kingdom. The news of her death has saddened many but leaves hope for what’s to come when her son proudly takes over the throne.