Most Haunted Bars in Savannah 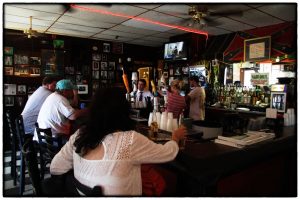 Savannah, Georgia is a southern gem of a city with a past that goes all the way back to 1733. That’s the year General James Oglethorpe and 120 passengers of the ship named “Anne” arrived on the banks of the Savannah River. Oglethorpe named the 13th and final American colony Georgia, after King George II. Savannah was its first city.

Savannah is known as America’s first planned city. Oglethorpe laid out the city in a series of grids that allowed for open streets and shady parks. Savannah originally had 24 squares, 22 of which are still around today. With a history so extensive, it’s no wonder that even the bars of Savannah are haunted. Read on to find out the top 4 most haunted bars in Savannah, and see which one came out as number one!

Savannah is not only known for its history, but for always staying true to its roots. One bar, Pinkie Masters, is as woven into the fabric of Savannah as any other spot in its historic district. With southern hospitality and drinks like no other, it’s no wonder that Pinkie Masters was frequented by some pretty well-known names like Jimmy Carter and Al Gore.

Employees are the main targets of the ghosts in Six Pence Pub, with most reports coming from staff of the establishment. Reports of randomly nursing lightbulbs, sudden drops in temperatures, and pans being thrown off of the counters in the kitchen. Some staff have suggested that the spirits are past patrons demanding another round of drinks, while others say that it has to be the pub’s original owner, Wally, keeping watch over his life’s work.

The Savannah Taphouse is located in what once was the old Avon Theatre. The theatre saw many shows and many souls during its 30-year life. A firsthand account of the paranormal at the taphouse really makes one ponder… do the spirits of the past remain in the present here?

The 17Hundred90 Inn was originally three separate residences that burned down in 1820. It was rebuilt as a single building just a year later and has been hosting visitors since. The inn is nestled in a quaint residential area of the city and is the quintessential old-world southern inn. Visitors to the inn will enjoy period-decor, delicious food, and even three reported resident spirits!

There you have it, from a bar with ghosts that harass the staff, to one of the most haunted inns in Savannah, 17Hundred90. These locations have been part of Savannah’s history for decades, leaving their imprint on the city’s cobblestone streets. Join us on a Spirits of Savannah Haunted Pub Crawl and see for yourself why these locations made our ‘Most Haunted’ list!