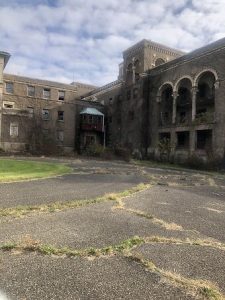 When thinking of abandoned hospitals, asylums, or sanatoriums, chills immediately run down your spine. Something about somewhere so full of illness, lying in ruin, strikes a chord in the human psyche. One starts to wonder, what happened here? Who walked in but never walked out? What did they feel, who did they leave behind?

The Molly Stark Sanatorium is a former tuberculosis hospital in Stark County, Ohio. It was named after the wife of General John Stark and was constructed under the belief that fresh air and sunlight were an integral part of recovering from tuberculosis. Stark Couty began its plans for a TB hospital after it sold its interest in the nearby Springfield Lake Tuberculosis Sanitorium in Summit County. A $750,000 bond was passed by the county’s voters in early 1927 for the construction of the hospital.

Plans for the 150-bed sanatorium were approved, and architect Albert Thayer of New Castle, Pennsylvania was hired to design the state-of-the-art facility. He had plans for a Spanish-Revival style building, with large windows, balconies, and rooftop verandas. The campus also included a children’s hospital, superintendent’s residence, and a power plant. Molly Stark Sanatorium opened its doors on August 23rd, 1929 as one of 25 tuberculosis hospitals in the state of Ohio.

Soon, more space was needed at Molly Stark. In 1948, county voters passed a $500,000 bond issue towards the expansion of the sanatorium. Another $250,000 was received in state and federal funding as well. That $750,000 was dedicated to the hospital in October of 1952. It expanded the east and west wings, increased the hospital’s capacity from 128 to 230 beds, and added a larger kitchen and laundry facility. The campus is even equipped with 1,200 linear feet of tunnels that run underneath the facility, which became a means of travel underground between the buildings

The sanatorium saw great success in its treatment of tuberculosis patients. The number of deaths at the hospital declined from 153 in 1946 to just 43 in 1951. Still, that’s 200 documented deaths in one location.

Decline of the Asylum

By the 1950s, great advances in antibiotics allowed for the treatment of tuberculosis and the need for such an expansive hospital waned. In 1956, the sanatorium changed its name to Molly Stark Hospital and began admitting non-TB patients. The last remaining tuberculosis patients were transferred out of Molly Stark in 1970.

In July of 1975 discussions began about the future of the property, after a wave of staff resignations and growing fiscal issues. The hospital eventually closed its doors in 1995 after extreme aging of the facility and declining patient attendance.

Many plans were put on the table for the shell of the sanatorium — apartments, assisted living facility, even retail space was an option. With a price tag of just over two million dollars to remove asbestos, however, most developers backed out of their deals. In 2003 the county hired a contractor to determine how much it would cost to rehabilitate the facility. They came back with a staggering ten million dollars in repairs. What would happen to Molly Stark?

On October 2nd, the county park board offered one dollar for the hospital and its grounds. Now a county park space, $200,000 was received for cleanup of harmful asbestos and other environmental issues.

We visited the Molly Stark Sanatorium during the day and immediately felt the energies emanating from inside. The building sits like a vulture, as it used to be a haven for the ill but is now just a stark reminder (no pun intended) of the lives that were lost there. We’re planning to go back to Molly Stark and investigate along the inside, so be sure to stay tuned for part two of this blog series as we share with you any photos we capture and experiences we may have inside of the building.