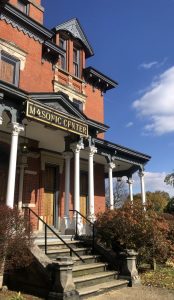 There’s a haunted Masonic temple in Kent, Ohio, and it’s got a darker history than you think.

The Kent Masonic Temple located in the sleepy college town of Kent, Ohio has been the home of the Rockton Lodge #316 since 1923. However, the history of this ornate structure is much deeper than that.

While the Freemasons hold their own mystique, the Kent family home that this lodge is settled in truly sets the stage for strange occurrences and unanswered questions, all wrapped up inside of a truly unique victorian style mansion.

The temple was built by Marvin S. Kent, the first brick being laid on June 7th, 1880. The temple was originally constructed as a home for the Kents, and the majority of the construction was completely in 1884, when the Kent family finally moved into their new homestead.

Marvin Kent’s son, William, would eventually go on to marry a woman named Kittie M. North. The couple would go on to enjoy a fulfilling relationship, but good times didn’t last long.

Kittie met a tragic end in the home. On May 19th, 1886, then 35-year-old Kittie was seriously burned when a kerosene heater being used to warm the third floor ballroom exploded as she tended to the stove. Her burns proved to be fatal, as the next day Kittie took her last breath. After her demise, the third floor was shut completely, never to be used for any social functions and was eventually boarded up.

Shortly after Kittie’s death, William moved into the home with his father full-time, and he remarried in 1901. When William passed away in 1923, he left the fancy home to two nieces. The Kent family eventually decided that they did not want to keep the home in their family, and instead sold it to the Rockton Freemason Lodge #316. The lodge moved into the home on November 1st, 1923.

Since the lodge’s claiming of the Kent home, members and visitors have reported a full-body apparition of a woman in old-fashioned white dresses, appearing in various locations throughout the former mansion. The apparition is believed to be Kittie, and she is said to be the entity responsible for making loud noises in the third floor ballroom area, as well as leaving scratch marks all over the floor and walls.

However, Kittie is not alone in the home. Another apparition has been reported, and is thought to be Nellie Dingley, the first librarian to operate the Kent Free Library that was housed in the home. She died working as a nurse in WWI. Her apparition is seen walking quickly throughout the home wearing an old-fashioned nurse’s uniform.