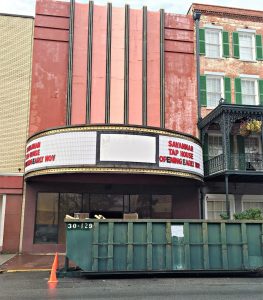 Savannah is regarded as one of the most haunted cities in the United States, which is no surprise, since its also the oldest city in Georgia. Savannah has seen its fair share of tragedy, as it played a part in the Civil War and was the only town left standing in wake of Sherman’s ‘March to the Sea.’ The city even had a Yellow Fever epidemic wipe out nearly 5,000 of its residents. Savannah was given as a Christmas gift to Abraham Lincoln in 1864.

Not only is Savannah high on any list of ‘Most Haunted’ but it’s also one of the best cities for nightlife and foodies! All of the historic (and new) bars in Savannah truly make the city what it is today. Take the Savannah Taphouse, for example. Now considered one of the best new restaurants in downtown, it offers visitors an upscale sports bar experience… but don’t let the modern decor fool you, it’s in a building that used to house the historic Avon Theatre.

The Avon Theatre was built in 1944 and closed its doors in 1970. It is on the National Register of Historic Places. Now home to the Savannah Taphouse Restaurant and Bar, the theatre’s use has changed immensely since its start. While information about the Avon Theatre is scarce, we reached out to see if the spirits of the theatre’s past remained.

While our source asked to remain anonymous, it can be said with much certainty that this account of firsthand ghostly activity is reliable.

“I was in the old Avon Theatre getting some work done, and I had heard footsteps walking back and forth behind me. It’s not unusual for others to be in the building and moving around, so I brushed it off and didn’t even look back. It wasn’t until I heard my name called twice, that I turned around and saw a type of TV static lift into the ceiling and vanish. I could only catch a glimpse of it before it was gone. I never went back to do any other work there again.”

A strange account, but it’s not surprising to hear that a spirit may remain in the theatre building where the Savannah Taphouse is located. People of all kinds gathered in theaters and cinemas and enjoyed themselves there. For some, that was their happy place. It’s no wonder they want to continue on in the places that made them happy in life, even after death.