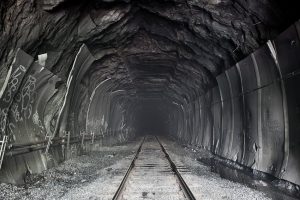 In the gorgeously rugged Berkshire Hills of western Massachusetts, where mist settles on peaks and legends have prevailed since the early days of the state. Deep within these woods lies the Hoosac Tunnel. Stories of vanished friends, strange sounds, apparitions, and grown men – sound of mind – filled with unrelenting fear.

The Hoosac Tunnel is an active railroad tunnel in western Massachusetts that passes through the massive Hoosac mountain range, an extension of Vermont’s Green Mountains. It runs in a straight line along the Deerfield River. The digging of this tunnel is a story of blood, sweat, tears, and tragedy. Work on the tunnel began in 1851, with an estimated cost of over $2 million. Construction ended way over budget in 1875, having used $21 million. At its completion, the tunnel was the world’s second-longest. Over the 24 years it took to complete, hundreds of miners using just picks and shovels chipped away at the stronghold that is the Hoosac Mountain. Two hundred of those miners had lost their lives in what would become known as ‘the bloody pit.’

Most casualties happened due to explosions, fires, and even drownings in the shafts. While most can be chalked up to tragedy, a couple of deaths may not have been accidental.

In 1865, the explosive nitroglycerin was introduced to industrial America, perfect for blasting through the tough rock of the mountain. On the afternoon of March 20th, 1865, Ned Brinkman, Billy Nash, and Ringo Kelley planted a charge of nitroglycerin and ran toward a safety bunker. Brinkman and Nash never made it out, Kelley had prematurely set off the explosion, burying his coworkers alive under tons and tons of solid rock.

Soon after the tragedy, Kelley was nowhere to be found. He was not seen again until a year and 10 days later when his body was discovered inside the tunnel at the exact spot that Brinkman and Nash had died — Kelley had been strangled to death.

Deputy Sheriff Charles F. Gibson estimated the time of death at between midnight and 3:30 A.M., but with no suspects, the murder was never solved. Some of the miners came to their own conclusion. They thought that Kelley had been murdered by the vengeful spirits of Brinkman and Nash. Fearing the tunnel had been cursed by their restless ghosts, the miners avoided entering it. Even visitors to the tunnel become uneasy.

Paul Travers was a mechanical engineer employed with the Hoosac project and had once taken a tour with one of the tunnel’s managers, Mr. Dunn. Paul was a highly respected cavalry officer in the Union Army, and wrote letters to his sister back home in Connecticut often. One of these letters detailed what he had heard in the tunnel.

“… the men constantly complain of hearing a man’s voice cry out in agony and refuse to enter the great shaft after nightfall.”

The mine’s manager assured them time and time again that the sounds were nothing more than wind sweeping through the tunnels, but the miners weren’t so trusting. Paul continued in his letter:

“Last night Mr. Dunn and I entered the great tunnel at exactly 9:00 P.M. We traveled about two miles into the shaft and then stopped to listen. As we stood there in the cold silence, we both heard what truly sounded like a man groaning out in pain. As you know, I have heard this same sound many times during the war. Yet, when we turned up the wicks on our lamps, there were no other human beings in the shaft except Mr. Dunn and myself. I’ll admit I haven’t been this frightened since Shiloh. Mr. Dunn agreed that it wasn’t the wind we heard. Perhaps Nash or Brinkman I wonder?”

A month after Paul’s visit, on October 17th, 1868, the worst disaster in the tunnel’s history happened. Thirteen miners perished in a gas explosion that blew apart a surface pumping station. Debris filled the shaft where the miners were working. Glenn Drohan, a correspondent for the North Adams Transcript, reported that a miner named Mallory was lowered down in a bucket and rope to search for survivors. Once he was back at the surface, almost unconscious from the fumes, he gasped and uttered two words. “No hope.”

With the surface pumping station out of order, the 538-foot shaft started to fill quickly with water. Bodies of some of the dead miners surfaced. More than a year later, the remaining bodies were found on a makeshift raft the survivors had built to try to float on the rising water. They ended up suffocating from the lack of oxygen as fires raged.

During the time that the miners were missing, villagers started to talk about seeing strange shapes and muffled wails near the water-filled shaft. Workmen claimed to see the lost miners carrying picks and shovels through a shroud of mist and snow at the peaks of the mountains. It was said that the apparitions would appear briefly, then vanish, leaving no footprints. As soon as the raft bound miners were found, they were given a proper burial and the visitations ceased…

But deep inside the tunnel, eerie moans persisted, and workers were terrified.

A drilling operations superintendent visited the tunnel after the tragedy had appeared in a Michigan newspaper. He wrote about his visit:

“On the night of June 25, 1872, James McKinstrey and I entered the great excavation at precisely 11:30 P.M. We had traveled about two full miles into the shaft when we finally halted to rest. Except for the dim smoky light cast by our lamps, the place was as cold and dark as a tomb. “James and I stood there talking for a minute or two and were just about to turn back when suddenly I heard a strange mournful sound. It was just as if someone or something was suffering great pain. The next thing I saw was a dim light coming along the tunnel from a westerly direction. At first, I believed it was probably a workman with a lantern. Yet, as the light grew closer, it took on a strange blue color and appeared to change shape almost into the form of a human being without a head. The light seemed to be floating along about a foot or two above the tunnel floor. In the next instant, it felt as if the temperature had suddenly dropped and a cold, icy chill ran up and down my spine. The headless form came so close that I could have reached out and touched it but I was too terrified to move. “For what seemed like an eternity, McKinstrey and I just stood there gaping at the headless thing like two wooden Indians. The blue light remained motionless for a few seconds as if it were actually looking us over, then floated off toward the east end of the shaft and vanished into thin air.”

To think, this all occurred before the tunnel was even completed. On February 9th, 1875, the first train ventured through the haunted tunnel. Even with completion of the tunnel, frightening tales still circulate, even today. Muffled voices, strange orbs of light and apparitions. It’s suggested that if you do visit the tunnel, to stay out of it. It is an operating train tunnel.