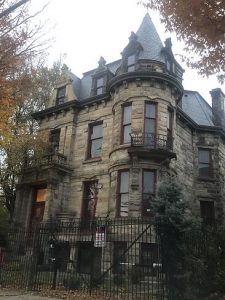 Located just outside of downtown Cleveland, Franklin Castle sits proudly on its original plot, soaking vehemently in its dark and seedy history. The castle’s sky-high turrets, blood red-lined windows, gargoyles and stone facade truly make it stand out from the rest of the neighborhood. It has stood watch over the West 44th Street neighborhood for over 125 years.

The castle was built back in the 1880s by a man named Hannes Tiedemann, a German immigrant grocer-turned-banker. Tiedemann had a troubled history, and he brought that aura to the castle, staining it with rumors, tragedy, and menacing spirits.

The architecture firm Cudell & Richardson erected the castle for Hannes between 1881 and 1883 in the Queen Anne style that was so sought after at that time. What was supposed to be a grand abode for his family, soon turned into their final resting place. Shortly after the Teidemanns moved into the home, family members began to pass away. What was causing all the tragedy in the home?

The Building of The Castle

After founding the Euclid Avenue Savings and Trust, he used his fortune to hire the very prestigious Cudell & Richardson architectural firm to design and build his home. Hannes built the home to provide an upscale residence for his family, but also to provide a temporary home for friends and family that were emigrating from Germany. Franklin Boulevard was one of the most upscale residential streets in Cleveland, second only to Euclid Avenue’s ‘Millionaire’s Row.’

Hannes was plagued by rumors since he first had the castle built. Tiedemann moved into the home with his mother, wife, and their three children. His mom, Wiebeka, died in 1891, followed shortly thereafter by his fifteen-year-old daughter, Emma. Though her cause of death was ruled to be complications from her diabetes, rumors began to surface that Hannes was responsible, as his reputation was that of a coldhearted brute.

The story says that the endless construction of the castle and its elaborate decor were an attempt to distract his wife from the ceaseless barrage of tragedy and death that kept occurring in the home, but even her time wasn’t so far away.

The House Claims Another…

In 1895, Hannes’ wife perished from liver disease. He remarried rather quickly, spurring rumors that he was responsible for her death, and that he murdered her in a rage. He was also accused of hanging his own niece in the house, killing his mistress, murdering his other children, and his illegitimate daughter. A rather long laundry list of murders, for one man.

Following the sale of the house, Hannes himself died of a stroke, and Franklin Castle was sold to the German Socialist Party. The reasons? Rumored secret passageways, where Nazis conducted medical experiments and spy activity.

Franklin Castle has switched hands countless times, and it was even struck by arson once. It was bought and sold quickly by every single individual who moved in, the spirits of the Tiedemann home keeping others out, it seems. One family claimed to have seen a small girl haunting the third floor, a woman in black on the very top floor, and a ghostly apparition wearing white that would stand motionless on the stairwell. Strange noises and unexplained power outages sparked more talk about the castle.

In the 1970s, tiny human bones were found hidden in a corner of the home, thought to be medical specimens used by a doctor who once lived at the castle.

Today, the castle was purchased in 2011 and is privately owned, sealing up the secrets within it for good.