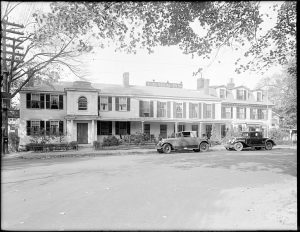 Who doesn’t absolutely love a historic, haunted inn? It seems as if just the word ‘inn’ conjures up imagery of a cozy old building with fireplaces, warm drinks, and history that goes back a century. Concord’s Colonial Inn is just that — a charming Massachusetts inn with a 300-year history! Read on to learn more about the timeline of this historic inn as well as the living and dead guests and residents that call this inn home!

1775 – One of the inn’s original structures was used as storage for provisions and arms during the Revolutionary War.

Early 1800s – Parts of the inn were used as a general store and even a residence.

Mid-1800s – The building was used as a small hotel and boarding house, named the Thoreau House.

1900 – The property was given its current name, Concord’s Colonial Inn.

1960-2015 – The inn operates as usual and undergoes numerous renovations to its wings, guest rooms, suites, and dining room.

With such an extensive history, it’s almost certain that Concord’s Colonial Inn houses some resident spirits that it’s picked up along the way. Before we delve into the hauntings, let’s learn a bit more about the Inn’s history.

The inn was built in Concord, Massachusetts just before the Revolutionary War began and is located just a half of a mile from the North Bridge. This famous bridge is where the ‘shot heard round the world’ took place that started the Revolutionary War all the way back in 1775. Concord itself is home to countless historic events, and with its involvement in the war, it’s no surprise that it’s one of the most haunted towns in Massachusetts.

The area that would once become the town of Concord was originally known as ‘Musketaquid,’ an Algonquian word for ‘grassy plain.’ Concord was established in 1635 by a small group of English settlers. By 1775, the population of the small town had grown to just about 1,400 people.

As tensions rose between colonists in North American and the British monarchy intensified, seven-hundred troops were sent to confiscate militia ordinance stored in Concord in April of 1775. The ensuing conflicts triggered the American Revolutionary War.

Concord is also home to a very rich literary history, with a community of avid authors and readers developing in the mid-19th century. This community was centered around Ralph Waldo Emerson, and included Nathanial Hawthorne, Louisa May Alcott, and Henry David Thoreau.

Concord was even the home to some popular works like Little Women, Walden, and Civil Disobedience. Concord is even the breeding ground of the Concord Grape, developed by Ephraim Wales Bull. Today, Concord is an affluent Boston suburb and tourist destination, a favorite stop for history buffs and ghost junkies alike!

Concord’s Colonial Inn is one of America’s oldest lodgings, and due to the hotel’s role in the Revolutionary War, the inn has been rumored to have a few resident spirits. Many of the soldiers who were wounded in the war were brought to the inn which, like many other hotels, served as a hospital during the war.

The most sought-after guestroom at the inn is room 24. During its tenure as a hospital, part of the inn was owned by Dr. Timothy Minot. When patriot soldiers were injured at the Battle of Lexington and Concord, they were brought to his home for treatment. Dr. Minot used what is now room 24 as his operating room. Guests who stay the night in this infamous suite report very strange activity. One of the first reported unexplained happenings that came from the room was well-documented in a letter from a Mrs. Judith Fellenz to the former innkeeper, Loring Grimes. Mrs. Fellenz told of a grey figure that she saw standing at the side of her bed. She wrote, ‘it was not a distinct person, but a shadowy mass in the form of a figure. It remained still for a moment, and then slowly floated to the foot of the bed in front of the fireplace.’ The innkeeper stated that this could have been the phantom of Dr. Minot making his rounds, checking on patients in their beds.

Other reports from room 24 include flickering lights, the television turning on and off on its own, whispers from the closet, and their room doors slamming shut. Guests who come prepared to capture the unexplained activity have caught orbs and voices on recording devices.

An apparition of a middle-aged woman tucking visitors into bed has also been reported, and many guests as well as staff believe she is a former nurse named Rosemary. Visions of soldiers have also appeared throughout the room as well as throughout the entire inn, only to disappear seconds after they are spotted.

It seems as if the spirits of Concord’s Colonial Inn aren’t just sequestered to room 24… the halls of the inn are just as haunted! Both an older woman and a tall, slim man in a tophat have been seen in the sitting room. A young girl donning a bonnet has also been reported walking about the front desk, greeting guests. Poltergeist activity is also common throughout the inn, with items falling from shelves and personal belongings going missing for weeks at a time.

After reaching out to a visitor who has stayed at the Concord Colonial Inn on multiple occassions, we’ve gathered a list of unexplained phenomena that she reported during her times at the inn.

1 – She was standing in the lobby by the desk getting ready for check-in when she felt someone tugging on her jeans, like a child does. She looked down expecting to see a lost kid, but no one (alive) was there.

2 – During one stay, she witnessed the grey figure floating down the hallway, only to turn into a guest room and disappear, even though the door was closed.

3 – During a trip to see family, she was stunned to see her suitcase had been rifled through. After thinking perhaps someone had entered her room and gone through her things, she let the front desk know and they assured her that she isnt the only one who has experienced it. They told her that one of the resident spirits likes to check bags, but that rest-assured, nothing would ever go missing. She checked, all of her belongings were still there.

4 – She had heard humming in her room late one night only to flip on the lights after seeing a small orb hovering by the door.

These are just some of the experiences reported by this guest, and one can only imagine how many other stories have been taken home with guests. The Concord’s Colonial Inn is just one of many haunted lodgings in the U.S., and definitely one of the most active. If you’re ever coming through historic Massachusetts, be sure to stop by the inn for a night’s rest — the colonial spirits of days gone by are waiting for your arrival!

To learn more about another haunted historic inn, the Red Lion inn, follow this link!