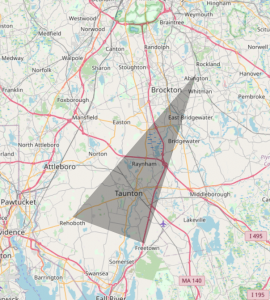 When strange occurrences started to happen exclusively in a 200-square-mile area of southeastern Massachusetts, specific boundaries were defined in the 1970s by cryptozoologist Loren Coleman, and the area was coined “Bridgewater Triangle,” after the infamous Bermuda Triangle of the North Atlantic Ocean. The area is claimed to be a hotspot of unexplained phenomena, ranging from poltergeists, UFOs, orbs, balls of fire in the air, sightings of cryptids, thunderbirds, and even giant snakes.

Landmarks of the Bridgewater Triangle

There are a number of specific locations in the triangle that have been noted for their unexplained activity and phenomenon, with each a bit stranger than the last!

Central to the triangle is a wet, soggy place known as Hockomock Swamp. The name itself lends credit to the claims, as it translates to ‘the place where spirits dwell.’ English colonizers even called it the ‘Devil’s Swamp’ for its strange activity. Orbs of light are reported to flit and float over the swamp during the early morning hours as well as just before the sun sets.

During the seventeenth century, the Hockomock Swamp was used as a fortress by the Wampanoag tribe against the invasion of English settlers. The Euro-American settlers deemed the swamp useless, barren land; but the natives of the region placed a high value on the swamp as it had provided them years of game and had even gained a revered status.

The Wampanoag people used the swamp as a sacred burial ground, and a spirit called the Hobomock was said to live deep within the waters of the area. Hobomock, composed of human souls, was the chief deity of death and disease.

Hobomock is said to still reside in the swamp and could explain the reported orbs and activity that comes out of the swamp throughout the years.

Also within the boundaries of the Bridgewater Triangle is Dighton Rock, noted for its strange petroglyphs, carved designs of ancient and uncertain origin, and controversy about their creators. In 1963, during the construction of a dam, state officials removed the rock from the river in order to preserve it. It was then installed in a nearby park, Dighton Rock State Park.

The rock is 40-tons and contains lines, geometric patterns, as well as drawings of people. In 1690, Rev. Cotton Mather described the rock in his book, The Wonderful Works of God Commemorated:

“Among the other Curiosities of New-England, one is that of a mighty Rock, on a perpendicular side whereof by a River, which at High Tide covers part of it, there are very deeply Engraved, no man alive knows How or When about half a score Lines, near Ten Foot Long, and a foot and half broad, filled with strange Characters: which would suggest as odd Thoughts about them that were here before us, as there are odd Shapes in that Elaborate Monument.”

While the rock itself is not home to any ghostly reports, one does start to question if the unknown inscriptions on the rock tell of the unexplained history of the area.

The Freetown-Fall River State Forest is the site of various cult activities, animal sacrifices, ritualistic murders committed by local Satanists, as well as a number of gang murders and suicides.

In November of 1978, the body of Mary Lou Marnuda, a 15-year-old cheerleader, abducted from Raynham, Massachusetts that September, was discovered tied to a tree in the forest. James M. Kater of Brockton, previously convicted of kidnapping in 1967, was also tied to the murder of Arnuda in 1979. He was never truly punished for his supposed crime, as his guilty verdict was overturned in 1986, and was once again overturned in 1992 when he was retried.

In 1980, while police were investigating another local murder, they were approached by individuals who claimed to have witnessed Satanic activity in the forest.

Three more murders occurred in the forest, including the murder of a transient man mistaken for a police officer, and two men shot to death on Bell Rock Road.

Profile Rock was a 50-foot high granite rock formation located in Freetown, Massachusetts just outside Assonet village, nearby the Freetown State Forest. The site had recently become a tourist attraction, and with that came vandalism and graffiti, as well as the deliberate breaking of the historic formation. State forest officials discourage visitors to stay away from the area.

Profile Rock is the supposed site where Wampanoag historical figure, Anawan, received the lost Wampum belt. Legend says that the ghost of a man can be seen sitting on the rock with his legs crossed, and arms outstretched.

Solitude Stone is an inscribed stone near Forest Street in West Bridgewater, found nearby a missing person’s body. It was later referred to as ‘suicide stone.’ and was found with the inscription: ‘All ye, who in future days, Walk by Nunckatessett stream Love not him who hummed his lay Cheerful to the parting beam, But the beauty that he wooed.’

Several buildings of the historic Bridgewater State University are alleged to be haunted by ghosts and other unexplained phenomena. It was founded by Horace Mann in 1840, making it the oldest permanently-located institution of higher education in the state of Massachusetts.

The school is home to countless reports of shadow people, specifically a man running throughout the halls of campus.

Unidentified Flying Objects: often in the form of balls of light or large, unusual aircraft.

Humanoids: Bigfoot sightings, poltergeist, shadow people, and spirits have been reported at most of the locations on this list.

Cult Activity: Animal mutilations are most reported, particularly in Freetown and Fall River (home of the Lizzie Borden House) where local police were called to investigate mutilated animals believed to be the work of a cult. Two specific incidents in 1998 were reported, one in which a single cow was found butchered in the woods, and another in which a group of claves were discovered in a clearing, mutilated as if part of some strange, ritualistic killing.

Native American Curses: According to legend, Native Americans cursed the area centuries ago because of conflict with Colonial Settlers. A revered object of the Wampanoag people, a belt known as the Wampum Belt, was lost during King Philip’s War. The story goes that the area owes its paranormal unrest to the fact that this belt was lost from the Native people.

Bridgewater Triangle is just one of many areas in the United States with a convergence of unexplained happenings and strange phenomena. Many people believe that curses on the land are to blame, while others think it has something to do with the magnetic poles of the planet. Whatever the reason is, one thing is for certain — Bridgewater Triangle is strange, haunted, and begging to be investigated.