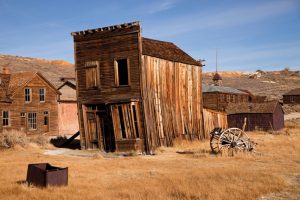 After your visit to Bodie Ghost Town, perhaps you’d like to get up close and personal with the spirits of the more populated cities in California with our San Francisco or San Diego Ghost Tours!

Bodie began as a little mining camp after the discovery of gold in 1859 by a group of prospectors including a W.S. Bodey. Bodey died in a blizzard that following November and never got to see the rise (and fall) of the town that was named after him. The gold discovery at Bodie happened alongside the discovery of silver in nearby Aurora and Comstock Lode. Both of these cities boomed while interest in Bodie remained rather lackluster.

Luck at Bodie changed in 1876 when the Standard Company discovered a large deposit of gold ore which transformed Bodie almost overnight from an isolated mining camp to a true wild west boomtown. Discoveries of precious ores in the Bodie mine during 1878 attracted even more people and by 1879, Bodie had a growing population of almost 10,000 people. It’s even said that in 1880 Bodie was California’s third largest city.

As a truly bustling mining town, Bodie started to develop the amenities of larger cities including a Wells Fargo bank, four volunteer fire companies, a band, a railroad, unions, daily newspapers and of course, a jail. At the peak, 65 saloons existed along Main Street which was a mile long. Shootouts, barroom brawls, holdups, and murders were commonplace. Just like other mining boom towns of the time, Bodie had a clandestine red light district on the north end of town. There’s even a story that tells of Rosa May, a working woman of the night who came to aid the men of the town when a serious epidemic struck the town during its boom. Because of her aid, she was known as the ‘hooker with a heart of gold.’ She is credited with her life-saving care and after she died, it’s said she was buried outside the cemetery fence — regardless of her contributions to the town and its people.

The remainder of Bodie’s cemetery sits on the outskirts of town nearby its mortuary. It is the only building in Bodie that’s built with red brick three bricks thick. Why is that? For insulation during the hot summer days to keep the remains of the town’s dead at a steady temperature.

The first signs of decline happened in 1880 and became apparent toward the end of that same year. Promising mining booms in Montana, Butte, Tombstone and throughout Arizona and Utah lured prospectors away from Bodie. The miners who came to the town in the 1870s moved on to these larger and more promising booms and left Bodie as a family-centered community. In 1882, the residents of the town built the still-standing Bodie Methodist Church, which has withstood the desert and still remains today. Despite the decline in population, mines were flourishing and in 1881, Bodie’s ore production reached a whopping $3.1 million. A railway was even brought to the area in 1881. In 1910, Bodie’s population sit at 698 people, most of which were families who had settled during the boom and decided not to move on to other prosperous ore strikes.

Bodie’s official decline began in 1912 with the printing of the town’s final newspaper, The Bodie Miner. In 1914, mining profits were just below $7,000 and mining claims were being sold off. The last mine closed in 1942 which was due to the War Production Board order L-208, which shut down all non-essential gold mines in the United States during WWII. Mining never resumed in Bodie.

These days, Bodie is preserved in a state of decay. A tattered reminder of the booms that held so much promise for people of the past. Only a small part of the town has survived the elements, but with 110 structures still standing strong, visitors can walk the once-bustling streets. Even the interiors of shops are still stocked with dust-covered goods. Shards of china dishes and bottles litter the sands.

Like other mining camps, Bodie earned a reputation of lawlessness. Killings were daily events and the town soon became known for its violence before its riches. This was said of Bodie at the time:

“Bodie is a sea of sin, lashed by the tempests of lust and passion.”

By WWII only six people were left in the town and five of them died untimely and tragic deaths — a coincidence, perhaps? Or Bodie attempting to shake the living from its land? One of the male residents shot his wife and after she died, three other men killed the husband. According to reports, the spirit of the murdered man was said to visit the three men, shaking his fist and attempting to attack them. All three of the men soon died from various strange diseases.

Could this old ghost town be cursed? Legend says yes. Supposedly, if visitors take souvenirs from the town, even a pebble, they end up suffering from misfortune and tragedy until the item is returned. Park rangers in the area even report people coming back to Bodie to return the stolen item and rid themselves of the ‘Bodie Curse.’

There remains letters in the museum from people who have returned items to the park. The curse is supposedly perpetuated by the spirits of Bodie residents, guarding the treasures that remain.

The J.S. Cain House at the corner of Park and Green streets is one of Bodie’s most haunted locations, said to be frequented by the apparition of a maid. The spirit is said to love children but despises the adults who accompany them. Adults in the home report feeling pushed or suffocated by this unseen entity. Others report the doors opening and closing all on their own.

The Mendocini House is home to several (reportedly) friendly ghouls. One is thought to be Mrs. Mendocini herself, the smell of her italian cooking wafting from the broken windows of the home. Others report hearing children’s laughter and noises of large gatherings.

At the Dechambeau House, visitors report seeing a woman peering from the upstairs window.

Located in the Bodie Cemetery is ‘The Angel of Bodie” which is a three-year-old child who is said to have been killed accidentally when she was hit with a miner’s pick. Her grave is marked with a white marble angel and on occasion the spirit of the little girl is said to come out and play with living children who visit the grave.

The Rest is History

There are no permanent residents at the town these days except park employees. There are no tourist traps, recreations, or restaurants. Bodie is just as it was, an old mining camp, lonely and dusty — with a few spirits in tow. Have you ever visited Bodie? Did you experience any of the reported hauntings there?

For more on America’s haunted ghost towns, visit us at our blog or check out our article about Tennessee’s Elkmont Ghost Town!