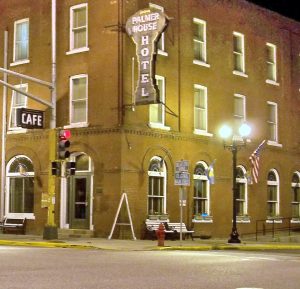 The infamous Palmer House Hotel and Restaurant is located in Sauk Centre Minnesota. It draws in visitors from all across America with its ghostly charm and has hosted everyone from ghost investigators to casual fans of spooky haunts. The hotel has proven itself time and time again as one of the most haunted locations in Minnesota, and those who are familiar with the history of the building aren’t surprised to hear about the hauntings of the Palmer House Hotel.

If you’d like to get up close and personal with the hauntings of America, join us for a historically accurate and hauntingly fun ghost tour!

History of the Palmer House Hotel

The Palmer House Hotel’s official website states that the hotel has been a Sauk Centre destination since 1901. The Old Sauk Centre House, the town’s very first hotel burned down to the ground on June 26th, 1900. With the loss of the town’s then-favorite hotel, Ralph and Christena Palmer built the Palmer House Hotel in 1901. Locals were elated — they gossiped amongst themselves stating that ‘now, at last, the town can have a first-class hotel!’

The Palmers lived there with their children Carlisle and Hazel, Christena’s mother and brother also worked at the hotel — it truly was a family affair.

Modern for the times, the Palmer House Hotel was the first building in Sauk Centre with electricity. Salesmen traveling by train routinely stopped at the hotel and used it for their business meetings alongside much needed relaxation. The hotel soon became the cornerstone of downtown Sauk Centre and was the hottest spot in town for gathering.

The hotel saw a complete makeover in 1993 in order to keep up with the times, but the hotel was kept as close to its original state as possible in order to honor Richard Palmer’s design ideas.

The hotel now boasts nineteen rooms and the creature comforts of modern society have been added, of course. The Palmer House Hotel website says this about their historically beautiful lodging —

‘When you stay at The Palmer House, choose a room tucked away in the recesses of the hotel or a room directly above the Original Main Street where you can look down from your vantage point and observe the hustle and bustle of small town life. Resist the urge to keep to your room and go explore! We have many delightful shops downtown to peruse. The Palmer House’s spacious lobby is perfect for whiling away the hours reading and visiting. You’ll find The Pub, just off the lobby, to be well-stocked with your favorite cocktails and a cozy sometimes spirited place to spend an evening. Trying to resist the inviting aromas coming from the kitchen will be a challenge. Our kitchen is open daily from 7:00 AM to 9:00 PM, and until 10:00 PM Fridays and Saturdays. We have some of the friendliest servers around, an awesome kitchen staff who excel at serving up a savory dining experience, and a baker who will tempt you back for dessert with some of her homemade goodies.’

The history seems tame, so far…

The Haunted History of the Palmer House Hotel

The owner, employees and guests at Sauk Centre’s Palmer House Hotel have been plagued by a strange, debilitating and demonic energy – an energy that owner Kelly Freese believes originates in the hotel basement. This should come as no surprise to those who are familiar with the hotel’s history: The current hotel was built after the old Sauk Centre house burned to the ground, consuming many lives in the blaze. There’s a laundry list of bizarre happenings in the hotel, including the sounds of children playing in the upstairs hallway, dramatic temperature drops, furniture re-arranging itself and items that seem to be thrown by an invisible force.

So, who are the entities causing some of these strange events?

One room in the hotel has been touted as ‘Raymond’s Room.’ Raymond essentially ran a top-floor brothel a century ago. Nowadays, it’s believed his ghost haunts a room on the top floor. On the other side of the hotel, a children’s playroom may be responsible for juvenile haunts. Some say Palmer’s son Carlisle is to blame. It’s a common complaint among guests. They’ll mention how lovely their stay was but that ‘someone let their kids play loudly in the hallway all night.’

A staff member reported having a conversation with a lady that looks like Palmer’s daughter Hazel, before the woman simply disappeared.

One guest of the Palmer House Hotel stated that:

“You know that these walls are trying to talk to you when you sit here, I have seen a dark shadow that paces back and forth across the doorway down in the basement.”

The basement is a place where lights flicker for no reason. Some researchers consider one basement hallway the most haunted part of the hotel. In another room, a snowman decoration has been known to dance for guests even when it’s not plugged in.

Most of the hotel’s rooms have unexplainable events in their records:

Room 11: The air in this room is always cold — so much so that some guests even complain that the air conditioning unit is broken!

Room 17: Guests will leave the room only to come back and see that furniture has been moved.

Room 18: People staying underneath Room 18 complain of loud footsteps above them, only to find out the room is vacant.

As for the darker energies felt in the hotel — the cause remains a mystery.

The Palmer House Hotel is listed on the Register of National Historic Places and recently celebrated its 120th birthday. The staff of the hotel have learned to live with the entities of the building, as they’re not expected to check out anytime soon.

The Palmer House Hotel is open for guests to come and enjoy the historic charm and unique hauntings.

Want to dive into other haunted locations across America? Check out our blog here!