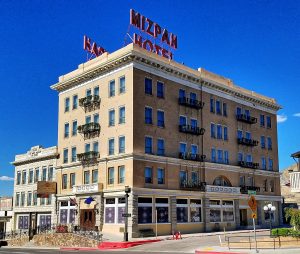 Situated in Tonopah, Nevada, the Mizpah Hotel is a Historic Hotels of America member. The Mizpah and the nearby Belvada Building shared the title of the tallest building in Nevada until 1927. They’re each just five stories tall. The hotel was named after the Mizpah Mine and was the social hub of Mizpah back in its day.

The hotel was a hotspot of celebrities and wealthy investors during the silver boom in Tonopah. It was one of the first luxury hotels in the state. These days, it’s a mix of modern and antique and is considered one of America’s most haunted lodgings.

If you’d like to experience the hauntings of Nevada for yourself, why not join us for a Las Vegas ghost tour?

History of the Mizpah Hotel

While the hotel is one of the area’s oldest structures, it was predated by the Mizpah Saloon, which opened its doors in 1907. The hotel was financed by George Wingfield, Cal Brougher, George Nixon, and Bob Govan, a few of Nevada’s most well-known financiers. The hotel was designed by George Holesworth of Reno. The men who financed the hotel owned other Tonopah businesses and mining companies.

The hotel was given a facade of stone on the sides and rear. The neighboring Brougher-Govan Block served as the first Mizpah Hotel and remains connected. The two buildings are joined with a wooden stairway, and the hotel was even the location of the first elevator in Tonopah.

According to legend, Wyatt Earp kept the Mizpah Saloon, Jack Dempsey was a bouncer, and Howard Hughes married Jean Peters at the Mizpah Hotel. A flurry of activity! While other stories state that the timing of the Mizpah just doesn’t add up with the lives of these men, the hotel features a Jack Dempsey room and Wyatt Earp bar.

The Mizpah changed hands a few times throughout the years until Frank Scott of Las Vegas purchased it in 1979. He updated the hotel to include modern conveniences, all while preserving the antiquated romance that first drew him and his guests to the hotel in the first place. The hotel’s renovation cost $4 million, and the work took two and a half years to complete.

Since 1999, the hotel was shuttered — shut down and quiet, frequented only by the spirits that call the Mizpah home. In early 2011, the hotel was purchased by Fred and Nancy Cline of Cline Cellars in Sonoma, who renovated and reopened the building to the public in August of the same year. The hotel now boasts forty-seven rooms, a bar, and two restaurants. There are even plans to add a casino to the property!

These days, the hotel hosts guests from all over Nevada visiting the area, ghost hunters looking to experience the strangeness of the Clown Motel and Tonopah Cemetery. More importantly, the hotel is home to the Lady in Red and other unexplained entities. Let’s meet them1

Hauntings of the Mizpah Hotel

According to USA Today’s 10 Best Reader’s Choice Awards, the Mizpah Hotel is the nation’s number one haunted hotel. The building is rumored to be completely infested with ghosts, and legends of strange occurrences have been coming out of the hotel since its inception. One especially horrifying story tells of U.S. Senator Key Pittman dying in the hotel in 1940 and being kept on ice in one of the hotel bathtubs.

With one-hundred-and-eleven years of tough Nevada history, the Mizpah’s ghosts have made a reputation for themselves. The current owners of the hotel, the Clines, welcome the spirits of the hotel and state that the ghosts delight in interacting with guests.

One spirit reported at the Mizpah Hotel is that of Rose, a murdered prostitute. Guests report her presence after their items mysteriously move from one place to another. Rose was a high-class lady of the night that lived on the top floor of the Mizpah. She was strangled in the hotel by a jealous john-turned-lover who wanted her to stop her line of work. She refused and sadly met her fate in the same room guests can now book and spend the night in.

Rose isn’t the only spirit at the Mizpah — there’s also a nameless soldier who is reported to haunt the third and fourth floors of the hotel. His name is unknown; all that is known is that he died at the Mizpah Hotel.

There’s also a pair of ghostly children who haunt the third floor. They’re known to play pranks on the guests and are most often seen in hotel rooms and hallways. Multiple guests have reported hearing giggling and hearing their doors open and shut on their own.

You thought that was all? Not quite. There are also two bank robbers who were murdered during a heist by their co-conspirator. Their ghosts are said to haunt the basement, giving cold chills and strange sensations to visitors and staff who happen to find themselves there.

Hauntings Near the Mizpah Hotel

Pretty much right down the street from the Mizpah Hotel lies the Tonopah Cemetery and Clown Motel. There’s even a so-called curse that sits over Tonopah.

The ‘curse’ of Tonopah started with the Tonopah-Belmont Mine Fire. On February 23rd, 1911, the mine fire killed 17 miners. With the way the mine was constructed, there lie two shafts — one upcast and another downcast.

The fire was noted around 5:50 am, and after about an hour of searching for it, they noticed a fire burning some timber that had been piled near the bottom of the shaft. A small, lit candle was thought to be to blame for the fire. When it was first discovered, the superintendent of the time told everyone to ignore it and to go to work since the fire was in a separate location. Most of the miners protested, but the threat of being fired was enough to push them deep into the mines that day.

After a few hours, the superintendent noticed that the flames were spreading quickly, and men were told to withdraw everyone from the mines except those actively fighting the fire. Men were scattered all over, untrained, and disobeyed orders. This resulted in many of them being trapped within the mine and in the midst of the smoke and flames. Due to the mine’s setup, a reversal of air currents through the mine spread the blaze faster than the miners were able to escape. Fourteen of those men that died are now buried at the Tonopah Cemetery.

Visitors to the cemetery report seeing strange orbs and disembodied voices… but the motel next door is the real haunted hotspot.

Visitors to the Clown Motel swear that it’s haunted. Legend states that the clown statues act as vessels for the miner’s ghosts; they possess the dolls and come to life. Apparitions have been seen walking to and from the graveyard, and disembodied voices have been heard saying, ‘we mined’ and ‘we died that day.’

If you go back far enough in history, the Pueblo Native Americans dressed in clown-like costumes, releasing their own personalities and welcoming possessions of nearby spirits. With their identities ever-changing, perhaps clowns allow for portals into the spirit world. Even the motel’s owner says that he hears footsteps and knocking from unoccupied rooms of the motel.

Apparitions of a man have been reported leaving the cemetery and walking around the property at all hours of the day. When one of the previous owners attempted to contact the spirit, he froze and promptly vanished. Even more, clowns themselves have been seen leaving the cemetery, balloons and all.

It seems as if the entire area surrounding Tonopah is haunted. Maybe there really is a curse placed over Tonopah — who knows for sure. have you ever stayed the night in the Mizpah Hotel? If so, did you experience any strange occurrences or witness the Lady in Red?

For more hauntings across America, check out our blog!