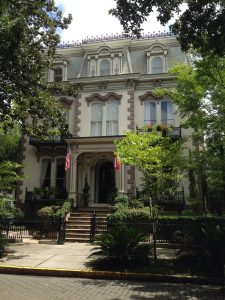 The gorgeous Hamilton-Turner Inn was immortalized in the novel by John Berendt, ‘Midnight in the Garden of Good and Evil.’ The book tells the story of Joe Odom and his time as the manager of the Hamilton-Turner Inn. It also speaks of the wild Gatsby-style shindigs he would throw.

In the Inn’s extensive history, numerous reports of unexplainable activity have surfaced. Visitors claim to see full-bodied apparitions, the sounds of ghostly children giggling, and even billiard balls clacking when no one is holding a cue. Some have even seen a man smoking a cigar on the rooftop of the inn, and occasionally he has been seen holding a rifle. Others claim to see a Civil War soldier walking about the hallways at night, knocking on guest doors. Could this spectral soldier be sticking around because the inn was built atop his grave? Read on to find out!

The Hamilton-Turner Inn was built in 1873, this 17-room home was built for Mr. Samuel Pugh Hamilton and his wife Sarah. He would later become the Mayor of Savannah and Grand Master of the Knights Templar. He and Sarah were known to entertain guests in lavish decadence and wanted a home that would suit their needs. The home was nicknamed ‘The Grand Victorian Lady,’ and is located on Lafayette Square in Savannah’s Historic District.

The inn, referred to lovingly by Savannah residents as the ‘Mansion,’ was the first house in Savannah to install electricity. To no surprise, however, since Mr. Hamilton was the President of the Brush Electric Light and Power Company. A truly amazing sight at the time, legends has it that folks from around the neighborhood would gather outside at dusk just to watch the lights turn on.

During the Civil War, Hamilton was a naval officer who successfully ran the Yankee blockade into the Savannah Harbor. He received a healthy salary for this service and gathered wealth from delivering the goods and supplies needed. Later, Hamilton married Sarah Virginia Stillings in 1866. The two had six children, four together and two boys from Sarah’s previous marriage.

Samuel Hamilton was a lover of the arts, and he collected valuable pieces from all across the world. Hamilton turner the mansion into his very own private art museum where he was sure to display his pieces with the utmost respect and protection. During the night, he would even hire a guard to post on the roof — with a rifle in hand.

One morning, the guard did not come down from his post and he was found lying in a pool of blood later that day. He had been murdered — shot in the back of the head. The killer was never brought to justice. After the murder of the guard, not one person applied to take his place. So, Hamilton took the rifle and kept watch over his kingdom himself. After keeping post on the rooftop for several months, Hamilton himself got sick and died in 1899. Could the rooftop be cursed by the spirit of the guard who died protecting the home? And who is the cigar smoking man seen atop the mansion — could he be the killer, having a smoke after committing that heinous act?

The home stayed with the Hamilton family until 1915 when it was sold to a Dr. Francis Turner. Turner lived in the home with his family and used the basement as his office. The Turners lived there until 1926 when the family moved out and opened the mansion up as a boarding house. Two years later, the mansion was home to the Marine Hospital Nurses. In 1940, Turner and his family returned to the home, and Dr. Turner resumed his practice.

One report claims that Dr. Turner performed autopsies in the basement of the house. How much fact lies behind this claim is unclear, but what is clear is the Turner’s love for lavish parties. Their children were banished upstairs during their get togethers, where they would play with the balls on the billiard table.

To gain the attention of the parents and the party guests one night, the children decided to roll billiards balls down the stairs so that they could retrieve them and catch a glimpse of what the adults were doing. Sadly, one of the little girls got too close to the edge of the top stair and slipped, falling down the steps to her death.

The mansion switched hands again in 1965 and was sold to the Cathedral of St. John the Baptist. The plan was to tear down the historic home and build a playground for the school, but the Historic Savannah Foundation stepped in and saved the Mansion.

Over the next several years, the home had several owners, and was always associated with scandal. In 1997, Charlie and Sue Strickland bought the house from Nancy Hillis and converted it to the Hamilton-Turner Inn that is seen today. Rob and Jane Sales took over the restoration work in 2003, and it was later sold to Gay and Jim Dunlop who own it to this day, working with the Historic Savannah Foundation to maintain the elegant historic home.

Spirits of the Inn

The Hamilton-Turner Inn, at 330 Abercorn Street, is haunted — there’s no doubts about that. It’s even rumored to be the early inspiration behind Walt Disney’s Haunted Mansion. The home’s authentic gothic architecture add it its already unsettling spooky appearance. A CNN report claimed that Disney himself sat down on a bench outside of the home and sketched it.

Ghostly Happenings at the Hamilton

Visitors and guests of the inn as well as staff all have their own unique ghostly reports to make. One of the more common occurrences at the mansion is when the young girl who died here comes out to make herself known. Guests report hearing what sounds like a billiard ball bumping down the steps, thunk, thunk, thunk, until it comes to the bottom stair and rolls across the floor. Others hear children giggling on the upper floor, perhaps remnants of the children who once played up there while their parents partied.

Late one night in 1969, gun shots rang out from the Mansion. No one was living at the home at that time, and it was actually completely vacant. Perhaps this was Hamilton himself still on patrol, guarding his home and art collection.

For another haunting read on one of Savannah’s oldest homes, check out our article about 432 Abercorn Street!