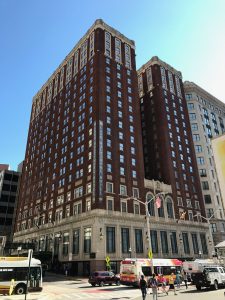 The hotel has seen way more than its fair share of tragic endings, and during the Great Depression, the hotel bore witness to over 20 suicides by jumping after the stock market crashed, leaving countless people bankrupt and hopeless.

Do you want to experience the haunts of Baltimore for yourself? Why not join us for a hauntingly fun Baltimore ghost tour?

History of the Lord Baltimore Hotel

The Lord Baltimore Hotel was designed in a French Renaissance style by the discerning eye of William Lee Stoddart. The hotel opened its grand doors for business in December of 1928, and at 289 feet in height, it stood over all other buildings in the city. It was truly a sight to see!

The building is 22 stories high and features a unique tower with a sky parlor and a roof of copper that has aged beautifully with the rest of the building. The hotel’s history isn’t all grim, as it’s worth mentioning that it voluntarily lifted its racially-restrictive guest policies in 1958 when the House failed to pass a bill prohibiting racial segregation. The Lord Baltimore Hotel wanted people from all walks of life to enjoy its amenities.

William Lee Stoddart was a well-known architect from New Jersey who has been credited with designing multiple urban hotels in the eastern U.S.

Stoddart prided himself on his hotels’ rational and efficient designs that reflected the growing enthusiasm for science in that era. He focused his efforts on serving guests best while maximizing profits for the hotel.

In 1898, Stoddart married Mary Elizabeth Powell in Atlanta. They settled to raise a family in New Jersey. After ten years of marriage, they separated — this caused a scandal in the New York newspapers as marital breakdowns were considered a disgrace in that era.

Mary took their children and moved to Reno. She alleged ‘extreme cruelty,’ and Stoddart counter-sued her stating that she had been a bit too friendly with a fellow architect, Robert Shape.

The New York Times published three personal letters from Mary to William begging him for a divorce while simultaneously asking him for financial help for herself and their three children. Stoddart obliged, and they were divorced sometime between 1908 and 1909.

Stoddart spent his final years in New York and died at 71 from a stroke. 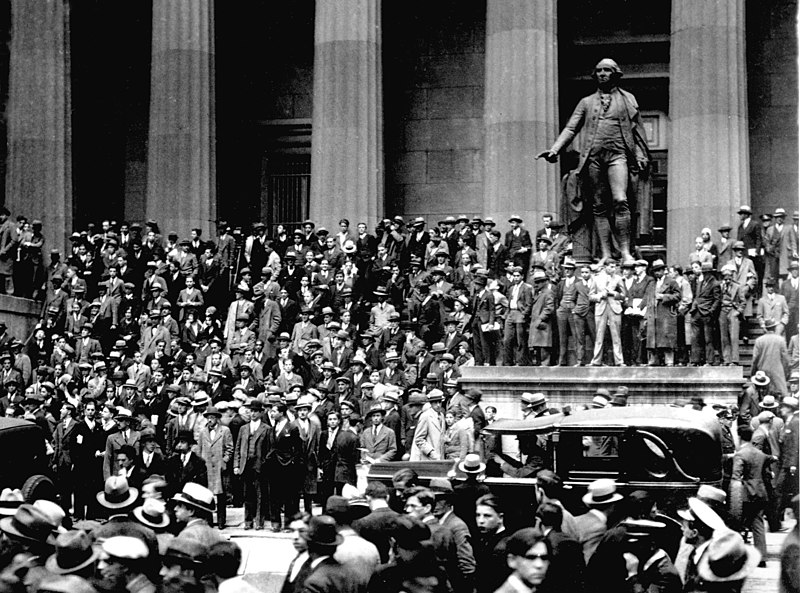 October 24th, 1929, is a day remembered in history. Dubbed ‘Black Thursday,’ the stock market crash on that day resulted from over 16 million shares of stock on the New York Stock Exchange being traded by investors in a single day. The panic lasted until October 29th.

It was noted as the most devastating stock market crash in the history of the United States. The decline of stocks started on Thursday with the most significant sell-off of shares in U.S. history. This crash set the Great Depression into motion.

Beforehand, the ‘Roarin’ Twenties’ was a time of wealth and excess. Optimism ran rampant as a promise of a more prosperous life was given in the continued growth of the industrial sectors after WWI.

Investors speculated and believed that the stock market would rise indefinitely. However, in March of 1929, the Federal Reserve warned of trading on speculation. A minor crash occurred when investors began to sell stocks rapidly, exposing the soft underbelly of the market.

Before the crash, economist Irving Fisher declared that the stock market had reached a ‘permanently high plateau.’ Financial expert Robert Babson predicted an impact would come in early September. The financial gains of the Bull Market were shaken, and the crash rapidly occurred.

Despite financial gurus buying stock to downplay the sell-off, people panicked. The scenario of ‘what goes up, must come down’ took place, and the economy slid into the darkness of the Great Depression.

All over the country, despondent investors lost their financial means, jobs, and economic security within just a few days. The suicide rate all over the United States rose.

Some of those suicides happened at the Lord Baltimore Hotel, and many believe that some ghosts have stayed behind, perhaps trapped by tragedy or unfinished business.

Perhaps the saddest account is that of the desperate parents of a seven-year-old girl named Molly.

The couple, affected horribly by the crash, reportedly stayed at the Lord Baltimore Hotel the weekend after. Perhaps it was to soak up some last-minute time together before their desperation took them from the hotel’s rooftop to the ground below.

Some reports say they didn’t take their daughter over the edge. However, most reports claim they did.

Over the years, many guests claim that the little girl’s ghost is still in the hotel, seen wandering around the 19th floor where she and her parents stayed.

Molly is seen wearing a cream-colored dress and black shoes, and in all accounts, she is accompanied by a red ball. It’s also said that she can be heard crying and searching for her parents, who are seen in the ballroom, dancing.

Another account tells us of an elevator randomly taking rides up to the 19th floor. Many staff members believe that the 19th floor is the most haunted and actively try to avoid it—guests riding the elevator report feeling icy hands on them and the ever-so-present feeling of being watched.

Calls from guests have come in complaining of a strange woman appearing in guest rooms throughout the day and night; others report their belongings missing or moved. Televisions have been known to turn on and off at random, and staff swears that the spirits at the hotel are harmless and are only looking to gain some attention from the living.