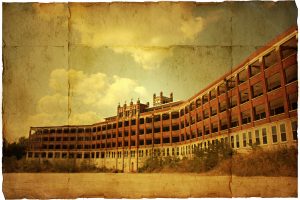 The Waverly Hills Sanatorium is one whose name rings more than a few bells. Well known in the ghost hunting community, the former sanatorium is located in Louisville, Kentucky. Opening its doors in the early 1900s, the sanatorium was created to house the growing number of ‘White Plague’ patients, or those suffering from tuberculosis. Like many other sanatoriums of its time and purpose, Waverly Hills closed its doors due to the use of the antibiotic drug streptomycin, which lowered the need for such a hospital. Originally, the plan was to turn it into a hotel, but obviously that is no longer the case.

The land that the asylum was built on, known as ‘Waverly Hill,’ was purchased by Major Thomas H. Hays in 1883 and was the Hay’s family home. Since the new home was far from any schools, Major Hays opened his very own local school for his daughters to attend. He started a one-room schoolhouse on Pages Lane and hired a woman named Lizzie Harris as the teacher. Due to her fondness for Walter Scott’s Waverley novels, she called the schoolhouse ‘Waverley School.’ Major Hays liked the name, he said it had a peaceful sound and decided to also name his property Waverley Hill. The Board of Tuberculosis kept the name when they bought the land and opened the sanatorium. The second ‘e’ was dropped at some point in history, but it’s not exactly clear when.

In the early 1900s, Jefferson County was stricken with an outbreak of tuberculosis. Many of these cases in Louisville at the time were centralized along the wetlands of the Ohio River. the moist, humid environment was a perfect breeding ground for the tuberculosis bacteria. To try and contain the disease, a two-story wooden sanatorium was opened which featured open air pavilions, each housing 20 patients for the treatment of ‘early cases.’

As the need for more space grew, the city of Louisville began to prepare to build a new Louisville City Hospital, and the hospital commissioners decided in their plans that there would be no provision in the new city hospital for the admission of tuberculosis patients, which prompted the Board of Tuberculosis to erect a hospital specially for the care of advanced cases of pulmonary tuberculosis.

In the summer of 1912, all tuberculosis patients from the city hospital were relocated to temporary quarters in tents on the grounds of Waverly Hills as they awaited the finish of the sanatorium. Not entirely bad news, considering that the belief was that fresh air was the best treatment for tuberculosis at the time. Since antibiotics did not exist alongside the sanatorium’s tenure, other forms of aid were used to treat patients such as heat lamps, fresh air, and positive reassurance. Prior to the development of a vaccine, treatments for tuberculosis ranged from harmless to completely barbaric. Some ‘treatments’ were brutal, and in some cases patients had their lungs surgically resected, or partially removed and collapsed in order to let the organ ‘rest.’

Because of the highly contagious nature of the disease, Waverly Hills Sanatorium enacted extreme quarantine measures and the asylum functioned as an island, producing its own food, raising its own animals, and even ran a functioning post office.

Tunnels were built on the first floor of the sanatorium and were used as an entrance and exit for the staff of the asylum. 500 feet of corridors line the asylum, once only meant for worker travel, ended up being used to transport corpses of the dead from inside the asylum, since the sight of the dead being carried away lowered patient morale. Doctors at the asylum also believed that using the tunnels would help to lower the disease’s spreading rate.

The sanatorium had more than a couple of plans laid out for its future after its closure in June of 1961, such as apartment homes, a geriatric center, and even a prison.

Today, the sanatorium is owned by a private investor who open the building up for tours and overnight guests. The tours also aim to preserve the history of the asylum, telling the stories of the patients who died there.

Nearly 50,000 people died at the sanatorium. The dead were transported out of the hospital using a 537-foot long tunnel that led straight to Dixie Highway. Countless haunted stories have come out of the sanatorium, including one about a nurse who committed suicide there, as well as a young boy named Tim.

Shadow figures, disembodied screams and laughs, as well as full-bodied apparitions are also reported by visitors and staff. Known as one of the most haunted places on Earth, Waverly Hills Sanatorium has no shortage of unexplained happenings.

The Waverly Hills Sanatorium was left to decay before it was placed on the Register of Historic Places. The abandoned asylum gained its infamous reputation quickly and reports from visitors and investigators cemented the building’s sinister status.

In 2001, Charles and Tina Mattingly purchased the property and began to restore it. Volunteers soon started to have their own encounters, telling of slamming doors and sightings of a mysterious man in white drifting around the halls of the hospital. Others had run-ins with Tim, a boy that likes to play ball with visitors.

The hallways of the sanatorium are seeping in melancholy energy. While many patients recovered from their illness here, just as many others died, breathing their final, painful breaths, within the walls of the hospital. A couple of visitors from Spiritual Travels visited the sanatorium, and told of their experiences there.

“As we entered the fifth floor, a friend in the group whispered to me that he suddenly felt an oppressive weight. “Do you feel anything?” he asked. “Not a thing,” I whispered back. But then our guide corroborated my friend’s intuition by explaining that a great deal of paranormal activity had been reported in this room over the years, perhaps connected to the suicide of a nurse that had occurred here many years ago.”

So, who was this nurse? Research into her life and her death did not turn up many answers, and her suicide within the walls cannot be confirmed. It would be no surprise, however, as the nurses that worked here bore witness to unspeakable amounts of pain and suffering. It’s too much for any human mind to bear.

Want to know more about America’s haunted hospitals? Check out our article on the haunted Pennhurst Asylum!