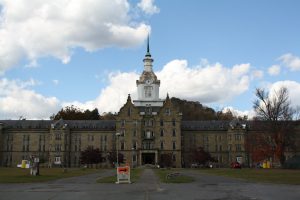 The Trans-Allegheny Lunatic Asylum, also known as the Weston State Hospital, was a Kirkbride style psychiatric hospital that opened its doors to the public in 1864. The hospital is known for its hauntings and is one of the most haunted spots in the whole of West Virginia. The asylum keeps secrets dating back to the Civil War, holding them tightly within its stone walls. What could those secrets be? Read on to find out.

Known as the Weston State Hospital when it was constructed in the 1800s, Trans-Allegheny Lunatic Asylum’s construction was stopped in 1858 when the Union soldiers wanted to use the land during the Civil War. The building, like many other asylums at the time, was constructed in the Kirkbride style. Thomas Story Kirkbride was a mentally ill man who wanted nothing more than to be associated in a positive light with American psychiatric facilities. Kirkbride believed patients should be allowed to roam around the facility and the grounds of the asylum. He believed that giving patients more freedom was essential to their healing and that soon they would even be ‘cured’ of their illness. Some of the patients remember fond memories of the asylum, the asylum truly used to live up to its name.

“I remember the Thanksgiving thing was great. We had great turkeys. And the Christmas thing was wonderful… it was like a fairy tale atmosphere. It’s like, I must be in heaven. I’m not in a nut house, i’m in heaven.”

Former patient of the TALA

At its inception, the hospital could comfortably contain about 250 patients in private rooms. In 1863, an increase in mental health diagnoses led to the hospital admitting more patients than it could handle. 500 more people were added to the already full hospital, and the asylum started to struggle to keep up with the amount of patients and the care required. Conditions started to decline — rapidly.

Patients were crammed together, with four or five people in one room that was meant to only fit one person. By 1938, the asylum was over six times its capacity. Patients began to take advantage of the situation and were completely out of control of nurses and doctors. Food supplies were running low, and the hospital even started to use hallways for patient rooms. The overcrowding of the asylum was caused by more than just ‘not enough space,’ while plenty of the patients actually suffered from some sort of mental illness, a lot of those admitted were medical reasons, such as asthma, tuberculosis, and rabies. Even stranger, others were wives who were insubordinate to their husbands, indigestion, and political excitement. If one truly thinks about it, most people would have been admitted at some point in their lives — who hasn’t fought with a spouse, had a stomachache or been upset with the world’s political climate?

At the peak of the 1950s, the hospital contained a whopping 2,600 patients. Meant to only house 250, this was an immense overcrowding, leading to fighting and a general sense of apathy that ran rampant throughout the corridors. Patients were forced to sleep on the floor and in freezing rooms with no furniture or heat. Windows were coated in mold, the wallpaper was peeling off the walls, the asylum had begun to look like it was abandoned before it even was.

During this time, the Trans-Allegheny Lunatic Asylum began performing experimental lobotomies. The hospital performed over 4,000 lobotomies which left healthy patients with irreparable brain damage and hemorrhages. The hospital used the ‘ice pick’ method, which involved slipping a thin, pointed rod into the patient’s eye socket, and then a hammer was used to sever the connective tissue in the frontal lobe of the brain, which resulted in more than a few deaths. Lobotomies regularly left patients without a personality or affect, as their neural connections were severed. Some of these ‘therapies’ truly altered patient lives in a terrible way. Chlorpromazine, also known as Thorazine, was a medicine intended to treat psychotic disorders, but it was often prescribed to only keep patients in a catatonic state. Insulin shock therapy, which sent patients into comas, as well as electroconvulsive therapy, also known as shock treatment, was also employed by the staff at the asylum.

Hauntings at the Trans-Allegheny Lunatic Asylum

According to the Trans-Allegheny Lunatic asylum official website, there are about eight resident spirits living (not living?) at the asylum. The asylum was purchased about a decade ago by the family of Rebecca Jordan, and she says it didn’t take long before the asylum’s spectral patients paid a visit to her. While giving a tour of the facility, she felt someone grab her shoulder and squeeze.

Understanding spirits and what they went through makes it easier for them to communicate, but also creates a sense of empathy — these spirits are people who once had full lives, just as anyone else. There are a few choice locations throughout the asylum that are said to have activity. It’s no surprise, with such torture and neglect, the Trans-Allegheny Lunatic Asylum’s dark history can’t help but shine through like dark sunbeams.

In a room toward the back end of one wing, a patient was murdered by two others. They attempted to hang him, but when that failed they placed his head under a bed frame and jumped on it until the bed frame touched the floor. Other patients were also murdered in cold blood by their peers, as overcrowding, mental illness, and poor care became a lethal combination for aggression. This room is known for its cold spots and quiet cries, which is said to be Dean, the man who was murdered in his room.

Asylum staff were empowered to send their patients into isolation if they were deemed ‘uncontrollable.’ This, of course, was up to the discretion of staff that was already irritated and overworked. Isolation was so terrible that patients would do just about anything to get out of it. One story, in particular, is especially surprising. A former boxer, who suffered from head injuries during his career that left him violent and emotionless, attempted to beat down the metal door that isolated him. He ended up ripping the door off of its hinges, leaving visible dents in the steel. When he finally got the door off, he handed it to one of the nurses and calmly returned to his room. The rooms used most for isolation tend to have violent energies attached to them, with visitors reporting being pushed or scratched, as well as disembodied voices saying ‘get me out of here.’

Other Hauntings at the Asylum

More than a few ghosts are known to staff of the asylum, including Lily, a playful and friendly child spirit who is believed to have spent her entire life at the hospital. Back in the days of the asylum’s operation, pregnant women who were admitted would often give birth at the hospital, their baby living there with them throughout their stay. Lily is known for her laughter, as well as her interest in playing games with staff and visitors who pay her attention. She is an active part of the asylum community to this day.

Other experiences include dark shadows, objects moving on their own, disembodied voices and cries, bangs on the walls, breaking glass, among others.

The Trans-Allegheny Lunatic Asylum operates today as a historic and ghostly tour hotspot. Haunting stories combined with the foreboding look of the structures create the contrasts that the asylum is well known for. The asylum itself was created with good intentions, it was meant to treat people who needed care. Soon, it became misused, and the people it was originally meant to care for were abused. After closing its doors for good in 1994, they reopened to educate and tell the stories of the patients who lived their lives behind its walls. If you do choose to visit the asylum, don’t be surprised if you feel a strange chill or touch during your tour.

For more haunted asylums, check out our article about the Athens Mental Hospital in Ohio!