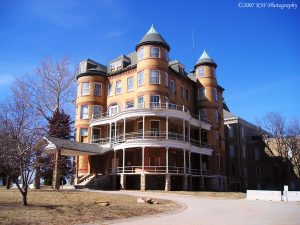 Topeka State Hospital, formerly known as the Topeka Insane Asylum is located in its namesake city, Topeka, Kansas. It was an institution built to house the population of people with mental illnesses and was completed in 1879. Many horror stories exist about the hospital including that of a journalist who visited the facility and witnessed a patient that had been in restraints for so long that his skin had begun to grow around the restraints.

The horrors at Topeka State Hospital don’t stop there. The facility is infamous for its neglect and abuse of its patients, with reports of assault, rape, and some patients were even kept chained for months on end completely naked.

The Topeka State Hospital was in operation from 1872 until 1997. Located at 2700 W. 6th Street, the hospital opened to house patients from the Osawatomie State Hospital after it had become overcrowded. The first buildings in both Topeka and Osawatomie were designed by John G. Haskell according to the Kirkbride plan, similar to Danvers State Hospital. The Kirkbride plan was based on the theories of Philadelphia psychiatrist Thomas Story Kirkbride who suggested that natural light and proper air circulation would have a positive impact on the mentally ill.

The hospital operated as usual until 1948 came along with countless complaints about the way patients were being treated within the hospital. That’s just about 100 years of abuse. A panel was put into place to make changes to the facility and improvements were made after the darkness at the hospital has been brought to the light. By the 1960s, it was one of the top hospitals of its kind in the United States.

By 2010, the majority of the hospital had been demolished and in June of that same year, the center building was also demolished. A sports park now occupies the land where Topeka State Hospital once stood.

The Topeka State Hospital was meant to provide relief to the Osawatomie State Hospital and was built on more than 80 acres of land. As time went on, reports of heinous abuse from both the administration and faculty began to emerge. Torture, starvation, sexual abuse and assault were commonplace. The worst thing about all of this? That no one was able to do anything about the atrocities within the hospitals because the workers and doctors were protected by the Kansas state government.

During a thorough investigation initiated by former Kansas Governor Frank Carlson, it was discovered that very little records or paperwork existed for a handful of the admitted patients, and that instead of being treated for their illnesses, they were thrown into the hospital with the others, left the roam around the halls aimlessly. After the report was published, funding for the Topeka State Hospital nearly doubled, corrupt staff members were let go and social workers alongside doctors began to actually evaluate and treat patients. Some were even released after they had received proper therapy.

During its operation, the hospital was infamous for its use of sterilization program, the use of hydrotherapy, and castration to treat ‘imbeciles.’ A 1913 sterilization law was introduced and aimed at ‘habitual criminals, idiots, epileptics, imbeciles, and the insane.’ As a result, fifty-four people were sterilized in Topeka State Hospital before 1921. In the years that followed, that number increased dramatically before the practice was stopped in the 1950s.

In 1951, the hospital faced heat again when it was found that a fifty-nine year old Danish immigrant named John Crabb had been wrongly incarcerated despite not being mentally ill at all.

Newspapers from the late 1800s were filled to the brim with reports of abuse occurring inside the asylum. In one particular case, a witness came forward with some startling information about a patient named Dodd.

The witness told that he had seen an attendant kick Dodd on numerous occasions, sometimes strangling him and jumping on his chest. During his final beating, Dodd was knocked down and the witness stated that Dodd was dragged into room 18. The door shut behind him and the witness heard a struggle, a groan, and saw Dodd being carried out of the room dead.

A county attorney tried to launch a dispute against the attendant, but the governor of Kansas refused to launch an investigation into the death and the matter was dropped.

In 1896, reports surfaced that elderly soldiers were being taken to Kansas state asylums and killed off. According to one article, Gust Mauer, an inmate at the Topeka State Hospital was sent home with two black eyes and a broken neck and nose. His body was accompanied by a letter from the hospital’s Superintendent that stated he had died of apoplexy, yet no effort was ever made to right the wrong and the Superintendent was still in office after the event.

In the spring of 1911, charges were filed against the hospital by former and current employees. A local newspaper shared part of a letter that was included in the charges:

I wish to make the statement that John Green, a patient in Ward E, 2, lay ill in bed for eight days and died; and during this period he was given no food or medicine. His condition was reported every morning and nothing was done.

The body of Green was taken to the dissecting room, his brain taken out and used in a demonstration by Dr. T. C. Biddle before a class in the chapel the next day without the consent of Green’s relatives. Biddle wanted the brain to demonstrate the condition of a congested brain. Attendants Roberts and Johnson could not be convinced as they well knew the patient came to his death by starvation.

One witness wrote about a patient who was seen wearing handcuffs, being lead around the property with a rope tied to his neck. Sometimes the attendant would get drunk and beat the patient. He even tied the patient to a tree, leaving him there for hours. On one occasion, the patient was tied up onto a door while the attendant strangled him as a ‘punishment.’

On top of all of these specific instances of abuse, the hospital also enforced strict visitation rights, not allowing parents to see their children, and out of the 29 wards in the hospital, visitors were only allowed to visit to four of them.

The amount of cases of abuse and neglect are shocking, truly — but other tragedies occurred at the hospital over the years as well. Murders, assault, read on to learn about it all.

In 1992, the hospital broke headlines when music and activity specialist Stephanie Uhlrig was murdered by a patient named Kenneth D. Waddell who was classed as violent and high-risk. Uhlrig and another therapist took some of the patients out to watch a movie and once they arrived back at the hospital, Waddell killed Uhlrig. Her body was found in a bathroom.

The hospital was cleared of any wrongdoing.

There lies a cemetery on the hospital grounds, the final resting place of patients who died in the hospital. Only 16 of the 1,157 graves have headstones, most of the souls are left nameless. Visitors to the hospital grounds can now witness the nightmarish and foreboding bits of the buildings that still stand, as well as the patient cemetery.

Others report seeing orbs and hearing strange moans coming from the cemetery. Could this be the spirits of patients who have passed away, attempting to make their names heard?

The entire grounds of the former hospital are thought to be haunted, a hallowed ground, perhaps.

Have you ever visited Topeka State Hospital?