The Most Haunted and Terrifying Asylum in Utah: 49 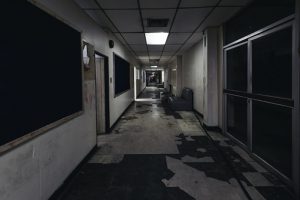 Asylum 49’s history began in 1873 in Utah. Think gold rushes, miners left and right, summer heat and desert dust. Once known as Old Tooele Hospital, it was originally built as a residence by Samuel F. Lee. It was converted into a residence for the elderly in 1913 and was known as the ‘county poor house.’ Later on it became the Tooele Hospital and then reverted back again to an elderly care facility when the new Tooele Hospital was constructed in 1953. The original building no longer stands, but with the amount of hauntings that are reported from the new structure, one begins to understand just how haunted land can be.

Looking to experience the haunts of western America for yourself? Check out our tour map and see if we’re offering a ghost tour in your city!

Asylum 49 used to be called Old Tooele Hospital. It started as a private residence for Samuel F. Lee and his family. Over time, the face of the building changed, ranging from a poorhouse to a public hospital. As the population of Tooele and Utah itself began to grow, residents and administrators noticed that the building could be used for much more, and it soon after became the Tooele Hospital.

The hospital opened in 1953 but never received enough funding. Tooele Hospital didn’t even have a morgue for their dead. Their solution? To stack bodies in an unrefrigerated room until the county coroner finally came to sign their name on their death certificates. A truly macabre and inhumane way to treat the remains of the dead.

The new building was built in 1953 and was originally known as the Tooele Army Depot. Minor adjustments were made to the building to ensure that it would be able to provide medical care to residents in need. At one point, it was hailed as a state-of-the-art facility. These days, half of the newer-constructed building operates as a senior living facility. The other half operates as Asylum 49.

Even darker still, the Tooele County Cemetery is adjacent to the new building — a stark reminder for the elderly residents who live here, and a possible reason for the ghostly activity that is reported to this day, perhaps?

The Old Tooele Hospital site is the location of many acclaimed hauntings as well as the backdrop for various Hollywood hits. ‘The Fastest Indian,’ the true story of Burt Munro was filmed here, as well as the Steven King post-apocalyptic fantasy ‘The Stand.’

In 2006, a man named Kimm Andersen saw the building and wanted to create a haunted attraction for the community during Halloween season. Kimm originally had a tough time accepting the stories of hauntings in the building and was a stark skeptic. However, after spending countless hours in the building getting the haunt ready for the public, he quickly emerged as a believer.

Who, or what causes the reports of unexplained activity at the Old Tooele Hospital site? Could the demolition and following construction of the new building have stirred up some of the area’s dead? Maybe the present use of the building as a tourist attraction has gotten on the bad side of some resident spirits. Read on to find out!

Even though the building is slated as a haunted house and popular tourist attraction, actual reports of ghostly activity exist at Asylum 49. Multiple investigations have been conducted at the hospital, all of which have turned up some experiences or strange evidence.

Many reports have come from the hospital telling of an old man known only as ‘Wes.’ It is said that he was a patient at the elderly care facility and that he suffered greatly from Alzheimer’s. At the time of his death, he was very confused and scared, and it’s thought that this energy has carried over into death with him. A heartbreaking realization, truly. He is most reported in and outside of the room that he stayed in while residing at the building.

At one point, a medium had come to visit the structure to assist Wes in ‘crossing over.’ She stated that it was almost impossible as there was an extremely dark entity that was attached to him, staying very close to his back.

As the site once hosted Samuel F. Lee’s family home, it’s no surprise that he is reported to haunt the building as well! In life, Samuel contributed in many ways to his community. His son, Thomas, who has been estimated to be about 7 years old, is often seen lingering alongside his father at the hospital. He is a playful spirit who enjoys guests and loves to play pranks on visiting tourists.

Samuel himself has been said to talk to visitors, telling them of all the good he did during his life. It seems as if he wants recognition for his good deeds while on the physical plane.

Maria and the Portal

Perhaps the most interesting of all of the hauntings is that of a nurse in white named Maria. She is believed to guard a ‘portal’ that has been reportedly seen at the facility. The portal is described as being extremely bright, and formed as a way to direct the deceased of the building into the afterlife. People who have passed away at the elderly care facility have reported seeing this portal a few days before their deaths. However, the nurse Maria warns them to avoid the portal, and that the ‘other side’ of it is dangerous.

Spirit portals are a topic of much discussion and disagreement in the ghost community. Many believe that these portals exist all around us, but are especially prominent in areas where multiple deaths have occurred, such as a hospital. Others state that the portals house entities that come to claim spirits after their physical body dies. One such story at the facility seems to corroborate that theory.

A man in black was once seen entering the room of a patient. Wondering who this visitor was at such a late hour, one of the hospital nurses followed him to inform him that visiting hours were over and he would have to come back the next day. However, when she reached the door of the patient’s room, it was locked. She called over a couple of other nurses in an attempt to open it.

It was a struggle, and after what felt like an eternity, they managed to pry the door open. When they entered the room, the man in black was nowhere to be found and the patient had passed away. Could this entity have come to guide this spirit to the afterlife?

Several other entities are said to haunt the facility. Their names are Richard, James, Ned, Peter, and a young child named Jessica. These spirits like to make themselves known to staff and visitors through their disembodied voices, cold touches, and apparitions.

Guests to Asylum 49 report orbs, mists, and even the unsettling feeling of being watched. While this could just be part of the haunt, staff of Asylum 49 maintain that the hauntings are very real, and completely separate from the manufactured ones.

The Old Tooele Hospital, the new hospital, and Asylum 49 all have one thing in common. The land they were built upon. The hauntings of Asylum 49 are active, and while many people state that the haunted tourist attraction is a slap in the face to the people who died at the facility, staff ensure that the actual ghosts of the building are respected and understood.

Have you ever visited Asylum 49? Did you have any strange experiences inside (besides those of a haunted attraction, of course)

Want to delve deeper into the hauntings of America? Check out our blog!