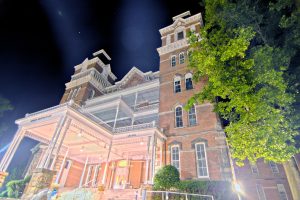 The Athens Lunatic Asylum, now a development known as The Ridges, was a mental hospital in Athens, Ohio. It was in operation from 1874 until 1993. During its tenure, the hospital provided a wide variety of services to many different types of patients including Civil War veterans, children, and those who were declared to be ‘mentally unwell’ including violent criminals. The hospital is best known as a site of the infamous lobotomy procedure, as well as countless ghostly sightings.

One may think Ohio is unassuming in regards to hauntings, but let us prove otherwise with our Cincinnati ghost tour!

Levi T. Scofield of Cleveland, Ohio was the original architect for the building. The hospital grounds were designed by Cincinnati’s Herman Haerlin. The design was influenced by Dr. Thomas Story Kirkbride, a 19th-century physician who developed a special type of design style for mental asylums, which are characterized by their bat-wing floor plan and sprawling grounds.

The land where the hospital was built belonged to the Arthur Coates and Eliakim H. Moore farms. The ground was broken in mid-autumn of 1868, with the first iteration of the asylum consisting of only 141 acres, much less than the usual Kirkbride designs of the time. Over the years, the hospital sprawled, and it grew to occupy over 1,000 acres.

Athens Lunatic Asylum opened its doors for operation on January 9th, 1874. Within two years, the hospital was renamed The Athens Hospital for the Insane and changed names, some a bit questionable, a few times before finally landing on the Athens Mental Health Center.

Many Kirkbride asylums operated as makeshift communities — for decades the hospital had livestock, gardens, and farming fields. It also included an orchard, a dairy, a plant to generate steam heat, and a carriage shop. A large percentage of the labor carried out daily on the farm was done by the hospital’s patients. Skilled labor was seen by the Kirkbride Plan as a form of therapy and was also economically advantageous to the state.

The asylum expanded exponentially by 1950, where two other hospitals and cottages are built to house more patients. by the mid-1950s, the hospital was the town’s largest employer with 1,800 patients on a one-thousand-nineteen acre, 78 building campus. At its peak, the Athens Lunatic Asylum served fifteen Ohio counties.

The first patient treated at the hospital was a 14-year-old girl with epilepsy, which was considered to be caused by the possession of a demon. Epilepsy was a reason for admission in the early years of the asylum. The first annual report stated that 31 men and 19 women were admitted due to epilepsy during the first year.

Ailments such as alcohol addiction, tuberculosis, and menopause were cause for enrollment at the asylum. For female patients, the leading causes of their ‘insanity’ were ‘change of life,’ ‘menstrual derangements,’ and ‘hysteria.’ Women with postpartum depression were also sent to the asylum to recover. As one can see, patients were often institutionalized for ridiculous and sometimes even fallacious reasons.

Records from the asylum tell of what caused mental illness during the time of its operations, as well as the practice of lobotomies and other harmful treatments. The Ohio University collected information in regards to the training that the asylum employees underwent, some of which had none. More disturbing is the documentation of electroshock therapy, lobotomy, hydrotherapy, and early psychotropic drugs, most of which have become known as being extremely inhumane.

The mental health industry rapidly changed in the 1950s for the better. Research began to show that the mentally ill did not pose an inherent danger to the people around them and it wasn’t necessary to separate them from their homes and communities. The public also was becoming aware of the risks and inhumane nature of procedures like lobotomies and electroshock therapy. The availability of medicines for the treatment of mental illness was also increasing, and allowed for most patients to be treated without the need for institutionalization.

The Athens Asylum declined through the end of the 20th century and eventually closed in 1993. In the same year, the Athen’s Lunatic Asylums’ property was deeded to Ohio University. The college kept the property in good shape and it was maintained for reuse.

The property was restored into a mixed-use development called ‘The Ridges.’ and most of the buildings have been renovated and turned into classrooms and offices.

Many mysteries surround the asylum due to the secrecy and lack of information surrounding the patents who were treated there. What is known, is that there are 1,930 people buried across three cemeteries located at The Ridges. Most of these people were patients who were unclaimed by their families and are marked only with a number — their names dying with them, a truly heartbreaking thought. By the 1980s the cemeteries were no longer being taken care of, and vandalism as well as natural weathering caused irreparable damage. These days, the National Alliance on Mental Illness is working to gather information about the patients buried there, and to restore their headstones and the cemetery as a whole, bringing their memory back to the forefront.

Hauntings of the Athens Lunatic Asylum

While many deaths occurred in and around the asylum, as few truly stand out. One tells of a patient named Margaret Schilling, who disappeared on December 1st, 1978. It wasn’t until January the following year that her body was discovered in a long-abandoned ward. While her autopsy showed she died of heart failure, she was found completely named with her clothing neatly folded next to her body. More interesting in the permanent stain that her body left behind, imprinted on the floor, unable to be removed by numerous cleanings. Her spirit is said to be seen staring down from the window of the room where her body was found, she’s also been seen attempting escape, and is known the wander the building at night.

Other former patients are also said to have stayed behind, appearing as full-bodied apparitions standing in the empty wings of the former hospital, disembodied voices and yells. Squeaking gurneys, strange lights, and screams are also commonplace. Even more frightening, there are rumors that patients who were shackled in the basement for ‘bad behavior’ still remain.

The cemeteries are all reportedly haunted as well. Shadow figures running and hiding behind trees and headstones are reported, and in one area, the grave’s linear shapes form a circle, which is said to be an old witches meeting spot.

While the truth is mixed in with legend when it comes to the asylum, there is no doubt that many people suffered here at the hands of abusive staff members and archaic methods of healing. Spirits of those who died and were forgotten are the loudest, banging on the windows and the walls of the old asylum, wandering the grounds, looking to catch the attention of anyone who comes looking for them.

For another spooky asylum down under, check out our article about Australia’s Aradale Asylum!