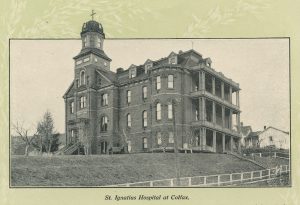 Back when St. Ignatius Hospital was built, it was custom for them to be constructed only under religious order — most hospitals in the west would not exist without them. St. Ignatius is one of the first hospitals built in the Inland Northwest by the Sisters of Charity.

Abandoned but not forgotten, St. Ignatius Hospital provided top-of-the-line healthcare to the Palouse region from 1893 until 1964, when the hospital closed its doors.

Since then, the former hospital has been the subject of countless stories and reports of strange hauntings. But why? Let’s look at the hospital’s history and what could have occurred there to cause such a negative stain on the property.

In 1892, the Reverend Jachern, a Roman Catholic priest, recognized a need for improved healthcare in the PNW area. He traveled to Portland, Oregon, and invited the Sisters of Charity to build a lovely hospital on the Palouse.

To build healthcare facilities, religious orders across America relied on private donations or sponsors to fund their projects. Colfax, Pullman, and Palouse Cities all made competitive offers for the new hospital to be built in their town — Colfax won the bid after they added an offer of free water, land, and an interest-free load of $3000 as well as another $5000 from the Colfax Chamber of Commerce.

Construction of St. Ignatius Hospital began on April 17th, 1893. Three of the Sisters of Charity provided care onsite while the hospital was being built. Their first patient was treated for pneumonia. Construction of the new hospital was completed in 1894 — the region now had a state-of-the-art facility to bring their sick to be nursed back to health.

St. Ignatius struggled, relying on donations and what its patients could afford to pay. It had no government assistance and was unable to make upgrades as needed. The Sisters of Charity could not keep up with the growing expense of running the hospital. It faced closure by the state due to its lack of modern amenities and declining population.

In August 1964, the hospital closed, and a new facility was built. The original St. Ignatius Hospital was turned into an assisted living facility until it was closed in 2000. In 2015, the hospital was added to the Washington Trust for Historic Preservation. 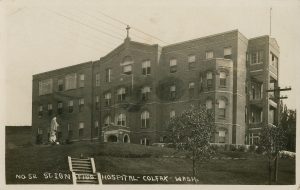 These days, the ghosts of past patients are believed to roam the halls, including the spirit of a man who was crushed by two railroad cars. Despite its hauntings, St. Ignatius Hospital is in dire need of saving, and efforts have been underway to try and save this historic and haunted piece of Colfax history.

Colfax is a small city in Whitman County, just outside Pullman. The hospital has been an integral part of the Colfax community since its inception in the late 1800s and has garnered national attention due to its reported hauntings and strange occurrences.

The first patient to die at the hospital was a local railroad employee who was crushed between two railroad cars while on the job. Locals and curious visitors tell of a large, angry black mass that is said to attack anyone who attempts to come near it.

Perhaps this is the restless spirit of the railroad worker, confused and alone, unable to move on from within the walls of the decrepit hospital.

During the past couple of years alone, Chamber Executive Director Valoree Gregory has encountered some high strangeness at this abandoned healthcare facility:

‘During the past few years, Gregory said she heard a handful of full-on conversations, saw a dark shadow come down the hall, and felt a ghostly kick to the back of her foot when no one else was in the notoriously haunted building.’

The building was almost purchased a few times, but the deals always fall through for some reason or another. Chamber President Nancy Cochran had this to say about the hospital…

She said she had a tough time saying goodbye to the building’s spirits.

“We kind of got to know some of the ghosts personally,” she said. “ … Which seems kind of weird with a ghost, but that’s the point we’ve gotten to.”

What do you think? Do you believe that buildings such as St. Ignatius Hospital can hold onto energies and entities from their past?