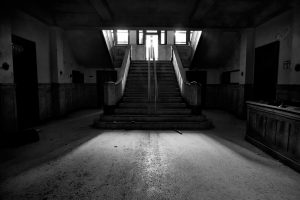 Before it was the Rolling Hills Asylum, it was the Genesee County Poor Farm, often called ‘The Old County Home.’ A poor farm was an institution where paupers were maintained with public funds. Residents included orphans, widows, minor criminals, as well as people with handicaps. These days, its a haunted hotspot situated in the ‘rolling hills’ of Bethany, New York.

History of the Rolling Hills Asylum

A poorhouse often resembled a reformatory, where orphaned children, destitute elderly, physically and mentally handicapped people, as well as minor criminals were given a place to stay. These institutions were often settled on the grounds of a working farm, where able-bodied residents were required to work in order to continue living there. Such ‘farms’ were common in the United States in the early 19th and 20th centuries.

On December 4th, 1826, the Genesee County Board of Supervisors met in Bethany for the purpose of establishing a poorhouse. The geographical center of the county was selected as the site for the asylum, and was scheduled to open its doors on the first of January, 1827. An official announcement was even posted in the local newspaper:

“Notice is hereby given that the Genesee County Poorhouse will be ready for the reception of paupers on the first day of January 1827 … The Overseers of the Poor of the several towns of the County of Genesee are requested, in all cases of removal of paupers to the county poorhouse, to send with them their clothing, beds, bedding and such other articles belonging to the paupers as may be necessary and useful to them.”

Those eligible for assistance were as follows:

In 1828, the Genesee County Board constructed a stone building that was attached to the asylum with the purpose of confining those who misbehaved in the facility. This started the path of abuse that the Rolling Hills Asylum is well known for today. The Genesee County Poor Farm was a self-sufficient working farm that spanned over 200 acres, providing food and fuel for the area. Residents of the asylum were referred to as inmates, no matter why they were housed there. The raising of pigs, horses, chickens, and ducks, as well as raising vegetable and fruit crops, canning jams, jellies and meats were all part of the daily work and chores. There was even a woodshop that was used to make coffins.

Those who died at the facility would be buried on the property, and a cemetery was established, though details about it are nonexistent. A burying ground is mentioned on a proceeding from 1886 that states it was improved with a fence without disturbing the graves. The cemetery faded over time, the grasses growing over the weathered stones that once marked the final resting places of those who passed at the asylum.

The Rolling Hills Asylum witnessed over 1,700 documented deaths on the property during its tenure, and it is now known as the second most haunted site in the United States.

A few tragic stories have rolled out of Rolling Hills, each one as heartbreaking as the last.

Roy was a resident of the asylum who suffered from gigantism. This was a physical deformity that left his hands and feet oversized, and his height well over seven feet. Roy was the son of a prominent banker in New York, and was sent to live at the asylum because his family considered him an embarrassment. He wad brought to the asylum at the age of 12, and lived there until his death at 62. He loved opera music and was well-known for his kindness. Today, his hulking shadow is reported roaming throughout the hallways. One story told by the owner of the building truly captures Roy’s purity. She tells about running into a rat in the infirmary, terrified by it, she screamed and ran away. The very next day, she found the rat dead on the stairs, its neck broken. On the wall above the rat was a massive bloody handprint. She believes that Roy witnessed her distress and killed the rat for her.

Others at the asylum were not so kind. One of the nurses in the infirmary, known as Nurse Emmie, was known for her cruelty to the patients. She was feared by staff and patients and was even rumored to have performed Satanic rituals and black magic on the residents. Reports have circulated that Nurse Emmie still roams the halls of the asylum, and visitors hear cackling and banging doors coming from the infirmary.

Another hotspot at the asylum, Hattie’s Room is famous for its elderly resident. This room is home to the disembodied voice yelling ‘hello!’ This is believed to be former resident, Hattie — a blind woman who used to yell out hello all day and night to get the attention of nurses. Her yells are still heard today, as a quiet hello can be heard by visitors when they walk past the room.

On the second floor, the men’s dormitory is known for its shadow figures and disembodied voices. They are seen walking in and out of doorways, across halls, peeking from behind doors, and even seen crawling across the floor.

The solitary confinement location in the asylum is one of the more sinister in regards to hauntings. Iron brackets protrude out the stone walls in one small room, which was used to shackle ‘unruly’ inmates. The terrifying part of this is that it wasn’t criminals who were being confined there. Those with misunderstood mental illnesses and conditions such as Alzheimers, Tourettes, Aspergers, and even unruly wives were taken down to the darkness of the solitary confinement pits. Today, visitors feel nauseous when entering this area, and some have even reported being hit or pushed while in the solitary confinement cells.

An obvious spot for ghostly activity, the morgue is known for its disembodied voices and poltergeist activity, as well as a violent spirit who enjoys pushing visitors down onto the cold tile.

There remains countless theories as to why the Rolling Hills Asylum is so haunted. One is that this is the only home some of the residents ever knew — they have become attached to it. Some of them lost their parents, spouses, families, and built relationships with people at the asylum that meant more to then than what had come before. Many of the spirits at Rolling Hills considered it their home.

They felt safe here. Why would they ever want to leave? As for others, the negative attachment to the property through the pain and suffering they endured keeps them confined here, even after death. Whatever the reason may be, the spirits of Rolling Hills Asylum make their presence known time and time again, their memory living on in the stories that visitors and staff leave with.

For even more haunted asylums, check out our article on the infamous Trans-Allegheny Lunatic Asylum!