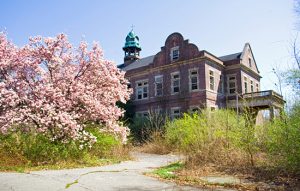 Pennhurst Asylum was once known as the Pennhurst State School, or the Eastern Pennsylvania State Institution for the Feeble-Minded and Epileptic — a name that truly shows its age. It was built to house people with physical and mental disabilities in Southeastern Pennsylvania. After 79 years of pure controversy, it finally closed its doors on December 9th, 1987. You may be wondering, what exactly happened at this infamous asylum to cause such drama and suffering over its almost century-long tenure? Read on to learn all the gritty details and find out what makes Pennhurst Asylum so haunted!

In 1903, a growing number of physically and mentally disabled people were in need of care and housing in the Spring City, Pennsylvania region. The Pennsylvania Legislature authorized the creation of the asylum that same year. More than 4,000 patients were in need of a proper care facility, and Pennhurst Asylum was intended to create a haven for these people and give them the specialized care they needed.

Two buildings were constructed, one was for the educational and industrial departments, the other was for the custodial and asylum department. The institution was required to house no less than 500 patients, or inmates as they were called, at a time.

From 1903 until 1908 the first buildings were being constructed on the 634-acre property. Dining halls, kitchens, store rooms, cottages, teacher’s homes, laundries, and power stations were also created alongside the main housing units. The Pennhurst Asylum campus is massive, a small city all on its own with over 30 buildings.

The buildings were designed by Phillip H. Johnson, had two stories, and were made of terracotta, granite, and red brick. They were all connected with fireproof tunnels and walkways used for transporting residents from building to building.

On November 23rd, 1908, ‘Patient Number 1’ was admitted to the hospital. Within four years, Pennhurst Asylum was overcrowded and under the pressure of the state to start admitting immigrants, orphans and even criminals, as prisons were also becoming too full.

In 1913, the knowledge and awareness of mental health disorders was highly misunderstood. State legislature declared that disabled people were unfit for citizenship and posed a menace to the peace, and thus recommended a program for custodial care. Furthermore, legislature desired preventing the ‘intermixing of genes’ of those at the asylum and the general population. Pennhurst’s Chief Physician quoted Henry H. Goddard, a eugenicist:

“Every feeble-minded person is a potential criminal. The general public, although more convinced today than ever before that it is a good thing to segregate the idiot or the distinct imbecile, they have not as yet been convinced as to the proper treatment of the defective delinquent, which is the brighter and more dangerous individual.”

A heartbreaking and completely irrational statement. The treatment of patients, especially those who had more severe disabilities were treated horrendously. Conditions at the asylum were finally exposed in 1968 when a local news station aired a five-part report on Pennhurst Asylum. Again, in 1981, a Time magazine article described Pennhurst as having a history of being understaffed, dirty, and violent. In 1983, nine asylum employees were indicted on charges of slapping and beating patients, including those in wheelchairs, and arranging for patients to fight one another.

On May 30th, 1974, a class action lawsuit was filed on behalf of the current and former residents of Pennhurst Aslyum. The lawsuit argued that patient rights were violated at Pennhurst and that those who caused their suffering should be held responsible.

After a 32-day trial, U.S. District Court Judge Raymond J. Broderick found that Pennhurst was indeed overcrowded, understaffed, and lacked the programs needed to care for residents. He found that various forms of restraints were used as a result of the lack of staff, including seclusion rooms, physical restraints, and even psychotropic drugs. The environment of the building was found to be hazardous, to the extent that it was ‘not only not conducive to learning new skills, but it is so poor that it contributes to losing skills already learned.” Residents were also found to have been abused by other residents and staff.

The reporters who first broke the story about Pennhurst were completely horrified by the conditions. Bill Baldini, the young reporter who headed the story, said:

“We started shooting, and my crew was mortified, I mean, I had trouble keeping them on the job, because they were literally getting sick from what they saw.” Children were tied to beds, residents were emaciated and naked. Wards of infants and children from the age of 6 months to 5 years were clustered together in metal cages. Some people were even left to lie in their own waste for days on end.

This abusive and negative energy left an imprint on Pennhurst and the land it sits on, and this is evidenced by the staggering amount of hauntings that are reported today.

Today, the building has bore witness to more than a few ghost hunting crews searching for answers and to communicate with the patients who never left the walls of the asylum. The sprawling network of buildings and tunnels were left abandoned, and tortured spirits grow restless within the confines of Pennhurst. Staff and caretakers of the property say that the buildings as well as the underground tunnel network and severely haunted by the spirits of the patients who suffered and died there. Reports of slamming doors, disembodied footsteps and voices, sounds of vomiting and crying are heard from seemingly empty rooms.

Some witnesses have even reported the apparition of a little girl roaming around the campus, looking perplexed and a bit lost. The sound of children playing and crying is also a common occurrence.

Most of the spirits at Pennhurst are believed to be friendly, just looking for someone living to communicate with, to tell their story. Reports of Satanic worship have come from the property, however.

A site of otherworldly urban decay, the asylum sits stagnant with twisting vines and roots weaving in and out of the buildings, and it almost seems as if nature is trying to reclaim these stones, to destroy the unnatural happenings that took place here. Inside these tombs are hallways filled with old laundry totes sagged with molded clothes and linens, layers of graffiti, rusted wheelchairs, and rain sneaking in.

Raw, negative emotions filled the halls of Pennhurst years ago, and most of that heaviness hasn’t left, it’s ingrained in the walls, the floors, the ceilings. Today, Pennhurst sits as a part haunted attraction-part memorial to the dead. It is hoped that we do not forget what happened here, as it is necessary to remember mistakes of the past to prevent them from happening in the future.

For more haunted asylums, check out our article on the Trans-Allegheny Lunatic Asylum!