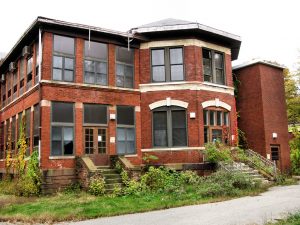 Also known as the Essex County Hospital Center, Overbrook Asylum was a psychiatric hospital that used to stand at 125 Fairview Avenue in the Township of Cedar Grove, New Jersey. It’s now off limits, dangerous, and reeks of nothing more than decay. So, why is this old hospital so intriguing? What is it about the dank and dismal halls that draws us in to investigate? It’s been said that ‘Hollywood would be hard-pressed to make a fake asylum as eerie at the Overbrook.’

In 1896, a large portion of land was purchased by the City of Newark to build a new hospital with hopes of relieving pressure in the overcrowded Newark Hospital. During the late 1800s and early 1900s, a handful of buildings were constructed that housed patients and other facilities like a laundromat, theater, and powerhouse.

The 325 acres chosen for the hospital were selected due to the remoteness and high altitude. These were believed to provide a healthy, peaceful setting for patients to rehabilitate in. The facility housed mentally ill patients who required daily care and looking-after.

In the early half of the twentieth century, Overbrook had already reached full capacity. By the time the 1940s and 1950s rolled around, thousands of patients were housed at the facility at any given time. The campus was so large that it even had its own train stop on the Caldwell Branch of the Erie Railroad. Patients were fed largely by food grown right on the hospital property, which they also worked as part of their rehabilitative therapy. Most asylums of the time followed this model of self-sufficiency.

A bakery and firehouse were built on the grounds, further cementing its strange status as a town within a town. It even had its own semi-professional baseball team that competed with teams from neighboring towns.

After the introduction of so-called ‘wonder-drugs’ for the treatment of brain disorders meant the deinstitutionalization of hundreds of patients in psychiatric centers across the nation. Gradually Overbrook lost its patient population and started its long decline into decay. By the mid 1920s, the tri-state Mental Correction Board bought the land and converted Overbrook into a mental health institution — the asylum lived on until its closure in the winter of 2007.

As one could only imagine, a century-long history has to come with happenings of tragic nature. On December 21st, 1917, the New York Times published an article that detailed the failure of a set of boilers during a cold wave in the area. This boiler failure resulted in the death of 24 patients in 20 days, these residents freezing to death one-by-one in their beds.

A quote from the newspaper truly captures the tragic spirit of the event.

“The 1,800 insane patients at the Essex County Hospital, at Cedar Grove, NJ, are suffering serious discomfort and in some cases incurring danger from the practically complete collapse of the heating and lighting plant of the institution. The sleeping quarters of the inmates are practically without heat, and have been so during the recent cold snap… the management of the institution has even been trying to borrow a locomotive from one of the railroads to furnish steam for heating and power. During the twenty days since the first of December there have been twenty-four deaths in the institution, as against eight for the entire month last year. There have also been thirty-two cases of frostbite in the last three weeks.”

Conditions started to become so bad at Overbrook during the cold snap that the hospital’s director sent a letter to families asking them to remove their loved ones from the facility until the issues were fixed.

In 1978 alone, there were over 150 reports of missing patients, one of whom wandered off, broke into a nearby home, took a carving knife and hammer and tried to abduct a woman while stealing her car. Other incidents of escaped patients tells that the care provided at Overbrook wasn’t up to the standards it should have been. Perhaps the overcrowding at the hospital caused these issues.

It;’s estimated that more than ten thousand people died during their stays at Overbrook — and some even believe that their tormented souls still wander around the festering building.

One urban explorer told of an experience he had at Overbrook when he was only 12 years old:

“He and a friend were on an upper floor of the abandoned asylum structure when they spotted a male figure ducking around the corner at the end of a long unlit corridor. They ran after the figure. Turning the corner, the only door there was for a restroom. When they entered it, there was nobody inside. Where did the figure go?”

The asylum has a certain mystique that surrounded it, and with more than 10,000 deaths associated with the property since its inception, it’s easy to see why. Some residents have actually had a hard time letting go of the abandoned asylum, taking keepsakes such as phones, woodwork, and even brass bells to their homes with them. Could Overbrook just have a certain hold over the people in the area?

Reports of strange apparitions have even come from the asylum before it was set to be torn down. A large, dark shadowy figure with a long torso and visible spine has been reported sneaking around the hallways of the hospital, darting in-and-out of patient rooms, when followed it simply disappears into the ether.

Other visitors and urban explorers have reported disembodied voices and unexplained footsteps.

The asylum was even featured on more than one televised ghost investigation show, such as Ghost Adventures and Ghost Hunters. Both teams claimed to have gathered evidence of spirits at the asylum, finding strange Satanic markings on the walls and recording voices stating ‘get out,’ and ‘help me.’

Since the asylum has since been demolished, reports of activity have dwindled. However, could the visitors to these parks have experiences with the energy tied to the land? Perhaps the homeowners buying the townhouses are experiencing ghostly events inside their newly built sanctums and just keeping hush hush about it. We’ll truly never know for sure, all we’re left with is the stories that have arisen of years gone by.

Today, the asylum is in ruins, torn down by the city and reincarnated as enormous piles of brick and wood where Overbrook once stood. Two parks were created on the property, County Hilltop Reservation and Cedar Grove Park. Plans for new luxury homes and townhouses being built on the site pop up every year, but as of now only the memory of the asylum and its underground tunnels remain, at least until Mother Nature reclaims her land.