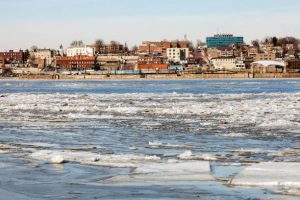 Alton State Mental Hospital is one of history’s only mental hospitals from the early 1900s that’s still in operation today. As with other haunted asylums we’ve covered, the patients of the Alton State Hospital were subjected to cruel and inhumane ‘treatments’ under the guise of medical progress. Patients unlucky enough to land within its thick walls found themselves victim to the abuse that Alton State Hospital was famous for.

In the autumn of 1912, the State Board of Administration, along with State Architext W. Carbys Zimmerman, visited upper Alton to find a site to build the new hospital for the ‘insane’ and to relieve overcrowding in other hospitals.

In 1913, Senator Edmond Beall introduced a bill in the Legislature for $500,000 to start construction on the hospital. By July of that same year, land was purchased from William Cartwright, Edward Rogers, Colonel Andrew Rodgers and Harriet Kirkpatrick. The purchase included farmhouses and existing buildings.

Frank Dinges was appointed to be the site manager. Just a year later, problems arose between some politicians in Chicago that wanted the state hospital to be built closer to the city center. There were difficulties with roadways, utilities, and transportation to the hospital that Alton officials claimed to be unaware of. Eventually, in March of 1914, cattle and other livestock started to arrive at the property. By 1915, work began on the hospital itself and even though it had not officially opened its doors the the public, small numbers of patients began to arrive on site as well. By October, five hospital buildings were completed but not fully utilized.

In October of 1916, underground passageways ran under the hospital site, high enough for people to walk in, and each had electrical wiring running through them. The smokestack for the powerhouse was also completed that same year.

Finally, by 1917, the hospital was ready to welcome in patients from other hospitals. Dr. George Zeller, previously from the Peoria Insane Hospital, became Alton State’s new superintendent. He was a pioneer in mental health and was credited with starting the movement that resulted in occupational therapy as a treatment for various mental health disorders. He believed strongly in the ‘non-restraint’ policy, stating that caging patients did not heal them, and believed that they should be free to roam as they please. No locks or bars existed on the doors or windows.

Unfortunately, the policy started to trouble farmers on neighboring properties, as patients began to ‘escape’ the hospital and roam on other properties, frightening children and residents. In 1922, hospital patients were even blamed for the burning of the Culp School.

Like many other hospitals of the time, the hospital was also a working farm. It was believed that the work and responsibility was necessary in the treatment of mental health crises. Alton State Hospital became well known for its gorgeous grounds. Patients were allowed to care for the cattle and other animals and plants which included a well-stocked fish pond, apple orchard, and even tobacco crops. One patient even grew peanuts which they then sold in Upper Alton.

In 1918, the hospital recognized the need for an attached cemetery for those who died and were unknown or unclaimed. Later, the hospital was even used to house shell-shocked soldiers coming home from the horrors of WWI.

In 1921, Dr. Zeller resigned his position at Alton State and returned to Peoria State Hospital where he found mass amounts of neglect. He checked himself into the hospital for three days, living in a different ward every night. His experience was so profound that he ordered that every member of the staff live life at the hospital as an ‘inmate,’ as they were once called. He stepped down as hospital administration in 1935 and passed away on June 29th, 1938.

The death of Dr. Zeller removed a distinguished part of the community for the improvement of the care of the mentally ill. His belief in lockless units and a zero-restraint policy removed the stigma of those with mental illnesses, and found other treatments that became more successful, such as occupational therapy.

By the 1940s, hydrotherapy and electro-convulsive therapy were introduced at the hospital. By this time, the hospital had 757 patients, with over 65,000 hours of hydrotherapy being performed in one year. By 1959, the patient population was at 1,775 with a hospital capacity of only 1,084. With overcrowding came issues of abuse and neglect. The hospital started to see lobotomies as well.

The Department of Mental Health assumed control of the hospital in 1961 and changed its name to Alton Mental Health Center in 1975. It is primarily a forensic services provider, with about 200 court-ordered patients living there. A high-security building was completed in 1997 — a stark difference from the free-range that patients of Alton’s past with Dr. Zeller were accustomed to.

As with any hospital, death and sorrow ran deep within the veins of Alton State Hospital. The energy felt here by the patients has stuck around, and the energies of former patients is a key ingredient for souls refusing to give up contact with the physical world. Today, staff at the current Alton Mental Health Center have had some of the strangest experiences of all.

Alton State Hospital earned a reputation for mistreating patients, subjecting them to crude treatments that sometimes lasted hours or days. Considered cutting edge treatment at the time, would be labeled as torture today.

Staff and visitors report hearing unusual sounds, disembodied voices, slamming doors, and nurses on duty report hearing a quiet voice that asks ‘who is that?’

Others report the sensation of being touched, and one photo even showed a bright orb with a vision of a man’s face in agony.

While the facility is still operational today, ghost investigators who manage to visit are told by spirits to get out, promptly being pushed out of the room.

Alton is considered one of the most haunted small towns in America. Its sordid past of tragedy, murder and death have led to Alton’s extremely haunted present. Several locations in Alton are said to be haunted, including the infamous McPike Mansion, The First Unitarian Church, and the Milton School. The city itself has even been featured in countless articles and TV shows and Mark Twain once referred to Alton, Illinois as a ‘dismal little river town.’

It’s no surprise that one of Illinois’ most haunted hospitals in located in one of America’s most haunted ‘small towns.’ Alton has seen the likes of Civil War battles, and was even an integral part of the Underground Railroad. Alton State Hospital offers just a glimpse of the hauntings that Alton has to offer. Have you ever visited Alton or Alton State Hospital? Did you have any strange experiences while visiting the town or the facility? If visiting these haunted sites just isn’t for you, perhaps a further read on other haunted hospitals across the United States is right for you — check out our article about Linda Vista Community Hospital!

Or, if a hands-on experience is more up your alley, book a ghost tour with us at our website here! You’ll experience some of America’s most haunted locations in a way you’ve never before.