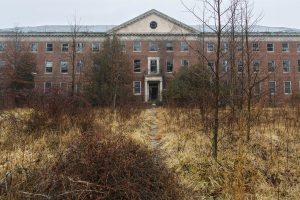 Many asylums like Forest Haven Asylum take on a feeling of death and malevolence once they start their decay process. What once was meant to be a beacon of hope and healing turns into something of a hellish nature. As for Forest Haven, it was never a ‘good’ place — its long history of death and cruelty occurred long before it ever shut its doors to the public.

Opening in 1925 to serve the residents of the District of Columbia, Forest Haven was once a promise a progress and hope in treating children who were handicapped or mentally ill. With over 30 buildings on its campus, the ‘inmates’ as they were called then, were taught valuable job skills in a communal farm colony environment that provided an empowering sense of community and training. This thing of beauty only lasted for a couple of decades and in the years that followed, Forest Haven Asylum took a turn for the absolute worst.

A History of the Haven

Forest Haven was a live-in facility for children and adults with intellectual or physical disabilities. Located in Laurel, Maryland, it was meant to serve the residents of the surrounding area and D.C.

Forest Haven Asylum encompassed nearly 300 acres and at its height it housed over 1,000 patients. Its decline began in the 1960s as funding was cut and the population began to include people with non-intellectual disabilities such as epilepsy. In 1974, Forest Haven took in individuals from a nearby orphanage and a lawsuit followed in 1976. Families of patients pushed for residents to join group homes, and they did — but the facility continued to operate and even allowed a physician with a suspended medical license to continue practicing there.

Some sort of justice finally came between 1981 and 1991 prior to the closure of the facility. The Justice Department began monitoring deaths from aspiration pneumonia, which comes as a result of improper feeding procedures. There were also accounts of rampant physical, sexual and mental abuse at the facility.

Today, the site is abandoned but cared for by the United States Park Police. It remains a popular attraction for urban explorers. Hazards such as asbestos have been removed, but the hospital equipment, desks, beds, toys, and other medical records remain to tell the story of what occurred there.

By the 1960s as funds dried up, the asylum started to embody the effects. Recreational programs were discontinued, staff was reduced and replaced by unqualified employees, and as the years went by things got progressively worse. Forest Haven quickly grew beyond its means and many residents spent their days pacing their empty rooms.

“Workers here – because of frustration and lack of help – tend to abuse residents, of all of our residents, I’d add, some 400 don’t belong here. In many incidents, the facility is contributing to the handicap of retardation.”

Doctors, nurses, and caregivers began to take our their frustrations on the patients, many of whom were abused physically and sexually. This was truly the only attention that patients received, as many began to die due to neglect. The dead would be passed through the basement morgue and eventually buried in an unmarked field nearby. Hundreds of patients died at Forest Haven, and due to one report, some were even subjects to medical experimentation.

Prior residents have been reported as being hit with belts, switches and baseball bats. Missing teeth and other dental issues were commonly reported. Many of the residents who died and taken to the field were not given a proper burial, but actually put into a mass grave, with only one headstone erected by the families saying that 389 patients lie below. Some of these graves have even been uncovered due to erosion in the area.

Mayor Vincent Gray, the director of the D.C. Department of Human Services at the time told of one memory he just could not forget:

“The place was inhumane. It was a very negative experience,” Gray told the Washington Examiner, adding that his most “vivid memory” of Forest Haven was seeing nude residents paraded outdoors to be hosed down by staff members.

With all of this being shared, it’s no wonder that the tortured souls of patients of the past still remain at the facility, wandering the grounds and keeping to their rooms and routines. As the site of one of the top 10 worst cases of institutional abuse in United States History, Forest Haven Asylum was all but a sanctuary for the people who lived and died there.

These days, there’s a huge granite marker with names of the dead in what is now known as the ‘Garden of Eternal Rest,’ however, the spirits at Forest Haven are not resting.

Visitors to the facility tell of orbs and apparitions, disembodied yelling and groans, and even being touched by unseen, cold hands. The Garden of Eternal Rest is the most active, with colorful orbs flitting about the area and an overall feeling of dread overcoming those who step foot onto the mass grave.

The earthly possessions of patients from the past seem to be attaching them to this land, with their suitcases being some of the mot polarizing. These were packed with the worldly possessions of former ‘inmates,’ a story of who they were, what they deemed important — a teddy bear, a family photo. Do their bodies remain in the garden?

A small, bronze plaque at the entryway to the administration building reads:

“Yet while I live, let me not live in vain.”

A chillingly untrue sentiment for those who spent their years at the hell hole known as Forest Haven. The buildings at Forest Haven Asylum still stand today, a representation of what a haven is not. A single headstone erected in a field to honor hundreds of souls who endured the suffering and abuse of this place. The decaying remains of the asylum tell us a story of the past at Forest Haven — what was once a hopeful sprawl of farmland and hope quickly devolved into a dismal and dark existence, one that this land will never be able to shake.

The buildings at Forest Haven are heavily patrolled and off limits, and it is not recommended that you explore them. Looking to learn more about abandoned hospitals and mental asylums all across America? Check out our blog!