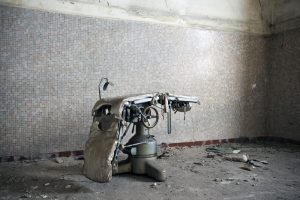 Take yourself back to 1826 in Verona, New Jersey. A new sanitarium is needed to house the city’s population of mentally ill patients. The county purchased 325 acres of farmland right on the border of Verona and Cedar Grove to establish the Essex County Asylum for the Insane as it was known at that time. Soon after would come the Essex Mountain Sanitarium.

Upon opening, the facility soon became known as the Overbrook due to its foreboding position over the Peckman River. Other buildings were quickly constructed as part of the Overbrook campus on Fairview Avenue, which was then only a glorified dirt path that served as the main street.

Just up the road is where the Newark City Sanitarium stands. On the border of Caldwell and North Caldwell, this facility was created to house the growing number of patients suffering from tuberculosis at the time. It soon became known as the Hilltop, another nod to the high positioning of the sister sanatoriums.

After antibiotics and advancements in medicine made tuberculosis an easily-treatable ailment, the number of patients at the Sanitarium decreased, and eventually it was left empty for decades. It was during those years that the true history and rumors started to spread across the hillsides, telling of medieval torture devices, outdated surgical practices, and abuse.

History of the Sanitarium

The history of the sanitarium starts with the Newark City Home, which was established on the property that is today the grounds of Verona High School. The purpose of the home was to reform the misbehaved children of Newark and to serve as an orphanage. On January 9th, 1900, the main building of the home was destroyed by fire. A train passed in the distance, sounding its horn to warn residents of the burning building. Fortunately, there were no casualties in the blaze.

After the fire, trustees decided that a change was needed. They adopted a ‘cottage system’ in which boys and girls were separated and grouped into ‘families.’ Each of these ‘families’ consisted of over 50 kids. Under the new system, a separate cottage needed building for the girls to live in.

Just over a quarter-mile from the boy’s cottage, the new cottage was built. It was opened in January of 1902 and just four years later after decreasing enrollment, the cottage soon stood vacant. That all changed in 1906 when there were 3,000 cases of tuberculosis in the city of Newark, with 842 deaths from the illness. Without adequate accommodations for patients with tuberculosis, the Board of Health had to struggle to cope unless proper facilities were established.

Through the efforts of Mrs. E.A. Prieth and Miss Mary Wilson, a proposal was brought to the table to turn the vacant girl’s cottage into a sanitarium. The plan drew strong objection from the citizens in the area, and a campaign was started to keep the sanitarium out.

Before any direct action was taken by protesters, the first few patients were admitted into the building under the cover of a grey November day in 1907. To evict the patients and physician would require an immense amount of court proceedings and of course, these were never pursued.

Over the next decade, tuberculosis cases were rising and soon the old girl’s cottage wasn’t large enough to house all of the patients. The girl’s cottage, now a hospital, was acquired by the Board of Chosen Freeholders and it was enlarged to handle the needs of the 4,012 people suffering with tuberculosis in the county’s 21 communities. Eleven new buildings were added and were opened in 1922.

Construction continued, and the last major building erected was the Hospital Building, completed in 1930. The patients living at the former girl’s cottage were moved and it was changed into the Administration Building.

The grounds of the property also grew from 32 acres to nearly 200, with functional farmlands being worked by prisoners of the nearby penitentiary. The hospital was considered top-notch, one of the finest treatment centers of its time. Surely, it was. As with all asylums, overcrowding and hushed mistreatment were far too common.

After medical advancement, the tuberculosis hospitals across America were made useless, and most were left to rot in the natural environments they sat in.

Abuse at the Hospital

With its age, its no wonder that this location is abound with stories of ghostly happenings as talk of its questionable past surfaces. Think electroshock therapies, frontal lobotomies, and physical beatings. Of course, thousands of people are reported to have died on the property, a reason for hauntings in and of itself.

Hauntings of the Essex County Sanitarium

Tales of escaped patients returning to the premises to roam the underground tunnels connecting the buildings have been told. People reported that the ghosts of children who passed away at the property wander about the third floor of the building specifically. Apparitions are reported, appearing seemingly out of nowhere. People claim to hear disembodied footsteps and have even watched abandoned medical equipment such as wheelchairs move on their own.

A local band was at the property to take photographs one day for their album. Upon further inspection, a strange mist had developed in only one of the images. It showed what looked to be the screaming face of a young woman. Other urban explorers and visitors to the property have reported feelings of uneasiness and fear, especially in the chapel.

Several other visitors have reported hearing an unnerving squealing coming from the trees on the property, almost as if the land itself is screaming. An apparition of a tall shadowy figure is also reported to yell at visitors, telling them to ‘get the hell out of here!’

One explorer told of their visit to the Essex County Sanitarium. It went a bit like this:

All of a sudden I began to feel very vulnerable. I froze for a moment. Then I heard my father’s voice inside my head, coming to me from when I was young and used to explore the forgotten corners of my hometown. “Someday,” he had said, “you’re going to disappear in one of those places, and no one is ever going to know what happened to you.” A shiver ran the length of my spine as I stood there in the diminishing light and realized that he might have been on to something there. I hadn’t told anybody where I was going when I’d set out for this place, and if in fact I did disappear, this was certainly not the first place that I would be looked for. I did not know who, or what, might call this dank place home. What if the lunatics had indeed taken over the asylum, as the rumors of the place had alleged? I decided to cut my visit short and get back out into what remained of the day’s sunlight.

What remains of this once populated hospital is nothing but derelict buildings and abandoned medical equipment. Hospital beds, gurneys and wheelchairs are strewn about the building, giving visitors a spooky glimpse into a time that no longer exists. Obvious vandalism covers the buildings, evidence of bored kids visiting, looking to find a cheap thrill.

But to the patients who resided here, this was home. This was a place that was supposed to heal them, some of which had their expectations exceeded, while others fell victim to the throes of overcrowding and mistreatment at the hands of those supposed to care for them.

Dim hospital corridors coax visitors deeper and deeper into the bowels of the hospital, where plaster and paint are peeling, cool, damp air fills the lungs of those who enter, and the walls of the building lie in powdery piles against the baseboards.

For another read on a better-known haunted hospital, check out our article about Ohio’s Molly Stark Sanatorium.