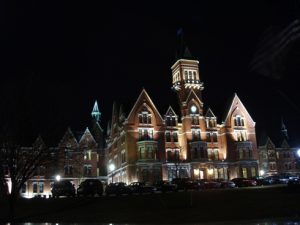 The Danvers State Hospital, also known by the name Danvers State Lunatic Asylum is truly one of the most picturesque of the historic mental hospitals, and truly goes to show the amount of architectural prowess that went into creating these massive structures and campuses. Built in 1874, it was created purposefully on an isolated site in rural Massachusetts.

As with many asylums of its time, it was constructed according to the Kirkbride plan and boasted multiple acres of self-sustaining farms and gardens. Despite its status on the National Register of Historic Places, the majority of the building was demolished in 2007. This doesn’t stop its many hauntings, however, and the spirits of Danvers past are sure to make themselves known to this day.

After four years of construction, the Danvers State Hospital was officially opened in 1878. Nathaniel Jeremiah Bradlee was the designing architect, and he created the hospital at a whopping $1.5 million dollars at the time. The hospital consisted of two main central buildings which housed administration with four wings branching off from each side. The kitchen, laundry, chapel, and dorms were in a connecting building. A nearby pond supplied the hospital with its water.

In the wings, male and female patients were separated with the most hostile patients in the outermost wards. Most of the buildings on the Danvers campus were connected by a labyrinth of tunnels. Many institutions of this kind were constructed with tunnels so that they could be self-sufficient in wintertime. Others believe the main purpose of the tunnels was to transport bodies of those that passed away without negatively affecting the morale of other patients.

The original design was meant to house 500 patients with extra ‘attic’ space to house 1,000 more. By the late 1930s and 1940s, more than 2,000 patients were being treated at the facility and the overcrowding was severe. People were even being held in the basements of the building. Like many other mental health institutions at the time, Danvers State Hospital used various inhumane treatments such as shock therapy, lobotomies and straitjackets. These were used to keep the crowds controlled, which sparked more than just a bit of controversy. During the 1960s as a result of increased emphasis on alternative methods of treatment, community-based mental health care, and deinstitutionalization. As a result, the population started to decrease.

Massive budget cuts in the late 1960s played a huge role in the closing of Danvers. The hospital began to close its wards by 1969, and by 1985 most of the original hospital wards were abandoned. The entire campus was closed for good on June 24th of 1992. All patients were transferred to the community or to other nearby facilities.

In 2005, the property was sold to AvalonBay Communities and was destined to become a residential apartment development. A lawsuit was filed by a local preservation fund to save the hospital, which was listed on the National Register of Historic Places. This didn’t stop the process, and the demolition of most of the buildings began in 2006. By June, most of the structures were gone. The spirits of Danvers were essentially homeless, at this point, and the land was all they had left.

A Fire at Avalon Bay

On April 7th, 2007, the ghosts of Danvers burned down in a large fire that was visible all the way from Boston, nearly 17 miles away. Damage was intense, leaving just the brick shells of the buildings. Richard Trask of the Danvers Archival Center wrote this about the state’s failure to preserve the campus:

‘The failure to protect and adaptively reuse this grand exterior is a monumental blot in the annals of Massachusetts preservation. What might have been a dignified transformation of a magnificent structure which was originally built to serve the best intentions, but at times lost its way through human frailty, now is a mere ghost-image of itself. And we and our progeny are the losers’

Connection to the Salem Witch Trials

On a more terrifying note, the judge that presided over the Salem Witch Trials, John Hathorne, lived on the land that Danvers was built upon a few hundred years ago. Perhaps the dark history of the land is what caused Danvers State Hospital to become such a dark and infamous place.

For more about the Salem Witch Trials and the tragedies that occurred during that time, check out our article about the happenings at Procter’s Ledge.

Danvers State Hospital started off on a good note, but over its lifetime the overcrowding issues began to create problem within the walls of the facility. Patients walked the halls naked, they lived in their own filth from a lack of basic hygiene, symptoms were getting worse and people were not being cured. Shock therapy and straitjackets became the norm at the hospital. Electroshock therapy scared patients, and they submitted. When they ‘misbehaved’ they were put into straitjackets and left to be forgotten.

When shock therapy failed to control the population, lobotomies started. In 1939, the population of the hospital swelled to 2,360. A total of 278 people died at the hospital that very same year. Neurology experts often call Danvers the ‘birthplace of the prefrontal lobotomy.’ Visitors to the hospital during these years reported lobotomy patients wandering aimlessly, staring blankly, unaware of who they were or what they were. They existing in a hellish daze, unable to leave.

During the 1980s, reports began to filter out of the hospital about missing teenage patients. One account states that an upwards of 115 patients had disappeared within just three months. The hospital never spoke about it publicly because their closure was imminent. When staff was questioned about where the patients were going, the only answer was ‘these patients had been assigned to a new doctor.’

The missing patients of Danvers were never found, and it remains a mystery to this day what had actually happened to them. No bodies were recovered and staff of Danvers remained tight-lipped throughout their closure, if they had known any details at all.

With such sadness, neglect, abuse, and trauma comes a staining of the land. From the involvement with the Salem Witch Trials to the horrors that occurred at Danvers, the land that the hospital was on is truly one of the most haunted.

The only remnants of the horrid practices here are two cemeteries, filled with 770 bodies. Some headstones only have numbers as opposed to names. Even in death, administrators at Danvers State Hospital did not dignify their patients. Visitors to the property report screaming, banging, and crying. The cemeteries are also hotbeds of paranormal activity, in which apparitions are commonplace and disembodied voices are the only sound.

Visitors often report seeing deep black shadows, flitting about the property. Others see grey-ish mists, moving slowly around, following people who come to the site. Could these be the dazed spirits of the lobotomy patients that died here?

With a nickname like Hell House on the Hill, and the inspiration for Arkham Asylum, Danvers State Hospital is one of Massachusetts’ most haunted, that’s for sure. Have you ever visited the Danvers site? Did you experience any strange happenings?

Check out our article on Athens Mental Hospital!