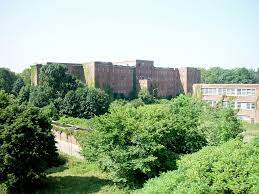 The Byberry Asylum in Philadelphia, Pennsylvania, practically tortured its patients with no consequences for eighty years until it was shut down in 1990. A 1946 LIFE Magazine expose of the facility stated this horrifying description:

“Thousands spend their days – often for weeks at a stretch – locked in devices euphemistically called ‘restraints’: thick leather handcuffs, great canvas camisoles, ‘muffs,’ ‘mitts,’ wristlets, locks and straps and restraining sheets. Hundreds are confined in ‘lodges’ – bare, bed-less rooms reeking with filth and feces – by day lit only through half-inch holes in steel-plated windows, by night merely black tombs in which the cries of the insane echo unheard from the peeling plaster of the walls.”

Officially known as the Philadelphia State Hospital, Byberry Mental Health Hospital’s main legacy is its abuse. It started as any other old-time asylum, a working farm modeled to provide patients with independence and a place to heal. Eventually, also as asylums of those days tended to do, the Byberry complex grew into a multi-building campus and became overcrowded. It grew so fast that it couldn’t keep enough staff to properly manage the patients and facility.

Soon the administration of Byberry was allowing people to work at the facility with no qualifications or training. If someone was seeking a job, regardless of their status, they had one at Byberry. During this time, close to 3,000 people who chose not to fight in WWII for religious reasons were sent to work at mental health facilities around the country. It was mostly due to their reports and photographs that the inhumane conditions at Byberry were finally brought into the light.

To see other haunts of Philly for yourself, join us for a Philadelphia ghost tour and experience the darker side of Philly like never before.

Horrors at the Hospital

Due to understaffing, there was a ridiculously low ratio of nurses to patients. Because of this, most patients were left unbathed and naked for weeks at a time. Housekeeping also fell behind and patient bedding went unwashed, the floors of the facility were sticky with urine. Instead of tending to the patients in their care, much of the staff just resorted to placing patients in restraints – sometimes for months on end.

Even as recently as the 1980s, a 27-year-old resident named William was left in such restraints for more than 14 months, and possibly for as long as three years. Imagine being tied to a bed for three years, dirty and starving.

Help came for William in the form of his lawyer Stephen Gold, who stated that ‘he was much better when he went in there seven or eight years ago.’ Byberry was found to be infringing on William’s rights and his release was demanded.

By 1970, there were at least 57 reported deaths at the hospital. The kicker? They were all attributed solely to patient neglect.

Byberry’s open-door policy also caused some issues in the community. What was meant to be a reward for high-functioning patients and good behavior ended up resulting in the deaths of a few residents. Homeowners in the area sometimes awoke to patients sleeping on their lawns. Other times, patients who wandered off from the hospital ended up committing suicide after rethinking their decision to leave. One patient even wandered off in the midst of winter, and when he was unable to locate any staff to help him find his way back to the hospital, he died of exposure.

Byberry even has a special ‘cure’ they used on patients. A newspaper article from the Philadelphia Record tells of Byberry’s infamous ‘Water Cure’

“[An attendant] soaked a large towel in water. After wringing it out, he clamped the towel around the patient’s neck. The attendant pulled the ends together, and began to twist. First he tightened the noose. Then he gave the towel a slow turn to let the patient know what was in store for him. The patient begged for mercy. But the twisting continued. The patient’s eyes bulged, his tongue swelled, his breathing labored. At length, his body fell back on the bed. His face was a dreadful white, and he did not appear to be breathing. Fifteen minutes elapsed before he showed signs of returning to life. The patient was ‘subdued’.

Many other tortures and beatings given by the staff at Byberry likely went unnoticed or ignored. One staff member reported that other nurses would use caution when using weapons or fists upon patients.

Ironically, some of the most horrifc abuse came during ‘treatments’ at the facility. Doctors were pulling teeth without numbing as well as performing other surgeries and procedures without painkillers – but why?

Larry Real, a psychiatrist who trained at the Byberry Hospital in the 1970s told of a staff member giving a patient stitches without any painkillers. The doctor had been taught that people with schizophrenia don’t feel pain, and therefore do not need medicine.

With the underuse of painkillers when necessary came the contrast of overuse of painkillers as an experiment. The pharmaceutical company called Smith-Kline French opened a lab inside of Byberry and did extensive and morally questionable testing on the patients at the hospital. Unable to consent, patients were coerced into volunteering for these clinical trials and hundreds died as a result.

The abuse took a more sinister turn when two orderlies murdered a patient. In 1919, they confessed that they strangled him until his eyes literally popped out. They blamed their actions on untreated PTSD from their time served in WWI. They were never prosecuted, and even received a pay raise.

On top of staff murders, patients killed other patients routinely at the facility. Byberry housed many criminals sent there to undergo ‘psychiatric testing’ instead of serving prison time. Murders, rapes, and assaults were abound at the facility. One female patient was raped and killed on the property and her body was only discovered after staff found other residents carrying her teeth around.

Two more bodies were found on the hospital grounds in 1989, one of which had been missing for close to five months. It seems as if patients who went missing were just forgotten about, our of sight out of mind.

Finally, decades of reports swirled high enough to cause a shut down of the facility on June 21st, 1990. As early as 1946, LIFE Magazine was publishing photos taken inside the hospital showing the conditions. Author Albert Deutsch wrote this about his tour of the facility:

“As I passed through some of Byberry’s wards, I was reminded of the pictures of the Nazi concentration camps. I entered a building swarming with naked humans herded like cattle and treated with less concern, pervaded by a fetid odor so heavy, so nauseating, that the stench seemed to have almost a physical existence of its own.”

Hauntings of the Past at Byberry

Byberry is home to more than just a decaying structure surrounded by fences. Urban explorers and visitors to what remains of the facility report an indescribable heaviness that lays over the campus. The land has been stained by the abuse, and the spirits of patients who lost their lives here remain.

Apparitions of human figures are reported wandering into and out of the woods by investigators. Sometimes, blood-curdling screams echo from the rotting structure. Others report the constant feeling of being watched, floating white orbs, and the feeling of being followed as their make their way around the facility.

Byberry refuses to let visitors forget about the horrors that happened there.

Memories of the atrocities that occurred at the facility are retold by survivors of Byberry. It’s easy to forget that these abuses were occurring up until just 30 years ago. Now abandoned, the facility sits rotting, as it should have been years ago before it claimed the lives of so many people who came through its doors with hopes of a better life.

To learn more about other haunted asylums, check out our article on Ohio’s Athens Mental Hospital.