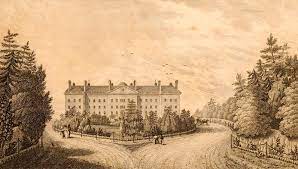 A private hospital meant to care for the mentally-ill of the Manhattan region, Bloomingdale Insane Asylum was founded by New York Hospital in 1821. The road from the asylum was called Bloomingdale Road in the nineteenth century and is now called Broadway.

The Bloomingdale Insane Asylum faced contoversy during its history, including reports of abuse witnessed by undercover investigators. Medically ‘sane’ patients were even kept at the asylum, a true testament to the ignorance and lack of attention provided at the asylum. To truly understand the past of the facility, we need to delve into the details of its history.

The History of the Bloomingdale Insane Asylum

The Bloomingdale Asylum was proposed by a man named Dr. Peter Middleton of Columbia College. It was brought up in an address spoken on a fall day in November of 1769 when Dr. Middleton stated that:

“The necessity and usefulness of a public Infirmary has been so warmly and pathetically set forth in a discourse delivered by Dr. Samuel Bard, at the college commencement, in May last, that his Excellency, Sir Henry Moore immediately set on foot a subscription for that purpose to which himself and most of the gentlemen present liberally contributed.”

Other funds were quickly added, and after some petitioning Drs. Peter Middleton, John Jones, and Samuel Bard were able to get their petition granted for the incorporation of a new public hospital on June 13th, 1771.

Between 1816 and 1818, the Society of the New York Hospital bought up twenty-six acres of land on which to build the asylum. They chose this land in upper Manhattan due to its farm-like qualities. In 1821, the asylum was ready to welcome patients in.

The hospital continually grew, adding new buildings for extra beds and expansions to add to the comfort of the residents. At the time, it was the only asylum that was operating in the state to care for mentally-ill people. Sadly, the asylum wouldn’t stay accessible to everyone who needed care.

In 1841, poorer patients were moved to the New York City Lunatic Asylum on Roosevelt Island. The Bloomingdale Asylum then became the exclusive asylum, who only housed patients whose families could afford their care. Two new buildings were added in 1829 and the campus continued to expand for decades after.

The grounds of the picturesque asylum were gorgeous, with walkways and gardens. Farming and gardening were considered therapeutic so of course, there was a working farm with barns, pastures, vegetable gardens and orchards. The asylum housed 120 patients and the expansion in 1829 was meant for violent male and female residents, with barred windows and extra security.

All wasn’t billy goats and sweet apples at the asylum, and in 1872 a New York journalist got himself committed to the asylum to see what patients were dealing with on a day to day basis.

According to Columbia University libraries, a patient could be admitted to the asylum against their will in the 1850s. Some true stories even ring out from the past, like that of Caroline Underhill who was forcibly committed by her nephew and sister. Commodore Richard W. Meade, the brother of Gettysburg war hero General George Meade, was even committed after he didn’t approve of his daughter’s wedding. A woman was committed because she witnessed her husband having an affair. He only ‘allowed’ her ever to be released when she promised not to bring it up again.

‘Wealthy people would send their family there because it had such a good reputation,” Mackin said. “It was not uncommon, if a wealthy husband wanted to get rid of his wife, he paid a lot of money to get a doctor to sign and put her away for ‘mental health reasons’.

After reports of abuse started to spill from the tight seams and lips of the hospital and its staff, reporter Julius Chambers when undercover and entered the asylum as a patient on August 12th, 1872. He published his findings and in one of his articles named ‘Among the Maniacs,’ he told of his harrowing experience:

‘A night of horror among raving patients—sleep disturbed by agonized cries of the dangerous idiots—close cells, uncomfortable beds and chairs, scanty and foul food, filthy baths, and rude and vulgar attendants—no amusements, games, or reading matter—imbecile boys exposed naked to the sun, and venerable blind men beaten by enraged keepers.‘

He also stated that once he moved to the main building, his living conditions improved drastically, showing that the asylum was ‘caring’ for more violent patients with less attention and empathy.

Patients were often strangled, kicked, beat, and abused. One patient even had his skull broken. Many patients ended up committing suicide inside of the asylum, and Chambers believed it was due to the abuse and neglect.

Hauntings of the Bloomingdale Insane Asylum

One particularly disturbing report is that of a doll named Missy. In the late 1800s, a young girl named Jane Bielawski got a little doll as a gift which she promptly named ‘Missy.’

After the doll’s arrival in her life, Jane’s friends began to die under mysterious circumstances. When investigations were carried out, the only person present at the times of the murders was young Jane. When authorities tried to interview Jane, she went into a fit of rage, swearing it was Missy who murdered her friends. Jane was eventually committed to the Bloomingdale Asylum. She remained there until her death in 1968. Even as an old woman, she swore it was her doll that was the culprit.

While only one building of the original asylum remains, Macy Villa, the land itself is reportedly haunted by the earth-dwelling spirits of the asylum’s past. Other parts of the asylum that still exist are underground in the form of tunnels. While these tunnels were used to carry pipes and cables, legend tells that state patients were locked down there for misbehaving. Macy Villa was the last building constructed on campus and was used the house the richest male patients so that they could be treated in ‘home-like’ surroundings.

As far as hauntings go, visitors to the area report extreme temperature drops as they near the remaining structure. It’s almost as if the spirits are truly trapped inside the building, unable to walk even 10 feet out of the building. Others have reported apparitions and disembodied moans echoing from the building and the surrounding land.

Some have even been touched or forcibly pushed on their way to leave the asylum grounds, like the spirits here are really saying ‘get out!’

Other parts of the asylum that still exist are underground in the form of tunnels. While these tunnels were used to carry pipes and cables, legend tells that state patients were locked down there for misbehaving.