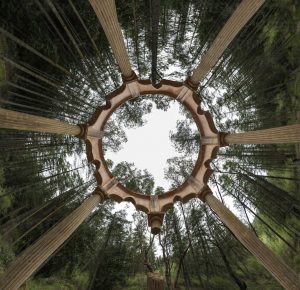 A monument straight out of a J.R.R.Tolkien film, Afterglow Vista is a stunning symbolic mausoleum that holds the remains of the McMillin family. It oozes Masonic symbolism and is nestled up on the edge of the Roche Harbor Cemetery on San Juan Island in Washington state. The mausoleum is a truly impressive sight not only to architectural junkies but paranormal investigators as well due to the strange light show that occurs at the tomb.

To truly understand Afterglow Vista, you need to understand the McMillins. Patriarch John McMillin owned the lime works in Roche Harbor and was very active in both local and state politics through the late 19th and early 20th centuries. He even considered Theodore Roosevelt a friend and colleague.

John wasn’t solely responsible for the founding of Roche Harbor, but he sure played a significant role. He earned his wealth from nearby limestone deposits that created the lime needed for cement, steel, fertilizer, and other products. He was a Freemason, a proud father, as well as an Elk and Knight Templar. Taking all of this to heart, one can begin to understand the significance of the monument and the heartfelt meaning behind each piece.

To quote from an informational sign at the monument:

“The structure is approached by two sets of stairs, representing the steps within the Masonic Order. The stairs on the east side of the mausoleum stand for the spiritual life of man. The winding in the path symbolizes that the future cannot be seen. The stairs were built in sets of three, five and seven. This represents the three stages of life (youth, manhood, age), the five orders of architecture (Tuscan, Doric, Iconic, Corinthian, Composite), the five senses, and the seven liberal arts and sciences (grammar, rhetoric, logic, arithmetic, geometry, music, astronomy). The columns were created to be the same size as those in King Solomon’s temple. The broken column represents the broken column of life-that man dies before his work is completed. The center of the mausoleum boasts the round table of limestone and concrete surrounded by six stone and concrete chairs. The chair bases are crypts for the ashes of the family, while the whole represents their reunion after death.”

He attributed his success to his Methodist religion, personal philosophies, and family. He wanted to immortalize this in a grand way, and successfully did so when he built the McMillin family mausoleum, or Afterglow Vista, in 1936.

A Visit to Afterglow

The trail leading up to the monument is short, but winds around a cemetery filled with little gravestones marked with Japanese names. Many of the workers that McMillin hired were of Japanese origin, so it’s almost as if he included them in the tomb itself.

As guests approach the monument, there are three flights of stairs to be climbed. The first flight has three steps and represents the three ages of man. The second flight has five, which represents the five senses of human beings. The last flight of seven represents the seven liberal arts and sciences.

Once in the rotunda, visitors will see seven pillars. However, one pillar is purposely built broken to represent how death doesn’t allow us to finish the work we have planned for our lives. The monument doesn’t have a roof, which was done intentionally to leave the monument open to the elements. Some claim it’s because the roof would have been too expensive, but what’s $20,000 to a lime tycoon?

The centerpiece of the entire structure is breathtaking. It’s fittingly a huge limestone table, surrounded by stone chairs around it. Each chair represents a member of the McMillin family, complete with their names engraved and their ashes placed inside each of the hollow chair bottoms. There is one chair missing from the table, and it is said that this represents the one McMillin son who turned his back on the family religion.

John McMillin’s gratitude to others is truly shown by the fact that the family aren’t the only ones interred here. John’s secretary, Ada Beane, is buried at the mausoleum alongside the family she served for years. Her cremated remains weren’t brought to the mausoleum until the 1950’s, which is when the unexplained events began to occur at Afterglow Vista.

According to countless reports from visitors, strange blue orbs have been spotted and photographed hovering above the chairs at the limestone table in the center of the monument. People also claim to hear disembodied voices when no one else is around, and on rainy days, it’s almost as if no water falls into the center of the rotunda, where the roof would have been. Those who are brave enough to sit in the chairs report a strong uneasiness and a feeling of wrongdoing, or trespassing. Others have even reported feeling hands on them, pushing them off of the chairs.

According to another legend, it’s said that as the sun sets on the mausoleum, shadows begin to appear sitting at the table, almost as if the family meets up nightly to discuss matters.

If you find yourself on San Juan Island in need of a detour, check out Afterglow Vista. Visit for the unexplained, the symbolism, but be sure to visit with respect for the family buried there.