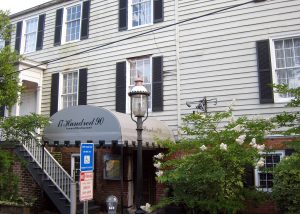 When visiting Savannah, one can expect to come across a few haunted locations. The entire city is brimming with southern charm and history. Savannah is the oldest city in Georgia, and its antebellum architecture and cobblestone streets make it a bucket-list must-see.

Savannah is regarded as one of the most haunted cities in America, and it’s not hard to see why. Savannah’s involvement in the Civil War, as well as a Yellow Fever epidemic, has left the city with a uniquely tragic history.

Not only is Savannah the perfect getaway for ghost enthusiasts, but the town is well regarded for its nightlife and culinary options. Countless hundred-year-old buildings still stand throughout the city, including Savannah’s oldest inn, 17Hundred90 Inn and Restaurant. Named for the year it was constructed, the inn has been watching over the city streets for over 230 years.

A Bit of Inn History

The 17Hundred90 Inn was originally three separate residences that burned down in 1820. It was rebuilt as a single building just a year later and has been hosting visitors since. The inn is nestled in a quaint residential area of the city and is the quintessential old-world southern inn. Visitors to the inn will enjoy period-decor, delicious food, and even three reported resident spirits!

There are at least three ghosts who are known to inhabit the inn. The most well-known is Anna. She is said to reside on the second floor, in room 204, where she frequently moves guests’ jewelry and clothing. Some have reported being nudged or having blankets moved off of them during the night. She is sure to remain friendly and show her southern hospitality, but she also wants her presence to be known. According to legend, Anna was the bride of an arranged marriage who fell in love with another man, a sailor, in the early 1800s. Her life is said to have ended tragically when she threw herself from a third-floor window onto the brick courtyard below, as her seafaring one true love had sailed away. Some suggest that she was actually pushed by her angry and jealous husband. The inn even has a journal for the rooms, and past guests of room 204 have said this about their stay:

“You can feel something here… if it is Anna, she is a peaceful spirit.”

“We heard footsteps and the floorboards creaking, Got touched and saw a shadow.”

Some guests even request room 204 so that they may have the chance to witness Anna for themselves.

“On the fireplace mantle, there is a shrine to Anna. I woke up to a tap on my solar plexus around 2:30 in the morning”

This visitor actually chose room 204 and brought along ghost hunting equipment, but ended up falling asleep before they could set it up. Sure does make you wonder what they would have caught that night!

Another reported spirit of the inn is Thaddeus, who is seen on the ground floor of the restaurant and tavern. He leaves shiny pennies on the tables, bar, and desk. Guests describe him as a friendly spirit who just exudes a warm aura.

Not all of the ghosts at 17Hundred90 are considered friendly — one spirit that roams the kitchen area has actually been reported throwing spice jars and other utensils at unsuspecting kitchen workers. This spirit is said to be the old head-cook, who reportedly practiced voodoo in his lifetime, and who hates when women are in the room.

In Search of a Ghostly Run-‘Inn’?

the 17Hundred90 Inn and Restaurant is one of Savannah’s most haunted locations, and it truly does live up to its name. Even if you’re a skeptic, the food and hospitality of the inn are otherworldly, just like the spirits said to roam the property. According to staff, the ghosts at 17Hundred90 prefer to show themselves to non-believers… so gather your belongings, your family or friends, and book a room at the 17Hundred90 for the night, you never know who will show up!