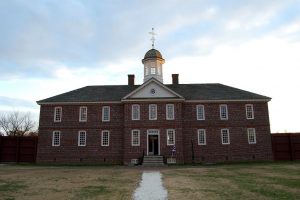 Your everyday public hospitals were once also used to house those needing extensive psychiatric care. ‘Public Hospitals’ were America’s first mental asylums, providing treatment to countless patients around the country.

Williamsburg’s public hospital was no different — it saw hundreds of patients, doctors, and families coming and going. In its early history, the hospital was tainted with the mistreatment of its patients, some being treated worse than inmates in the state’s prison system. Patients endured cruel and unusual punishments, long periods of isolation and confinement, and their small, barred cells had only a single window for light to peek through.

Patients were shackled to the walls and slept on the floor or on dirty straw-filled mattresses if you can call them that. On top of their horrific living conditions, patients were forced to take immense amounts of drugs. Some were dunked in cold water with their hands and feet bound in order to rid their bodies of their disorders. Others were jolted with currents of electricity to remove ‘negative energy’ from their scared and abused bodies.

How could this have happened? What is the timeline of Williamsburg’s public hospital?

Although it is widely known that the first hospital in the United States was the Pennsylvania Hospital, founded in Philadelphia in 1751, few realize that the first American hospital dedicated solely to the treatment of the mentally ill was built in Williamsburg. Also known as Eastern State Hospital or Eastern Lunatic Asylum, it was the first proposed to the Virginia House of Burgesses in 1766 and admitted its first patient in 1773.

Back in those pre-Revolutionary War times, mental illness and the mentally ill were viewed through a darkened lens. The ‘disastrous’ consequences of ‘untreated lunacy’ were highlighted in various gazetted and newspapers, one account being specifically shocking. For example, one editor wrote in the wake of a murder committed by a “lunatic” that:

“It is really shocking to see the number of miserable people who have lost the use of their reason, that are daily wandering about, for want of a proper house to keep them confined in. If there had been such a place, this poor man would not have met with the above untimely end.”

Another article noted that a wife described as “long disordered in her senses” murdered her husband with an ax and appeared to be “quite insensible of the horridness of the crime she committed.”

With this societal push and political and economic grounds, the hospital was erected near the College of William and Mary in what is now known as Colonial Williamsburg.

Although it was shut down for five years during the Revolutionary War where it was raided for supplies by both sides during the Civil War, it remained in continuous operation until a large fire claimed the structure in 1885.

During the long history of the public hospital, various treatments were tried. These all appear to be the same that were implemented at various other institutions across America. Some of these treatments are strange and ineffective at best, and deadly at worst.

Dr. John Galt’s writings provide a window into the theories of the treatments he provided as the superintendent of the hospital. He stated that providing the patients with a variety of drugs would depress the excessive nervous excitement, procure sleep, support strength, and withdraw the patient’s mind from their delusions.

Baths of varying temperatures, oils, tinctures, and exercise were also used as treatments at the hospital. Restraint was used in response to extreme cases of behavioral disorder or dangerousness, or so they say.

Galt also used bleeding, a medical practice in common continuous application since at least ancient Greece. It typically involved drawing some eight to sixteen ounces at various intervals, ranging from three to sixty individual drawings depending on the particular disorder being treated.

In 1841, John Minson Galt II became the public hospital’s superintendent and changed the conditions of the asylum dramatically. He worked in the hospital for over twenty-one years tirelessly to improve the lives of the patients he thought should be treated with care and respect.

Unfortunately, the Battle of Williamsburg started shortly after he started and Galt was forced from the hospital when Union soldiers took it over.

This devastated the humanitarian, and many believe that he took his own life in the anguish of his forgotten patients.

He overdosed on laudanum, a very strong opiate, and was found dead in his home located on the hospital grounds. The compassionate healer had ingested such a massive amount of the medication that many vessels in his brain had burst, leaving a large pool of blood on the wooden floor. Soon after his death, the Lee family moved into Dr. Galt’s former home.

Mrs. Lee wrote, “I could do nothing to get the blood stain out of the floorboards. No amount of scrubbing would remove it. We finally had to pull up the soiled portion and replace it with fresh wood. I was shocked to find the very next morning, the stain somehow made its way onto the new flooring! My children are frightened. They wake me most every night claiming a man is in the upstairs room where Doctor Galt died.”

Years after the Lee family left the former Galt home, it was torn down. However, there is evidence that the ‘good doctor’ still remains on the grounds where he lived and worked.

When the home was torn down, locals believed that Dr. Galt’s spirit just moved over to the neighboring asylum.

Amy Billings, an employee working in the rebuilt Public Hospital, says, “Tourists complain of sudden gusts of wind sweeping through the halls. What’s even more strange is sometimes when we arrive in the mornings, the bed in the exhibition room looks as if it’s been slept in.” Cindy Franklin, another Colonial Williamsburg employee, also experienced strange occurrences in the asylum. “At times, items in the hospital seem to disappear. No matter how long we search, we can never find them.

The weird thing about this is later the same day they magically reappear. Sometimes I think our ghost is a practical joker. Maybe he’s bored and needs to get into a little mischief.”