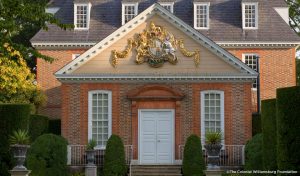 The Nicolson House was built sometime between the years 1751 and 1753. It lies on the east side of York Street and was placed on a very sizeable plot of land which was owned by the famous lawyer and planter Mann Page. Though Mann was born in Gloucester county, he spent most of his life in Spotsylvania, on his massive plantation known as Mannsfield.

When Page passed away in 1730, his son sold some of the family property in York county, including a one-acre tract on which the Nicolson House was later constructed. Cabinet-maker James Spiers was the first person to purchase the lot, but he did not build anything. Within a year, he lost interest and sold it to a tailor named Robert Nicolson, although some sources say his last name was spelled ‘Nicholson.’

At the time, Nicholson was just twenty-six years old and was just beginning to establish himself as a tailor. In 1773, he acquired a humble two-story building that was located on Duke of Gloucester Street and launched his tailoring career from it. The salesroom took up more of the first floor with a counting room on the back, while the second floor was used for living purposes and storage. Nicolson’s tailor shop operated as a post office and general store as well!

With the income he brought in from the store, he built a small and unpretentious two-story building on the land that he had purchased from James Spiers. This is where the history of the Nicolson House begins.

The Nicolson House was where Robert and his wife, Mary Waters, raised their seven lovely children and spent their lives together. A few of them became very famous in Virginia — their oldest, Robert Jr., became an acclaimed Revolutionary War surgeon and another, George, served as the mayor of Richmond, Virginia twice.

Robert Nicolson used the Orrell House as a template for his own home. The Orrell House, which is also located in historic Williamsburg is found on East Francis Street. Both the Nicolson and Orrell homes have a fireplace and bedrooms on the first floor. Around 1776, Nicolson augmented the west end of his home with a gorgeous two-bay extension. Besides this change, the home has remained the same for the past two centuries.

For a brief period of time in history, Nicolson decided to rent out some of the home’s bedrooms to weary travelers in need of a place to lay their heads for the evening. The extra income didn’t hurt, either. He promised to provide borders with a hot breakfast and even offered to stable their horses for the duration of their stay. Among his visitors was Cuthbert Ogle, a conductor and concert organizer who sailed to Virginia from London in February of 1755.

Sadly, Ogle’s time in America was short — he died within two months of his arrival on April 23rd, 1755. He left behind his collection of music — sonatas, concertos, and overtures. While alive, Ogle contributed to Williamsburg’s music community and in his room in the Nicolson House, he offered to teach people how to play various instruments including the harpsichord, violin, and organ.

Another famous tenant was James Mercer, a lawyer who found himself in a bit of a pickle when he was scheduled to duel with a man named Arthur Lee. The two supposedly had agreed to meet in the morning on a horse pasture on York Road, but Mercer was late for their appointment, which during those times, was frowned upon — I mean, who misses a duel?

Nicolson was actually asked to testify in court as to whether Mercer’s lateness was intentional or not!

Nicolson found himself very busy as his business grew and grew. He used the Virginia Gazette to look for lodgers and employees and even used the publication to sell off unwanted property.

Robert Nicolson sold his store in 1776 and stopped taking in lodgers one year later. He continued to live in the Nicolson House, though. Perhaps he wanted to focus more on civic affairs, as he already was pretty well known in Virginia’s political sphere. Before the Revolutionary War, he served on a committee that included the famous likes of William Pasteur, John Minson Galt, George Wythe, and Peyton Randolph, for instance. Pasteur and Galt were Williamsburg physicians who partnered up in 1775 to open an apothecary shop. Colonists would go there to buy medical supplies and herbal remedies. George Wythe was an acclaimed lawyer who hailed from Chesterville. He is famous for being our nation’s first law professor (Thomas Jefferson was one of his students!) Throughout his career, Peyton Randolph also taught law, most often at the College of William and Mary. He is best remembered for his leadership skills and for becoming the first president of the Continental Congress.

Hauntings of the Nicolson House

As with other historic homes in Williamsburg (like the George Wythe House) the Nicolson House is also reportedly haunted. Cuthbert Ogle, the composer, is said to haunt the property, touching visitors and scratching on the walls and doors at night.

Now the Nicolson House may only have one reported ghost on site, but the Wythe House is believed to have multiple. Unsettled spirits include George Wythe himself and the wife of a wealthy planter, known as Lady Ann Skipwith. Wythe was murdered by his great-grandnephew, who poisoned him with arsenic. Lady Ann Skipwith is rumored to have committed suicide in one of the house’s bedrooms, after seeing her husband flirt with various women during a gala held at the mansion.

What makes the Nicolson House unique, though, is that it is one of the few properties in Colonial Williamsburg which was always “privately owned and continuously inhabited.”9 Robert Nicolson’s children took over the home after he died on July 14, 1797. Nicolson lies buried at Richmond’s St. John’s Episcopal Church. Eventually, others acquired the building, including the Power family and a man named John Slaughter.

Want to experience the haunts of Colonial Williamsburg for yourself? Join us for a hauntingly fun and historically accurate Williamsburg Ghost Tour!