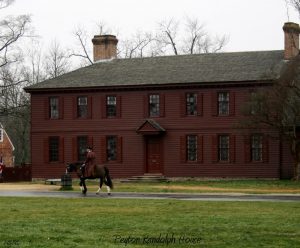 The Peyton Randolph House is featured on nearly every ghost tour around Williamsburg and remains one of the most infamous structures in the town. Freak accidents, murders, war, and mysterious natural illnesses have claimed about thirty lives in the home since it was built in 1715.

Want to get up close and personal with the ghosts of the Peyton Randolph House? Join us for a ghost tour of this malevolent house and the ghosts that still call it home!

History of the Peyton Randolph House

Some buildings in Williamsburg are well over 200 years old, making it the perfect destination for history buffs. But one building in Williamsburg is famous for this and more sinister reasons.

The Peyton Randolph House has quickly become one of the most popular haunted destinations in town. This historical site attracts history buffs and those with an affinity for the strange.

One of the oldest and most original homes in Colonial Williamsburg, the Peyton Randolph House was constructed in 1715 by a man named William Robertson. Sir John Randolph purchased the home in 1721, and later purchased the land adjoining it. He proceeded to build a second home on the eastern lot in 1724. When he died in 1737, the home was under the care of his wife, Susannah, until his middle son Peyton turned twenty-four.

Their first son Beverley inherited property in Gloucester County and their third son received land in the city’s southern area. Susannah remained in the home until her death in 1754.

After his mother’s passing, Peyton expanded the home, building an elaborate center section that connected all former rooms and formed the L shape structure that stands today.

The main section of the home still contains some of the original walnut paneling, brass hinges, and a floor made of ancient edge-cut pine. On a tour through Colonial Williamsburg, one can see the attention to detail of the home’s interior, and some of the older aspects of the house on the second floor, where the Randolph family slept.

Peyton Randolph was an established politician later in life and was even an integral part of the Continental Congress during the Revolutionary War. He is considered to be the first President of the United States, as he was the President of the First and Second Continental Congresses and played an important role leading up to the American Revolution.

Randolph chaired the meeting during Patrick Henry’s famous ‘give me liberty or give me death’ speech and negotiated the return of gunpowder to the colonial magazine. His home even served as a meeting place for other revolutionaries such as his cousin, Thomas Jefferson, and George Wythe.

Following his death in 1775, his body was pickled in a barrel and sent to Williamsburg. Today, he is one of the few that is buried under William and Mary’s Wren Chapel in the Wren crypt. After Peyton’s death, his wife, Elizabeth “Betty” Harrison, resided in the home until her death in 1782.

The Peachy Family and Wartime Involvement

A little-known fact about the Randolph house is that during the aftermath of the Battle of Williamsburg, the Peyton Randolph House, occupied by the Peachy family, was used as a hospital to treat wounded soldiers. Nearly 30 other buildings were used as hospitals during this time.

Hauntings of the Peyton Randolph House

Of course, as with almost any building in colonial Williamsburg, there comes hauntings. As for the Peyton Randolph House, voices are heard inside, objects move on their own, and visitors, including the famous French General of the American Revolution Marquis de Lafayette, have felt hands touch them or even push them, sometimes down a flight of stairs.

In 1824, Lafayette returned to Williamsburg, where he had spent some time during the Revolutionary War. During his tour through the US, he stayed at the Peyton Randolph house in Williamsburg. He wrote:

“I considered myself fortunate to lodge in the home of a great man, Peyton Randolph. Upon my arrival, as I entered through the foyer, I felt a hand on my shoulder. It nudged me as if intending to keep me from entering. I quickly turned, but found no one there. The nights were not restful as the sounds of voices kept me awake for most of my stay.”

When the building served as lodging house as recently as the late 1960s, guests would rush out in the middle of the night, claiming to have been physically and violently shook, their limbs tugged on, or to have seen apparitions over their bed. An interview from the book by Jackie Bernhard, the Hauntings of Williamsburg, Jamestown, and Yorktown, recounts one guest’s experience:

“I was resting comfortable when awakened by the peculiar feeling that someone was tugging on my arm. Naturally, I assumed I was dreaming, so I rolled over and went back to sleep. A short while later, I was being shaken violently! As my eyes adjusted to the darkness, I could see that I was completely alone. I darted out of bed and ran as fast as I could. I didn’t even go back to collect the things I’d left behind.”

When the Peachy family occupied the home in the 19th century, one of the boys was climbing a large tree in the yard when a branch broke and he fell to his death. A young girl living on the second floor fell out of her window to her death. A confederate veteran attending the College of William and Mary suddenly and mysteriously fell ill and died in the house. Later in the 18th century, two men staying at the house entered a heated argument and shot and killed each other.

One of the more popular and more recent stories is that of a Colonial Williamsburg security guard, who became trapped in the basement of the house after entering through the shutter doors behind the house. As he was making his exit, he heard a large and terrifying growl and felt something grab his legs, as if holding his feet firmly down. He was stopped in his tracks and unable to move his legs. Then, suddenly, the shutter doors slammed shut and his flashlight turned off.

The basement of the home is also known for its disembodied voices, malevolent entities, apparitions, and the feeling of being watched.