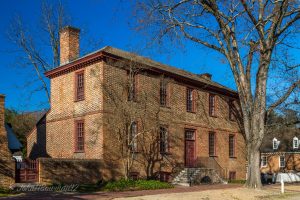 Also known as the Ludwell-Paradise House, the Ludwell House was the first place that Reverend Goodwin obtained when they launched Williamsburg’s restoration project. It’s got unmatched Georgian brick architecture which was constructed for Philip Ludwell III in 1755.

In the 1920s, Reverend Goodwin returned to Williamsburg to take up the post of rector at the Bruton Parish Church, and he quickly realized the seriousness of the deterioration and loss of many of the 17th and 18th buildings in the town. At the end of 1926, John D. Rockefeller Jr authorized Reverend Goodwin to purchase the Ludwell-Paradise House.

Looking to explore the hauntings of Williamsburg for yourself? Join us for a hauntingly fun and historically accurate Colonial Williamsburg Ghost Tour!

History of the Ludwell House

While the acquisition of the Ludwell home marked the beginning of modern-day colonial Williamsburg, the Ludwell family was among the first families in the town to build the ‘original’ Williamsburg.

Thomas Ludwell arrived in Virginia in 1660s and soon served as secretary of the colony. He was an influential figure and had a say in most of the building that occurred shortly after his arrival. Philip Ludwell inherited Rich Neck Plantation from his brother, Thomas, who passed in 1678. This plantation no longer exists but can be described as the immediate area around colonial Williamsburg.

Philip was a prominent Williamsburg resident — he owned the Green Spring Plantation in James CIty County and was well-traveled, visiting London frequently.

In 1767, Philip’s health failed him — he passed away in London, leaving Lucy Ludwell, his second daughter to inherit the Ludwell home. Lucy was living lavishly in London (say that five times fast) with her husband John Paradise (hence the name) so the Williamsburg home was rented out to residents when the Paradises weren’t staying in it. While she was in London, the home etched a colorful history and bore witness to the American Revolution and a handful of colorful tenants.

John Paradise was a linguist and scholar, as well as a friend to many, including Thomas Jefferson. Even with all of that success, he and Lucy were financially unsuccessful. As a result, his death in 1795 left Lucy destitute — she soon packed her bags and returned to her Williamsburg home.

Lucy was born in 1751 in Greenspring, near Williamsburg, Virginia. She sailed for England with her family in 1760 and settled in London where in 1769, she married a man named John Paradise. As a couple, they enjoyed the luxuries of life and moved in social circles that included Samuel Johnson, Ben Franklin, and Thomas Jefferson.

Lucy was a member of London’s social elite. She was unconventional and a bit eccentric, but her social savvy allowed her to gain many friends and colleagues. After she was left with nothing when her husband passed, her return to her childhood home was a fresh start — but you can’t take London out of the girl. Her old life followed her and she continued to fascinate those around her. With time, people became more and more unforgiving of her unusual behavior. She was a suspected thief that wandered around the streets with servants as if she were royalty. It took some time, but the people of Williamsburg eventually decided that Lucy needed to be put away. They committed her to the Public Hospital and ripped her from her house, trapping her within the asylum walls for two years.

Now, we all know of the atrocities that occurred in asylums of Lucy’s day — this one must have been particularly bad, because after two years of living in it, Lucy committed suicide.

Hauntings of the Ludwell House

Her ghost is said to haunt the upper floors of the Ludwell home, endlessly wandering the halls and using the tub to bathe over and over again. The sound of running water and footsteps are most often reported. Lucy is known to have bathed multiple times a day, perhaps she was suffering from some sort of OCD, however, we’ll never know for sure.

It’s sad, really, that Lucy was so heavily judged for her strangeness — was she actually a threat to society, or was she just an eccentric lass with an imagined life.

How will Lucy be remembered? Will she be thought of as a socialite who was just a tad bit eccentric? Or will she be remembered for her strange bathing habits and time spent in an asylum? Lucy’s life was no doubt an exciting one, so it really depends on who you ask.