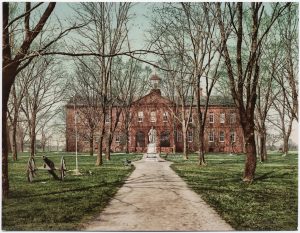 As the country’s second oldest school of higher education, the College of William and Mary follows only after Harvard University. The school itself was founded in 1693 and houses the oldest college building, the Christopher Wren Building, which has been in continuous use since 1693.

After seeing over three centuries of struggle, war, and tragedies, it’s no wonder that there are multiple reports of hauntings all across campus.

A History of the College of William and Mary

The College of William and Mary was founded in 1693 with charter letters from King William III and Queen Mary II of England. At this time, the entire college was just the building we know now as the Wren Building. From there, the college grew and grew into the campus it is today.

Williamsburg itself was the capital of the colony of Virginia for a while before that honor was given to Richmond. The school educated the likes of multiple presidents and other state founders, including James Monroe and Thomas Jefferson, four signers of the Declaration of Independence, and many members of the Continental Congress even attended classes at the college.

The college had been captured several times during the various wars that Williamsburg saw, and witnessed all of the bloodshed that came along with those violent and tragic times.

William and Mary is now considered to be one of the best schools in the country, even with its ghostly alumni wandering the halls.

Hauntings of the College of William and Mary

The Sir Christopher Wren Building at the William & Mary is the oldest college building still standing in the United States and the oldest of the restored public buildings in all of Williamsburg! The Wren Building was erected between 1695 and 1700, before Williamsburg was even founded, when the capital of the colony of Virginia was still Jamestown.

As early as 1619 there was interest fluttering about in the streets of Virginia about constructing a college. The Virginia Company of London undertook establishing a university at Henrico on the James River about 12 miles below the present city of Richmond. The Native American uprising of 1622 and the revocation of the Virginia Company charter in 1624 caused this attempt to be abandoned.

In 1691, however, Reverend James Blair of the Church of England in Virginia was sent to London by the General Assembly to secure a charter for a college.

He succeeded, and on February 8th of 1693, King William III and Queen Mary II granted the charter that established a ‘place of universal study, a perpetual college of divinity, philosophy, languages, and other good arts and sciences, consisting of one president, six masters and professors, and a hundred scholars more or less.’ This new college bore the King & Queen’s names, and the college was to consist of three schools.

About 330 acres of land were purchased in December of 1693, and the very first bricks for the main building were laid in 1695. By 1700, the east and north wings of the structure had been completed.

The first college building housed students and contained a library, classrooms, dining room, as well as living quarters for the president and professors. Known simply as ‘The College,’ the main building was renamed in 1931 for the famous architect Sir Christopher Wren, who was attributed to the design.

In 1699, the capital of Virginia was moved from Jamestown to Williamsburg, and the Wren Building became the temporal headquarters of the government in the area from 1700 until 1704 when the state Capitol was completed.

The Wren Building was gutted by fire in 1705 and was thankfully rebuilt in 1716 with funds provided by Queen Anne of England. The second form of the building differed in many ways from the original structure but it was erected on the original foundations and much of the original walls were used during the restoration process, giving a place to history in the present, much like most of Williamsburg.

The Wren Building served as a hospital for wounded French soldiers during the Revolutionary War and the Battle of Williamsburg. Over 6,000 soldiers were killed during this time and ended up being buried underneath the Governor’s Palace — some were less lucky and were buried in random places around the city, with some more than likely being buried right on campus.

The school was closed in 1862 because most of the professors and students left to join the Confederate Army during the Civil War. The Wren Building was converted into a barracks and a hospital for the Confederate Army. Lack of medicine and painkillers meant that men with severe wounds were left to die, and many of them did.

Because of this bloody history, students have been claiming to see ghostly apparitions of wounded soldiers wandering around the Wren Building. Footsteps are also commonplace in the building and are believed to be those of the perished soldiers or of Christopher Wren himself.

Underneath the Chapel at the college lies the crypt of famous Virginians like Lord Botetourt and Sir James Randolph. None of these crypts are accessible to the public, but it’s said that loud moans are heard coming from the hidden tunnels that lead to them.

Brafferton and the Sunken Garden

In 1700, Brafferton was known as the ‘Indian School.’ It housed Native American boys that were sent to the college to be assimilated. They were kidnapped, and forced to leave behind their families and communities.

These days, a story exists of a Native American boy that tried to escape the college, running across the Sunken Garden, trying to return to his home and family. His apparition is reported to this day, sprinting as quickly as his feet will carry him across the garden where students lounge on nice, sunny days.

This building was once the school’s library, but it’s home now to the English department. The College of William and Mary is known for its intense finals and challenging classes, which leads to unfortunate cases of students becoming overwhelmed and ending their lives on campus.

One story tells of a female student who was irreparably stressed about her finals and committed suicide on the third floor of St. George Tucker Hall. She is said to appear to students, ask them how their studies are going, tell them to relax and try her best to convince them to commit suicide as well.

The College of William and Mary remains one of the country’s most haunted — with most of the buildings on campus being centuries old, the history at the college lends credibility to its haunted reputation.