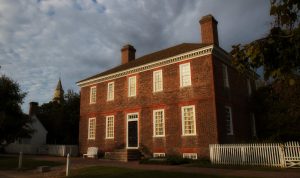 The haunting tales of the George Wythe House begin in 1753 when it was constructed for the enjoyment of the colonial elite. The brick mansion was given as a gift to George from his father in law. George Wythe was America’s first law professor and a mentor to President Thomas Jefferson. The home served as a headquarters to General George Washington and the French Lafayette before the Battle of Yorktown.

The hauntings here involve a past resident, Ann Skipwith and her husband Sir Peyton Skipwith, the two were friends of the Wythes. During the late 1770s, the Skipwiths enjoyed extended visits at the home with the Wythes until 1779 when Ann Skipwith died — her body was then buried in the Bruton Parish graveyard, laid to rest and almost all but forgotten by time…

However, history has dug up Ann’s story and now three stories tell of what happened to the Lady at the home. First, let’s delve a bit into the history of the Wythe House.

History of the George Wythe House

The Wythe House is located on the Palace Green in Colonial Williamsburg. It was built in the 1750s and built for George Wythe, the first signer of the Declaration of Independence and father of American jurisprudence. Originally, the home belonged to George’s father in law, Richard Taliaferro. It was built between 1752 and 1754 and was conceived as a whole with no additions ever added.

The house remained the residence of Richard and his daughter Elizabeth alone, up until 1755 when Elizabeth married George Wythe. The couple received the home as a wedding gift from Richard and they even received a life tenancy upon his death in 1779. Elizabeth lived at the home until her death in 1787, thereafter George moved to Virginia to serve as a judge.

The home saw several subsequent owners, including Reverend Dr. W.A.R. Goodwin, the rector of the adjoining Bruton Parish Church. Dr. Goodwin is known as the ‘Father of Colonial Williamsburg.’

The city of Williamsburg obtained the property in 1938 and painstakingly restored the interior to the appearance and form that the Wythe family knew and loved.

‘The Reverend Dr. W. A. R. Goodwin, the clergyman usually given credit for the idea of Colonial Williamsburg, once told newspaper columnist Ernie Pyle, “I wouldn’t give a hoot for anybody who doesn’t believe in ghosts.”‘

So, what are the three most prominent and most told stories about Lady Skipwith and her death?

The first tells that Ann died during a miscarriage and spend her last moments of George’s arms.

The second story is even more tragic and claims that Ann took her own life in the bedroom she shared with her husband. This version paints George as a womanizer. One night at a ball down the street at the Governor’s Palace, the couple had a heated argument in which Ann accused George of having an affair with her sister. She ran home completely devastated and committed suicide in the marital bedroom. After her death, George is said to have married Ann’s sister, and many believe that Ann’s jealous soul remains in the home.

The last story says that Ann’s husband left her side at the ball and was flirting with other women in attendance. Ann ran from the ballroom, George caught sight of her and followed her out. She ignored him, leaving the palace. He decided to stay at the party and did not follow her home. Storming into the carriage, she lost one of her red shoes and returned to the Wythe house with one shoe, where she ran up the stairs and slammed the door. At the Wythe House you may hear the sound of a woman running up the stairs, the sharp clack of a heel followed by the sound of a dull thud as from a bare foot.

Ann was miserable in her marriage, and as a colonial woman, had no escape from her situation. It is possible that taking her life would provide the only true freedom from life with her husband, in which case suicides were underreported during colonial times as it brought dishonor on a family. It is also possible that Ann’s husband killed her and attempted to cover it up with childbirth as cause, to marry her sister. Regardless of the reasons, Ann’s ghost is said to still wander about the Wythe home and gardens, appearing as a full-bodied apparition to visitors. One visitor claims to have witnessed Lady Skipwith’s wardrobe door open all on its won.

Other Entities at the Home

here is yet another spirit that haunts the Wythe House, and it may be George Wythe himself. In 1806, when George Wythe was nearly 80 years of age, he was poisoned by his greedy grandnephew, George Sweeney, who was the primary beneficiary in Wythe’s will.

Sweeney was deep in gambling debt and near financial ruin and thought that he could solve his financial problems by killing his elderly great uncle by poisoning his cereal. However, the plot was foiled by one of Wythe’s enslaved workers, Lydia, who witnessed the treacherous act. Wythe died a slow and painful death over two weeks in Richmond, but his last act was to remove Sweeney from his will. Although Sweeney was charged with murder, Lydia, the only witness, could not testify against him because slaves were not permitted to testify in court.

Although Wythe did not die in his house, many believe that he his spirit remains in his Williamsburg home, angry over the injustice of having been robbed of life. It is said that he returns to visit each year on June 8, the day of his death. Guests sleeping in his room report feeling a firm and cold hand press down on their foreheads.