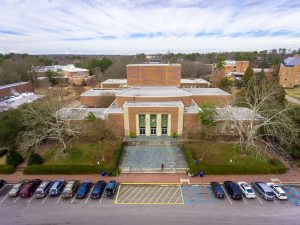 William and Mary is one of America’s most prestigious schools challenging its students at the highest academic level. While many extracurricular activities and academic societies exist at the college, one of the most notable is that of the Phi Beta Kappa Honors Society alongside the Phi Beta Kappa Memorial Hall which was built in the 1950s to commemorate the society.

The Memorial Hall holds the title of one of the nation’s top performing arts facilities — students in the school’s dance, music, and theater programs are honored to perform at the hall, this was especially true when it first opened in the late 1950s.

One student, named Lucinda, was cast as the lead in the theater department’s production of ‘Our Town.’ She couldn’t wait for opening night, she was so excited to prove her skills to the audience. However, she never showcased her acting abilities because she passed away shortly before opening night. It’s said that she has since haunted the Memorial Hall, unable to cross to whatever comes next due to her plight of unfinished business.

Are you looking to visit Williamsburg and experience the hauntings of this colonial town for yourself? Join us for a ghost tour!

Phi Beta Kappa is known as the very first national academic honor society and at its inception, was a secret society. Around the time that PBK was established, no one took the secret societies at William and Mary too seriously because of their reputation for partying a bit too hard. Phi Beta Kappa was established for the sole purpose of providing students with a society that focused on discussion and learning, not late nights and alcohol. Phi Beta Kappa was founded in 1776 by John Heath and five other students as they sat around a table at the Raleigh Tavern — kind of ironic, truly.

The society has closed its doors twice throughout its many years. The first time was during the American Revolutionary War. In 1780, the college shut down completely but reopened in 1781. Phi Beta Kappa didn’t follow suit, and before the Virginia Charter reopened, secret societies came under attack from religious organizations stating that they focused too much on philosophy. This forced Phi Beta Kappa chapters at other colleges to lift the veil on their clubs, and as a result, the Virginia Chapter reopened in 1851 and ended up being known as an honors society, not a secret one.

Phi Beta Kappa Honors Society remained open and running for the next decade. When the Civil War hit, PBK closed its doors for a second time and did not reopen until 1893. The society today has a rather impressive list of alumni including John Quincy Adams, Jimmy Carter, George H.W. Bush, ten chief justices of the Supreme Court, 136 Nobel laureates, and many many more notable names.

To honor Phi Beta Kappa’s achievements, a memorial hall was erected for the society in 1956. It’s now the college’s main performing arts complex as well as the largest auditorium on campus. The Mainstage Theater in the hall plays host to University ceremonies and lectures as well as theater productions of many kinds.

The building also houses more creative centers, such as a scene shop, computer design and drafting lab as well as a lighting lab.

Among these many rooms lie the reports of hauntings that exist within the walls of the Phi Beta Kappa Memorial Hall.

Hauntings of the Hall

The most reported haunting of the Mainstage Theater is that of a woman named Lucinda. She was attending classes at the college and received the lead role in an upcoming production. She never got to the spotlight and died tragically in a car accident before opening night.

Lucinda shortly after made her presence known when she appeared on opening night standing on the theater’s balcony — the show must go on, they say.

An understudy looked up and saw her wearing the black dress she was supposed to wear during one specific scene of the play, the graveyard scene.

Since then, multiple witnesses have seen Lucinda’s apparition throughout the building. She shows herself to students who perform on the stage and are leaving late at night. She’s even frightened a group of students so badly that they postponed rehearsals and left immediately.

One night, when an actress who was to wear a white wedding gown in a production at the hall was rehearsing her lines alone. She looked out into the auditorium and saw her costume sitting upright in one of the chairs, almost as if an invisible person was sitting in it watching her.

On another occasion, a young man claimed to have seen Lucinda as he practiced piano in the hall. When he finished gathering his things, he heard a voice ask him not to stop. When he looked around, he was alone.

Other students report hearing strange sounds coming from backstage, apparitions appearing in the seats of the theater, disembodied voices and even the sensation of being watched, touched, and followed.

The students at the College of William and Mary face a lot of pressure in their academic lives and Lucinda was no exception — it’s commonly believed that ghosts who stick around have unfinished business. Since Lucinda never got to perform, moving on to the next life was difficult for her. One wonders if she’ll ever be able to let go or if she’ll be stuck in the audience watching the days go by for all eternity.

The Phi Beta Kappa Memorial Hall isn’t the only haunted building on campus — it seems as if most of the historic structures in and around Williamsburg are haunted, including the Wren Building and the Lightfoot House!