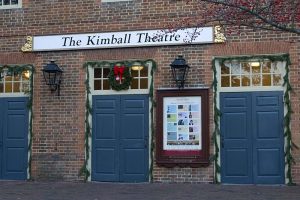 The historic Kimball Theatre has become a cornerstone of the performing arts community in Williamsburg, Virginia. Centrally located in the historic Merchant’s Square, the Kimball Theatre is home to stage productions, musical performances, public speakers, and more. The venue was also recently named one of the ’50 Best Small Stage Theaters in America.

The Kimball Theatre opened its doors to patrons in 1933 with the William and Mary production of ‘The Recruiting Officer,’ and beginning in 2018 it has served as the main production facility for the Department of Theatre and Dance at the college.

The theatre boasts 410 seats with a main theater and stage for live productions as well as a 35-seat screening room, a concessions stand and box office.

Want to visit Colonial Williamsburg and learn all about its haunting history? Join us for a Williamsburg ghost tour!

History of the Kimball Theatre

Located at 428 W. Duke of Gloucester Street, the Kimball Theatre has been a crown jewel of the college of William and Mary as well as the entirety of the city of Williamsburg. Since 1933, it has served the community in providing the best of the best when it comes to the arts.

The Kimball Theatre was built as the sister theatre to Radio City Music Hall and even opened that same week by John D. Rockefeller. It was part of his restoration plan for Williamsburg and is located in Merchant’s Square, a shopping and dining area that lies adjacent to the restored area.

In keeping with the appearance of the colonial era, the exterior of the theatre was kept rather plain — it resembled a house instead of an opulent performing arts center. There’s no neon marquee or gaudy sign, but a simple poster and small sign featuring the name of the theater.

The theater was built with a smaller-than-normal lobby in order to trick the public into thinking that the shows were more popular than they were — forcing people into a small space makes it seem a more exclusive event, and many folks considered themselves lucky for being able to get in the doors!

The building itself was renovated around the year 2000 to accommodate live programs in addition to films. The seating capacity was reduced in the main auditorium while the screening room was added above the lobby. The theatre is now owned by the Williamsburg Foundation, and is thoroughly protected and adored by the community and visitors alike.

The theatre fell on hard times in 2017 and closed for a period of time, but is reopened and ready to serve the public once more.

A lovely history, wouldn’t you say? So, what is this we hear about Civil War ghosts in the theatre? And what is the Kimball Theatre’s involvement in the war?

The small and quaint Kimball Theatre did not always occupy the space, and it’s not a historically recreated colonial building like the rest of Colonial Williamsburg.

During the Civil War, the Kimball Theatre was the Ware House, owned by a recently widowed Mrs. Ware. In the aftermath of the Battle of Williamsburg in May of 1862, the once peaceful streets of Williamsburg were riddled with wounded and dying soldiers.

The combined loss by both sides exceeded 4,000 people — Mrs. Ware took in a wounded Confederate soldier and did her best to care for the man, but he died inside her home that same day. She covered his body with a blanket and awaited the arrival of Union forces.

When a Union troop arrived at the home, they commandeered the structure as a makeshift field hospital. The Ware home was one of fifteen private residences in Williamsburg that was used for that purpose.  Mrs. Ware welcomed the men in and informed the officer that she had a dead Confederate soldier in her home. As the commanding officer inspected the body, he slowly peeled back the blanket covering the man’s face to find the mangled remains of his younger brother. The two Virginia men had joined opposing sides at the outbreak of the war. The surviving brother was shocked and heartbroken to discover that his brother was cut down in the same battle.

The surviving brother was later killed in the war and to this day, two men wearing Civil War garb are seen wandering around the theatre and what used to be the Ware home. One appears in blueish clothing with gold trim, the other wearing more ragtag grey clothing — accurate, to say the least, as the Union troops were known to have uniforms while Confederate soldiers just wore what they had.

The two men are seen walking through solid walls at the theatre and vanishing into thin air as they wander. Toilets in the women’s restroom flush on their own and water faucets are reported to turn on and off by unseen hands.