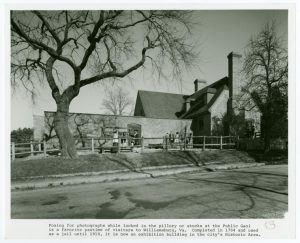 In 1638, English colonists established their first inland settlement on the high ground of the Virginia Peninsula, between the York and James rivers. In 1699, the settlement of Middle Plantation was renamed Williamsburg and was given the honor of serving as the capital of the Virginia Colony, before Richmond took its place — this is around the time the Public Gaol was brought to life.

As a result, Williamsburg truly has one of the most unique histories — it’s bore witness to almost every aspect of the growth of America, it lived through the Colonial era, the American Revolution and the Civil War. These days, it sits with a healthy population of over 14,000 residents and still has most of the historic buildings that it started with.

Looking to meet the ghosts of Williamsburg and learn all about the city’s immense history for yourself? Why not join us for a hauntingly fun and historically accurate Williamsburg ghost tour?

One of Williamsburg’s most infamous structures is the Public Gaol, or jail. This was the place where the accused awaited trial. Each prison cell in the gaol was designed to hold six inmates — all shackled to the walls. Although allowances were made for the accused to spend time in the exercise yard, the overcrowding and lack of sanitation made illness and suffering commonplace.

Conditions were said to be so bad that many prisoners preferred the gallows over incarceration at the gaol.

History of the Public Gaol — How It Came To Be.

Construction of the jail was authorized by general assembly in August of 1701. Virginia’s general assembly ordered a ‘substantial brick prison’ built in Williamsburg soon after it decided to make the city its new capital. Known as the Public Gaol, the buildings construction was authorized in August of 1701. Contractor Henry Cary got the job, as he would for the Capitol and Governor’s Palace. He had two cells ready in a building just north of the Capitol on Nicholson Street by May of 1704.

A Bit On Old North French

The Northern dialects of Old French include those of Normandy and Picardy — it was also the language spoken in most of the northern half of France from the 8th-14th centuries. The region where Old French was spoken natively roughly extended to the northern half of the Kingdom of France but its influence was much larger, as it was carried to England and the Crusader states as a language of commerce.

The word gaol is pronounced like ‘jail,’ it comes from an Old North French word ‘gaole,’ which in turn comes from the Latin term ‘cavea,’ which means cage.

More On the Gaol

Debtors, runaway slaves and sometimes the mentally-ill were placed in the gaol. During the American Revolution, spies, prisoners-of-war, deserters, and traitors were placed into incarceration as well.

Most of the occupants in the jail were awaiting trial in the general court and the Court of Oyer — they were waiting to be branded, whipped, or hanged — according to their sentences.

Infamous Prisoners at the Gaol

The Public Gaol housed many infamous occupants, such as the fifteen henchmen of the pirate Blackbeard. They were caught in 1718 and the infamous Henry ‘Hair Buyer’ Hamilton was captured and placed in the jail in 1779. Hamilton was suspected of buying pioneer scalps from Native Americans, and he was held in a 10-by-10 foot cell with six other men. Hamilton wrote of the jail:

“In one corner of this snug mansion, was fixed a kind of Throne which had been of use to such miscreants as us for 60 years past and in certain points of wind rendered the air truly Mephytic. Opposite the door and nearly adjoining the throne was a little Skuttle 5 or 6 inches wide, through which our Victual was thrust to us.”

This description really paints the picture of how dirty and terrible the jail actually was. The Gaol even had its own fever, Gaol Fever, which was probably typhus. This broke out from time to time due to the unheated cells and close quarters.

In 1711, two debtors’ cells were added. Debtors were kept for 20 days in the gaol at the public’s expense, after which their creditors had to pay to keep them confined. It cost sixpence, or five pounds of tobacco to keep an inmate for a day.

The keeper’s quarters were extended in 1722 and an exterior courtyard was added. The Public Gaol appears today as it did after the renovations of 1722 with eight cells, a courtyard, exercise yard, and rooms for the jailer.

Today, strange shadows are seen moving around the cells and courtyard, and the balls and chains that are on display at the museum have been seen swinging on their own. Some visitors have even reported the sounds of banging on the cell walls and disembodied voices moaning and groaning at all hours.

The Gaol was never meant to house significantly dangerous inmates like murderers or pirates, but it did cause significant suffering to those who were incarcerated there. The shared chamber pots, the starving, the freezing — it’s truly unthinkable the conditions which these inmates endured.

Even sadder, many of the inmates were enslaved people who had gotten away and some were even just mentally-ill, thrown into the confines of the cells without a second thought. Jails of the early 1700s were horrifying, the the Public Gaol of Williamsburg is no different.

These days, it sits with a museum inside of it, a stark reminder of the barbaric ways ‘justice’ was served and as a reminder of what not to do in the future.