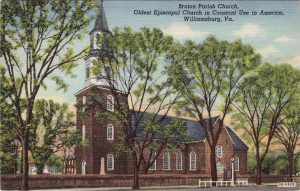 Graveyards may sound horribly depressing to most readers, but the original cemeteries of Virginia’s historic churches tell us plenty of useful things about the people who lived before us. Back then, life spans were much shorter, epidemics were frequent, many women died during childbirth and many children didn’t last past their first couple of years. It’s tradition for historic churches to have graveyards attached — places where members of the congregation and their families can be laid to rest right alongside their chosen place of worship. Our story behind the Bruton Parish Graveyard starts with Williamsburg’s historic Bruton Parish Church — the oldest surviving building in all of Colonial Williamsburg with construction completed in 1683 — a testament to the architectural prowess of the time.

Looking to visit the haunted streets of Colonial Williamsburg for yourself? Why not join us for a hauntingly fun and historically accurate Williamsburg ghost tour?

History of the Bruton Parish Church

The Bruton Parish Church was constructed and completed in 1683 — over 300 years ago.

It served as a makeshift hospital during the Civil War and later became a mass burial site for about one hundred soldiers killed during the Battle of Williamsburg.

Surrounding the church is a gorgeous cemetery with graves marked from the 17th century all the way up until the 20th century. Each grave carries its own story and the story of the person buried beneath it. From unknown Confederate soldiers to one of the church’s colonial reverends and his wife who died too soon, the adjoined Bruton Parish Church Cemetery is truly a melting pot for the dead.

The Bruton Parish Church is located in the restored area of Colonial Williamsburg. It was established in 1674 by the consolidation of two previous parishes in the Virginia colony and remains an active church today. The building was constructed somewhere between 1711 and 1715 and was designated a National Historic Landmark in 1970. It truly is a shimmering example of colonial religious architecture.

Reverend Robert Hunt served as the first chaplain of that primitive chapel all those years ago. He was described as an honest and courageous man, even bringing harmony and acting as a peacemaker when men would quarrel.

When learning about the history of the church, one will find some pretty strange stories surrounding it. Remember the colonial Reverend we mentioned earlier? The one buried in the adjoined cemetery with his wife? Well, when Reverend Jones and his wife were expecting their first child, complications arose during labor and the doctor informed him that his beloved wife would not survive their baby’s birth.

While she was on her deathbed, he proclaimed his undying love for her and told her he could not live without her by his side. He asked her to wait for him so that they could be together in heaven, and had her buried in the church cemetery.

Three months later, Reverend Jones was riding into town in a carriage with a tombstone he had made for her grave. During this time, witnesses saw his wife roaming the church and cemetery grounds, even sitting in one of the church pews, plain as day. The only problem is, she was dead and buried months ago.

Not only was Reverend Jones bringing a tombstone to mark his late wife’s grave, but he would arrive with someone else — his new wife.

Almost immediately upon the arrival of Reverend Jones, people continued to see the apparition of Mrs. Jones in the church and the graveyard, only now she was seen crying and wailing, angry over his broken oath to her.

To add insult to injury, Reverend Jones had his new wife’s grave plot placed between him and his first wife. The Joneses are still buried in the Bruton Parish Church graveyard. This leads us straight to the hauntings reported by visitors to the graveyard.

History and Hauntings of the Bruton Parish Graveyard

The oldest dated tombstone at the yard is that of colonial secretary Thomas Ludwell, who passed in 1678 — before the present and second Bruton Parish Churches were built. It’s presumed that the graveyard was used for burials when the very first Bruton Parish Church was built at Middle Plantation in 1683 about one hundred feet away from the present-day church.

The majority of Bruton’s burials are no longer marked, tombstones weathered away by time. As the church graveyard grew crowded over the centuries, burials were halted and a new community center called Cedar Grove was established. More recently, the burial of cremated remains of Bruton parish members has been permitted within the area of the old graveyard.

Thomas Ludwell was an appropriate first burial at Bruton Graveyard. Several of Bruton’s more important burials are in the church itself, following the medieval practice of burying important statesmen and churchmen under the floor of the church or cathedral. Such is the case of Daniel Parke I, who succeeded Thomas Ludwell as colonial secretary and died near Williamsburg in 1679. Also beneath the original church, “in full hope of a joyful resurrection,” lies Col. John Page, who gave the land for Bruton Church. He died in 1690.

Many other notable burials are at the Bruton Parish Graveyard, including statesman Edmund Pendleton, past Reverends and Rectors, and other early Williamsburg figures and prominent families.

Included in these burials is the Jones family. The Jones grave markers at the Bruton Parish Graveyard sit as a reminder of the hurt that Rev. Jones caused his first wife. With his and his first wife’s graves separated by his second wife, one can see the betrayal laid out before them. Witnesses are said to see the spirit of Jones’ first wife wandering the grounds of the cemetery and sitting in the adjoining Bruton Parish Church’s pews.

Some even hear the church organ playing late into the night and even the disembodied cries of Reverend Jones’ broken-hearted first wife are heard echoing the cemetery around dusk.